PRETENDING THEY DON'T EXIST: How to kill your children with guns through ignorance

Like many superstitious parents who think of themselves as educated, progressive, and evolved, Alicia Glover is actually a near-paranoid setting her children up for failure:

It mystifies Alicia that Americans continue to own guns when mass shootings occur several times a year.

And Alicia wasn’t convinced before of the need for a total ban on weapons in the U.S., the events at Sandy Hook Elementary School on Dec. 14, 2012, gave her certainty.

“Irrespective of constitutional rights, people have human rights,” she said, adding that children should be able to go to school without the threat of being murdered.

It wasn’t until she moved to Michigan that she got her first close look at a gun. Once, when Callum was a toddler, he cut his head open after taking a fall. The family called 911 and within minutes a sheriff’s deputy and paramedics arrived.

The deputy carried his service weapon on his hip when he entered her home, and it terrified Alicia.

“I couldn’t take my eyes off of it,” she said. “I thought it was going to fall out and go off. I didn’t want it in the house.”

That’s the only time a real firearm has been inside her home.

Alicia Glover is incredibly ignorant and paranoid of firearms, and it will affect her children’s future. Her sons Thomas and Callum are fascinated by the guns they find in popular entertainment, despite Glover’s zealous attempts to ban any and all access to any media source that might reference violence. While she can create a den of ignorance in her home, her sons will grow up and they will be exposed to a wider culture where there are firearms.

Whether they survive that interaction depends upon education, and in that area of their lives, Alicia is failing her sons miserably.

Their interaction with firearms will occur, whether Glover’s family remains here in the United States or flees back to her native Australia, where the nation is now coming to grips that their draconian gun reforms had had no measurable impact on crime, and where gun ownership is once again rising.

Gun ownership is rising and there is no definitive evidence that a decade of restrictive firearms laws has done anything to reduce weapon-related crime, according to NSW’s top criminal statistician.

The latest figures show a renaissance in firearm ownership in the state – a 25 per cent increase in three years. And the head of the Bureau of Crime Statistics and Research, Don Weatherburn, said falls in armed robberies and abductions in NSW in the past few years had more to do with the heroin drought and good policing than firearms legislation.

Even falls in the homicide rate, which have been steady, began long before the gun law debate provoked by the Port Arthur massacre in 1996.

Nationwide, the proportion of robberies involving weapons is the same as it was in 1996, while the proportion of abductions involving weapons is higher, the latest Australian Bureau of Statistics figures reveal. They show a mixed result in firearms-related offences since the mid-1990s. There has been a fall in firearms murders (from 32 to 13 per cent) but a rise (19 to 23 per cent) in attempted murders involving guns.

Alicia Glover’s anti-gun paranoia is so strong that it has cost her relationships and has isolated her family. That is bad enough as it is, but isn’t the worst effects her superstitious behavior is having on her children. By treating firearms as if they are forbidden fruit, she’s already made firearms special in the eyes of her children, something to be coveted and discussed in reverent tones when mommy is away, as the article plainly shows.

She’s set her children up for potentially deadly failure when they finally do encounter firearms, because they have no idea at all about how to handle firearms safely and responsibly.

A smart parent acknowledges that it is more intelligent to teach children how to safely interact with firearms instead of pretending like they don’t exist, as a father in Louisiana recently noted during a youth gun safety class.

“As a parent, that’s the best thing in the world. Watching them grow up, educate themselves about either firearms or anything else. Education is very important,” Kevin Pavlick, parent of two boys who took the class, said.

Pavlick said it’s important for his children and other children to learn about gun safety and responsibility.

“Fire arms are prevalent. They’re around. It’s not about just having a firearm at your house, it’s somebody else could have a firearm,” Pavlick said. Having his children have the knowledge of what to do with a firearm and how to safely handle them is very important.

“It’s very important so that nothing happens in your home, but nothing might not happen at somebody else’s home even if you don’t own a firearm,” he said.

Your fear and ignorance will not protect your children, Mrs. Glover.

As it is in every other aspect of life, education is key. 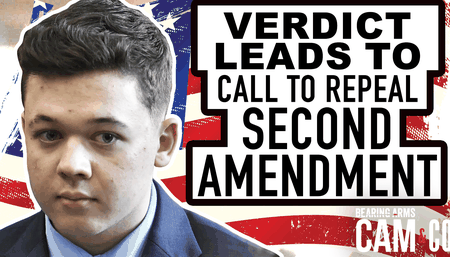