I woke up this morning to an email from a high school sophomore from the San Francisco Bay area, inquiring about my thoughts on the Black Lives Matter movement.

He believes that Black Lives Matter, “encourages equality and spreads awareness about the racism that is still occurring worldwide,” and wanted to know what I thought about both BLM and how it relates to the right to bear arms.

Here is my full response.

Black Lives Matter is an attempt by left wing radicals to delegitimize local law enforcement in hopes of building a public cry for federalized police more easily controlled by a centralized government.

Put frankly, you’ve been conned by people advocating “social justice,” which is nothing more than poorly blended racism and university Marxism.

It should send up a red flag, sir, when activists make a charge and craft a narrative that falls apart when compared against hard evidence. The activists then rush to the next outrage, misstate the facts, and the cycle repeats.

What do you find when you look at fully-developed investigations, Mr. N___?

You find that when actual subject matter experts on the use of force look at all the evidence, that these incidents are moral, just, and fair more than 90-percent of the time, and that the early narratives crafted by Black Lives Matter and reported by the media were almost always lies.

You’ve been lied to repeatedly, sir, and you’ve swallowed it hook, line, and sinker.

The narrative crafted around Trayvon Martin was that he was “stalked” by George Zimmerman and then “stood his ground” and was “murdered.”

In reality, Trayvon Martin was a serial burglar, multiple drug abuser, and gun trafficker who delighted in street fighting and hurting other people. George Zimmerman was not even the first person he attacked that day. Zimmerman was walking back to his truck when Martin attacked him from behind, then tried to beat him to death. Dennis Root, the use of force expert that testified at the trial, said Zimmerman should have fired in self-defense far earlier than he did. He was right. Zimmerman was acquitted because despite the narrative, the facts and the evidence showed that Trayvon Martin wasn’t a little angel. He was hardened, violent criminal shot and killed while committing felony assault.

Let’s look at Michael Brown in Ferguson, where “Black Lives Matter” really took off. The narrative was “hands up, don’t shoot,” and that Brown was shot and killed while running away.

All the facts and evidence (and six eyewitnesses) put that lie to rest in both state and federal investigations that shows Michael Brown attempted to take officer Darren Wilson’s gun, was shot in a struggle over the gun in the vehicle, and then was shot and killed after he turned and charged Wilson. The final killing shots were fired as the NFL-lineman sized Brown lowered his head in a bull-rush in which Brown intended to taken down Wilson, get his firearm, and presumably murder Officer Wilson with it.

Like the Trayvon Martin narrative, the fiction of “hands up, don’t shoot” was proven to be an abject lie. But Black Lives Matter doesn’t care about truth or facts or evidence. They care about manipulating the poorly-educated and easily led.

Let’s move on the more current shooting of Alton Sterling in Baton Rouge earlier this year.

Alton Sterling was a convicted sex offender with a criminal record of domestic violence and resisting arrest while armed. He threatened a homeless man with a gun he illegally acquired, refused to be arrested, was tased, and when the tasers did not work (they tried to tase him twice), they tried to physically tackle him and take him into custody. During the struggle, officers found the revolver in Sterling’s pocket and warned him not to reach for it. Sterling’s response–recorded in high definition by the convenience store owner’s cell phone camera–was to try to buck off the officer straddling him and to reach for the gun. Of course they shot him, and they should have.

Black Lives Matter-aligned gunmen then carried out “reprisal attacks” against Dallas and Baton Rouge police based on the abject lie that Sterling was “murdered.”

Mr. N___, when the investigation is concluded, these officers will be commended for a textbook use of force. They were 100% legally and morally justified in shooting Alton Sterling.

Let’s flash forward to today, and the shooting of Terence Crutcher in Tulsa, Oklahoma on Friday by officer Betty Shelby. The video was just released yesterday.

Once again, Black Lives Matter is pushing the lie that he was shot with his hands up, walking away. The national news media is reporting it that way as well.

Let me show you something that you’re not used to seeing, Mr. N___: the truth.

This is a still-frame shot from an orbiting police helicopter called in by Officer Shelby. You’ll note that she had been joined by Officer Tyler Turnbough. Within two seconds, two more officers will be in this picture, and several more will respond as well.

Despite the claim he was shot with his hands up while walking away, the still-frame clearly shows that Crutcher has walked back to his vehicle, and turned to the driver’s side door. If you look at the red oval, you’ll see Mr. Crutcher’s forearm and hand, which he dropped to his waist.

His hands are clearly not up, are they Mr. N___? He was shot within a second of this.

Like the stories of Trayvon Martin, Michael Brown, and Alton Sterling, the narrative being crafted around the death of Terence Crutcher is an obvious and easily proven (in a single photograph) lie.

Black Lives Matter is a lie, Mr. N___, from start to finish, and it is being used to incite domestic terrorism.

It does not encourage “equality.” It encourages people to break the law, and to avoid lawful police commands designed to protect officers and citizens alike.

It does not spread “awareness of racism.” Quite to the contrary, Black Lives Matter encourages racism, specifically asserting that minorities do not have to follow the same laws as everyone else.

Actual equality is everyone being treated the same under the law.

Black Lives Matter is attempting to claim that blacks are being treated more poorly than whites (disproven by the fact whites are more likely to be shot for the same actions both in terms of raw and per capita data) and give blacks privilege to act differently under the law.

Do you want to know why people are being shot by police, Mr. N___?

It’s because they are foolishly choosing to believe that the laws governing the use of deadly force do not apply to them.

In terms of actual data, the criminal use of firearms in homicides is the lowest it has ever been in recorded American history since the FBI began collecting that data 6 decades ago. Accidental deaths have been declining since 1903 (and have plummeted in the past 20 years in particular thanks to efforts by the gun industry to ensure safe storage). This is occurring as gun ownership and the number of firearms in society has dramatically increased, and more than 14 million people are carrying concealed weapons.

Put bluntly, Mr. N___, you’ve been sold a pack of lies by the media, by your politicians, by Black Lives Matter, and more than likely your Bay Area education system, which has a noted and infamous bias towards progressive tendencies, to the point of driving out all dissenting views.

Thank you for having an open enough mind to look beyond those lock-step ideas to look for those dissenting views and opposing ideas. That is rare these days, and is to be actively encouraged. 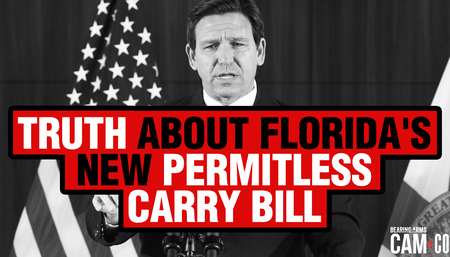