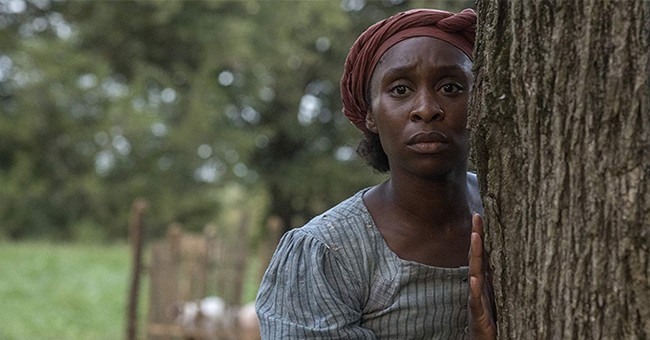 I’ll admit up front that I’m a history nerd, particularly American history, and I get a little excited when Hollywood makes a great movie that helps us learn a little more of our shared story in an entertaining and engrossing way. It looks like director Kasi Lemmons has done exactly that with “Tubman”, the bio-pic of the escaped slave and Underground Railroad conductor Harriet Tubman, whose heroic deeds brought dozens of men, women, and children out of bondage.

I counted a gun in the hands of Tubman at least six times in the 2:40 second trailer, which is a pretty good assumption that Lemons isn’t going to gloss over the fact that Tubman’s ability to free slaves depended, at least in part, on her willingness to defend herself from those who were trying to kill her for her efforts.

Gun control activists may not be happy about this even-handed portrayal. After all, gun control groups have a lot of allies in Hollywood, and they’ve been successful at introducing anti-gun plot lines into Hollywood productions. I’m sure they’d much prefer Harriet Tubman simply use her brain to work her way out of the terrifying moments where she was close to discovery, capture, and death. Why does the hero need a gun?

Well, the answer is she would have likely died without one, and it would be an egregious misrepresentation of history to pretend otherwise, just as egregious as having the slave catchers use sweet words and the promise of a $15 an hour minimum wage to lure slaves back to their masters. The Civil War was force on force on a massive scale, and the trailer for Tubman shows how force was a part of how the conflict played out among individuals, both private citizens and officers of the State, before and during the war. At its heart was a fundamental disagreement over what freedom meant.

Thankfully our American ancestors chose the first definition, but not without a great deal of blood and treasure spilled, and not without great risk and cost to themselves and our nation. I don’t view our nation’s inability to deal with slavery at the time of the writing of the Constitution as an original sin that can never be forgiven or washed away, but as a near fatal flaw. The Civil War was the tragic culmination of the inability of the Founders to bring the framework of government fully in alignment with its principles that all men are created equal and are endowed by their Creator with certain unalienable rights like the right to live, liberty, and the pursuit of happiness.

Sadly, though, we’re still engaged in a political battle over the definition of freedom. Think about all of the gun control laws that Harriet Tubman violated in the trailer above. Did Tubman have a license for that pistol she was carrying? How’d she get that gun anyway? Clearly she didn’t go through a background check, because she would have shown up on the National Instant Check System (And Fugitive Slave Recovery Tool). Wasn’t that rifle she was using the same or similar high-powered weapon of war used by the Union troops? Some people clearly thought Tubman was crazy for going into the South to free slaves. Shouldn’t they have tried to use a red-flag firearms law to take her guns away? If today’s Democrats had their way (actually, if yesterday’s pro-slavery Democrats had their way too), Harriet Tubman would be looking at decades behind bars in a federal prison.

We can still find heroes in the most tragic of circumstance, and Harriet Tubman is unquestionably one of them. On a scale of “I’ll rent this from Redbox” to “I’ll drive an hour to Richmond to see this in a movie theater with great sound and stadium seating”, I’ll be hopping behind the wheel when Tubman hits the theaters on November 1st of this year.

Gun Sales Down, Violent Crime Up In Colorado