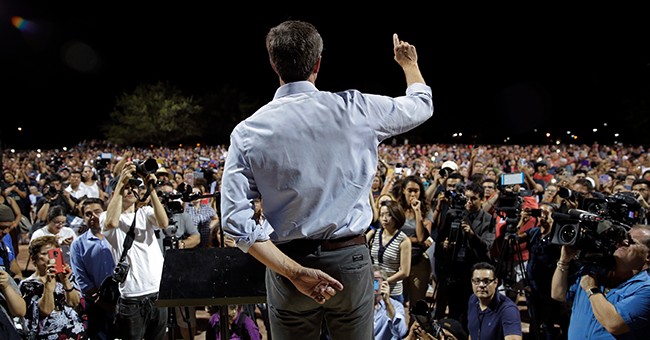 A day after hitting the “reset” button on his presidential campaign, former Texas Congressman Beto O’Rourke has unveiled his new gun control plan, calling for gun licensing, a ban on semi-automatic rifles and a compensated confiscation program, mandates for “microstamping” all new handguns, “universal background checks” and more. Beto didn’t take my advice and call for full repeal of the 2nd Amendment, which frankly would have been easier position for him to defend than the garbage he’s demanding.  Let’s take a look, shall we?

Beto will work with Congress to create a nationwide gun licensing system that will ensure individuals seeking a gun undergo an assessment by law enforcement and a background check. Individuals must be 21 years old to receive a license, will be required to complete a certified gun safety training, and will need to renew their licenses every five years. Individuals will also be required to register their guns through a registry and all new handguns will be microstamped. In recognition of the country’s long hunting tradition, those under 21 with hunting licenses will be able to lawfully possess firearms for hunting. States will have the flexibility to administer their own licensing systems, allowing them to set higher standards.  Where a state does not have a system in place, the federal government will administer the system.

Gun control activists are pushing for a gun licensing program because it reduces the number of legal gun owners; Americans who look at the maze of red tape they have to navigate in order to exercise a right and decide it’s just not worth it.  Under Beto’s plan, the licensing system would impose a de facto age limit of 21 in order to be able to legally own a firearm. Individuals would also have to take a “certified gun safety training” course, but what happens when your city or county doesn’t offer the course? Right now, residents of Washington, D.C who wish to obtain a concealed carry license, for instance, have to travel outside of the District to take the required training courses, because they’re not offered in the District itself. Beto’s microstamping mandate would amount to a ban on new handguns, since it’s impossible to comply with the requirements of the microstamping law. His firearm registration scheme raises issues of both compliance and privacy, especially given the fact that there’s been almost 450 federal data breaches in just the past five years.

Since the assault weapons ban expired in 2004, mass shootings have skyrocketed and become deadlier. Beto will work with Congress to ban the manufacturing, sale, and possession of military-style assault weapons and high-capacity magazines.

Beto wants to not only ban the future sale of any of his banned guns and magazines, he wants to criminalize the continued possession of those items as well.

This is the best example of the fundamental unseriousness of Beto’s proposals. He believes “weapons of war” should be banned and people should be required to hand them over to the government. If they decide to violate the law and keep these “weapons of war”, they’ll be… fined? Fined? Does Beto really believe that any criminal planning to use one of his banned guns in a crime is going to be stopped by the possibility of being fined afterwards?

As president, Beto will limit individuals to one gun purchase per month and direct ATF to deem any individual or business that sells over five guns in a single year a gun “dealer.” Dealers are subject to background check requirements.

As president, Beto will establish a federal red flag law, allowing police departments in states without red flag laws to petition in federal courts to have weapons removed from those who present a danger to themselves or others. Beto will also work with Congress to close loopholes that allow dangerous individuals and domestic abusers from accessing guns, including the private sale loophole (online and gun shows), the boyfriend loophole, and the Charleston loophole.

So, Beto’s “red flag” law would apparently involve a federal standard and federal courts, though what legal standard would be used is left unsaid. Issues regarding due process and any sort of mental health or behavioral treatment are also ignored under Beto’s plan. The “loopholes” that Beto mentions aren’t really loopholes at all, but are either offshoots of his plan to require background checks on all firearms transfers, or new laws that would lower the standard of prohibited persons to include individuals convicted of some misdemeanor offenses.

O’Rourke’s plan also calls for declaring a gun violence a “public health emergency” as well as introducing a federal “gun trafficking” law that would make “gun trafficking and straw purchases” a federal crime. Straw purchases already are illegal under existing federal law, which is something Beto either doesn’t know or doesn’t care about.

With the exception of a federal gun trafficking law, virtually every one of Beto’s proposals are aimed squarely at legal gun owners, not those who use guns in the commission of a crime. His proposals would turn tens of millions of legal gun owners into criminals overnight if they continued to possess the most commonly sold rifles and magazines today, though the only criminal penalty he suggests would be a fine.

What would happen under Beto’s plan if someone is caught in possession of a firearm without a federal gun license, or a licensed owner is found with an unregistered firearm? Would they be fined? Would they face prison time? Beto doesn’t say.

Beto’s new gun control agenda manages to be a trifecta of bad legislation: almost every proposal is either unenforceable, ineffective, or unconstitutional. It turns a right into a privilege to be doled out by the State, would reduce legal gun ownership far more than it would impact criminal activity, bans virtually all new handguns through a microstamping law that’s impossible to comply with, and would instantly create a criminal class of tens of millions of Americans who are currently legal gun owners.

Instead of focusing on the incredibly small number of individuals across the country who are drivers of violent crime, Beto O’Rourke is choosing to focus on the incredibly large number of legal gun owners who will never commit a violent crime to begin with. It’s trickle down gun control- pass laws that impact the law-abiding in the hopes that the effects will trickle down to the criminal element. O’Rourke’s proposal may be multi-faceted and broad, but it is still a fundamentally unserious solution to a very serious problem.