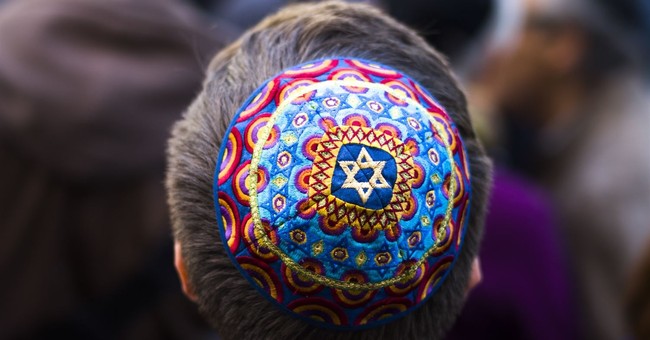 New York City is in the midst of a spike in crimes against the city’s Orthodox Jewish population, with one of the latest attacks involving a rabbi out jogging who was assaulted by a man with a paving stone. Rabbi Abraham Gopin says that was just the start of the incident.

Then, he jumped on me and started to fight with me, trying to knock me in the face — probably, I would say, 20, 25, 30 times with his fists…He said ‘Jew, Jew.’ He said something in that direction,” Gopin continued. “He was for certain looking to kill.”

It is no isolated incident. Anti-Semitic attacks, more than half of all hate crimes reported to the NYPD, are up 66% from last year, to 133. Orthodox Jews have been spit on, punched or both in Crown Heights, Borough Park and Williamsburg.

In his tweet thread, Mandel noted the incredibly restrictive policies that New York City puts in place when it comes to issuing carry licenses, and demanded something change.

NYC has essentially rendered 2A irrelevant, disarming the Jews they won’t help. Permits should be applied for by everyone, some are bound to be given access to their constitutional right. Form larger and more active shmira orgs. Become police officers.

And bring in the Israelis.

It might actually be easier to become a police officer in New York than it would be to get a concealed carry license. There are around 36,000 NYPD officers, but according to the latest statistics I could find, only about 4,000 licenses to carry in the five boroughs.

Many in the city’s Jewish community are demanding that Mayor Bill de Blasio do more to combat the growing anti-Semitism in the city, and are taking him to task for his lukewarm reaction to date.

Jews of all ages are subjected to violent attacks, along with daily cases of more mundane forms of harassment. The incidents aren’t exactly a secret. It didn’t take long for Mayor Bill de Blasio to tweet about the attack on Gopin, announcing that the NYPD’s Hate Crimes Task Force was on the case. Of course, this is about the bare minimum one could reasonably expect in reaction to an incident in which the attacker allegedly called his victim a “dirty Jew” before smashing him in the face with a large stone. Everyone knows that violence against Jews in the city has climbed sharply over the past couple of years, and yet City Hall has offered little in the way of a specific or organized response to the problem.

If de Blasio does step up, one thing we know for sure is that he won’t be making it any easier for anyone to carry a firearm for self-defense. The process of becoming a concealed carry licensee in the city will continue to take months, cost hundreds of dollars, and will likely end in failure for most applicants. Mayor de Blasio would undoubtably say that New Yorkers are safer because of the restrictive licensing laws, but as Rabbi Gopin could tell him, the gun control laws in New York didn’t stop him from nearly being murdered with a rock. Self-defense is a human right, and the right to keep and bear arms is a constitutionally protected right. In New York city, however, both are increasingly seen as a privilege granted by the authorities.

Muddling Of Facts On Destroying NH Guns Might Be Intentional