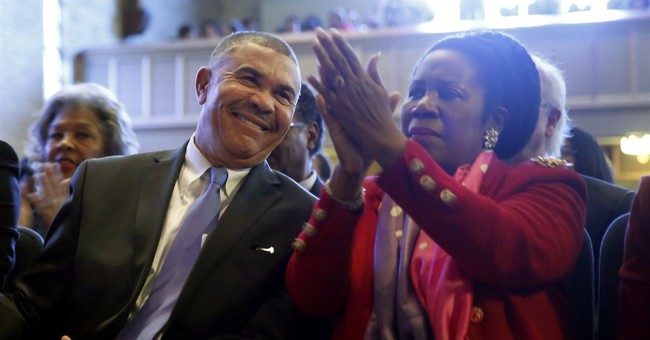 Missouri Rep. William Lacy Clay claims we’ve reached a “tipping point” on gun control, and is hoping that means we’ll see new gun control laws passed by Congress and signed by President Donald Trump. We recently discussed the congressman’s new bill that would gut firearms preemption laws across the nation and allow for cities to pass sweeping gun bans, institute gun licensing and firearms registration laws, as well as impose onerous taxes on firearms and ammunition and other measures that would eviscerate the 2nd Amendment rights of law-abiding Americans. The bill, known as the Local Public Health and Safety Protection Act, is a fairly new bill that was introduced in late June, but the legislation is already drawing support from some of the far Left in Congress.

The bill, HR 3435, was introduced to the House in June and is co-sponsored by over 20 congressmen, including Rep. Emanuel Cleaver II, D-Kansas City; Rep. Ayanna Pressley, D-Massachusetts; and Rep. Alexandria Ocasio-Cortez, D-New York.

“We need Congress to act now,” Clay said. “Congress has the power to save American lives, and we should be doing nothing less.”

When it comes to gun violence, Clay said he is tired of the excuses from state legislatures and those who will not do anything about it because they are afraid of the National Rifle Association.

Opposition to Clay’s measure has little to do with being afraid of the NRA, and everything to do with using the federal government to allow localities to obliterate the 2nd Amendment rights of residents. Under Clay’s proposal, any state that is applying for grant money from the Department of Justice (which is every state in the union), must guarantee that cities and local governments have the power to impose draconian gun control laws that would dramatically curtail the legal ownership of firearms, while doing nothing to stop criminals from illegally obtaining guns.

After Clay made his remarks, the fired-up aldermanic President Lewis Reed excited the crowd with his own speech. He shared that he, too, has family members who were affected by gun violence and that each time he sees another child’s life taken due to gun violence, his heart aches.

“I know it’s some things we all can be doing and things Republicans can be doing to help us get to the bottom of this,” Reed said. “We are going to have to push them and drive them to some place where they are uncomfortable being.”

Reed also endorsed Clay’s new bill and said it can be something to transform the nation.

It shouldn’t just be Republicans who are uncomfortable with curtailing the rights of law-abiding Americans in an attempt to bring criminals to heel. Democrats, Libertarians, and independents should be vehemently opposed to restrictions on legal gun ownership while criminals in the city are literally getting away with murder.

Alderman Jeffrey Boyd of the city’s 22nd Ward, which runs from about Page Boulevard north to Interstate 70 on the western edge of St. Louis, said lack of cooperation with police was one problem hampering many neighborhoods, especially black ones.

“We have to figure out a way to solve that and make it so people are willing to be witnesses,” he said. “Because (killers will) come out and kill again because nobody wants to testify. Then people start moving out of the neighborhood, and then you have what we have in north St. Louis.”

While Rep. Clay is hoping to use federal legislation to disarm legal gun owners, they’re not the ones driving crime in cities like St. Louis and Kansas City. There are about 800,000 people living in those two cities, and less than 1% of them will commit a murder or a non-fatal shooting this year. You might have 2-3,000 people responsible for a majority of armed violence in both cities combined, and the vast majority of them are well known to law enforcement and residents of high crime neighborhoods. As St. Louis’ chief of police noted back in 2017, one of the biggest problems in terms of dealing with those violent offenders is getting cooperation and help from the community.

Hayden said he believed fear of retaliation was the biggest obstacle in solving crimes, and that’s why the department has CrimeStoppers — a tip line that allows callers to remain anonymous and get cash rewards if their information leads to an arrest.

Despite that promise of anonymity, Hayden noted, police still struggle to get leads.

Controversial police shootings of black men by white officers also can contribute to a “trust gap” between police and residents of high-crime black neighborhoods, whether or not the shootings turn out to be justified, Hayden said.

But he’s convinced those incidents don’t prevent people from talking to police as much as fear of criminals in their neighborhoods, Hayden said. When there is a perception that the predominantly white police departments don’t care about those communities, Hayden said, some may think: “Why take the risk and cooperate?”

“The fear of retaliation is an explanation in most instances, but it doesn’t absolve us from our responsibilities,” he said.

It is unquestionably a challenge to rebuild the relationship between local law enforcement and residents of high crime neighborhoods, but it absolutely can be done, and the impact on violent crime is dramatic when the two groups begin to cooperate and collaborate. We know that a city like Chicago can ban handguns entirely and still have hundreds of homicides. We also know that a city like Cincinnati can reduce homicides by 40% or more simply by focusing on the most violent offenders and greater cooperation between law enforcement and the community at large. Rep. Clay’s legislation would be a huge step backwards in terms of public safety, not a way forward towards safer cities.