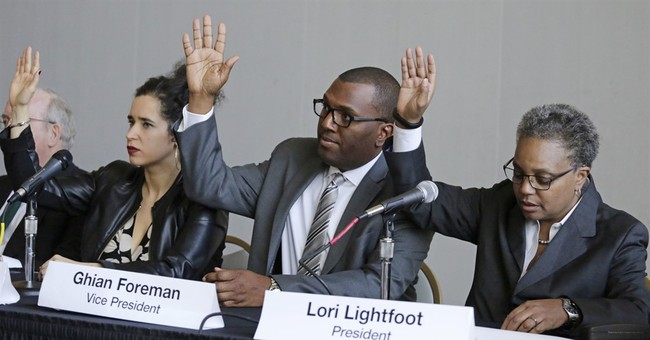 After engaging in a Twitter fight last week with U.S. Sen. Ted Cruz, Mayor Lori Lightfoot has invited the Texas Republican to pay a visit to Chicago’s South and West sides.

Lightfoot said Monday she’d “love for him to walk the streets on the West Side and the South Side with me, if he really wants to do something to be helpful.”

“Helpful” in this case means “help me raise my media profile”, not “help make Chicago safer”. Unfortunately Mayor Lightfoot is doubling down on the idea that what will really make Chicago safer are unenforceable “universal background check” laws.

“I still am mystified given the horrible tragedies that have happened in Texas recently that he chose to make an attack on Chicago in the midst of all that. I would think he’s got his hands full with the challenges helping heal the communities that have been broken by these horrible gun tragedies in Texas,” Lightfoot said.

“But if he wants to talk about Chicago, come on, come here, we’ll welcome him and we’ll take him and let him see firsthand what the realities are, the progress that we’re making (and) the ways the federal government can help starting with pushing Mitch McConnell to finally, finally pass a full background check bill.”

Lightfoot claims that “as long as people can drive from Illinois to Indiana and purchase a personal arsenal without a background check, Chicago’s gun laws will always be as weak as those of the closest permissive state”, but data shows that the number one source state for firearms traced in Chicago is Illinois, not Indiana. Besides, using trace data is an awful and sloppy argument. If someone legally purchases a gun in Indiana, and it’s stolen and recovered in Chicago, how are Indiana’s gun laws to blame? Or, if someone legally buys a gun as an Ohio resident, but later moves to Illinois and has their home broken into and their firearms stolen, are Ohio’s gun laws involved in any way? Not every firearm that’s traced is even used in a crime. But it’s Lightfoot’s strongest talking point, and she’s sticking to it.

It’s telling that Mayor Lightfoot would rather talk about Indiana’s gun laws than Chicago’s criminal justice system, where slaps on the wrist are routinely handed out instead of serious prison time, as a story in today’s Chicago Sun-Times demonstrates.

A man is wanted for murder in a Humboldt Park shooting last month that killed a man and critically wounded a woman.

On Aug. 23, Sumrell and the woman were shot in the 4200 block of Iowa Street, authorities have said. Sumrell was struck seven times, and the woman three times.

Both Davis and his alleged accomplice, Antwane Lashley, are familiar with courtrooms in Chicago. Lashley was charged with aggravated unlawful use of a weapon earlier this summer, and Davis received time served and 18 months of probation (which he “unsatisfactorily completed”) for a weapons charge back in 2014. If Lori Lightfoot does get Ted Cruz to come to Chicago, maybe he can take her to the Cook County courthouse after they tour the city’s neighborhoods being traumatized by violent criminals.