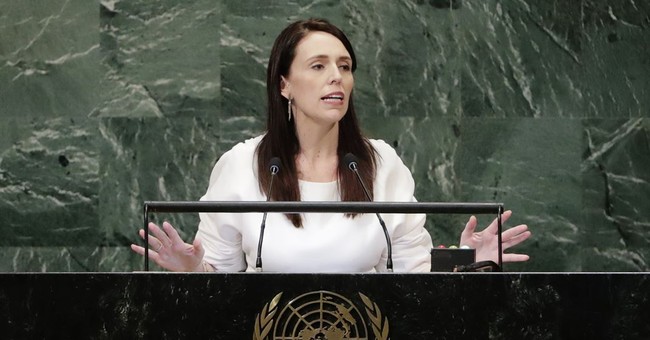 At the United Nations on Monday, New Zealand Prime Minister Jacinda Ardern had a conversation with Donald Trump that included a discussion about her country’s ban on semi-automatic firearms and it’s ongoing attempts to purchase banned weapons. I’ve seen a lot of headlines about Trump supposedly showing interest in the compensated confiscation program, but I don’t think “interest” in this case is a synonym for “support.” I’d be pretty interested to talk with Jacinda Ardern about her gun ban, but I wouldn’t ever support it.

“It was a conversation around our buyback and obviously the work that we have done to remove military-style semi-automatics weapons and assault rifles,” Ardern said.

“We had a conversation around what had happened in New Zealand, how it worked, and I referenced the fact that actually Australia had gone through a similar process and we really learned from them. It was really just sharing our experience, which obviously is pretty unique.”

Even in New Zealand, the push for gun control has started to run up against opposition. After near-unanimous majorities approved the semi-auto ban and compensated confiscation program, Ardern’s demand for a gun registry and other restrictions are opposed by a significant number of politicians (and an even larger number of gun owners).

Unsurprisingly, extreme pro-gun owners on the Kiwi Gun Blog page oppose a register and the idea of a five-year licence, instead advocating for a lifetime licence.

But opposition went further than what is often described as the “vocal minority” to include Federated Farmers, National and ACT.

“Misgivings about the practicality and cost of a firearms register is likely to dominate feedback from rural areas on the second round of proposed Arms Act amendments,” Federated Farmers said in its press release.

The organisation’s safety spokesperson Miles Anderson said the group had opposed a register in the past, and the successful re-establishment of this system would require a considerable investment, both economically and socially.

I doubt Ardern brought that up in her conversation with President Trump. As for the president, he may have expressed (or feigned) interest in Ardern’s talk of a gun ban and compensated confiscation plan, but on the same day he talked gun control with the New Zealand prime minister he also bashed Beto O’Rourke for his own “ban and buyback” scheme.

“I saw this character from Texas,” Trump said of O’Rourke following a meeting in New York with the South Korean president. “Can’t imagine he’ll get one vote.”

Trump added: “When Beto starts talking about confiscating guns, it makes it much tougher. Democrats are wasting so much time on nonsense.”

The media will play up Ardern’s comment about Trump expressing “interest” in New Zealand’s gun ban, but how many outlets will bother to report that the very same day Trump called the idea of a similar ban and confiscation here in the United States “nonsense”? I have no idea what the president will ultimately do when it comes to support for any additional gun control measures, but there’s zero chance he comes out in favor of banning and confiscating the most commonly sold rifle in the United States today.

MI Activist Explains Why He Offered Armed Escort To Lawmaker

MI Activist Explains Why He Offered Armed Escort To Lawmaker