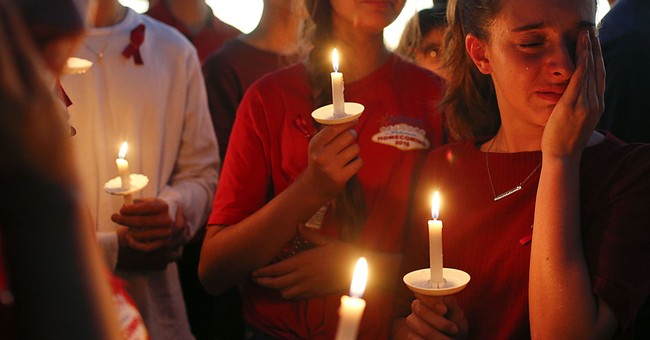 A study conducted by the U.S. Secret Service’s National Threat Assessment Center of 41 separate school attacks released on Thursday found a common pattern among the killers; they were bullied, got in trouble at school, and were never reported to authorities, no matter how bothered others might have been by their behavior.

“These are not sudden, impulsive acts where a student suddenly gets disgruntled,” Lina Alathari, the center’s head, said in an Associated Press interview. “The majority of these incidents are preventable.”

The fathers of three students killed in 2018 at Marjory Stoneman Douglas High School in Parkland, Florida, attended a media conference Thursday in support of the study.

Tony Montalto, whose daughter, Gina Rose Montalto, died, said the research was invaluable and could have helped their school prevent the attack.

“My lovely daughter might still be here today,” he said. “Our entire community would be whole instead of forever shaken.”

Montalto urged other schools to pay attention to the research.

“Please, learn from our experience,” he said. “It happened to us, and it could happen to your community, too.”

Ryan Petty, whose daughter Alaina was murdered in the attack at Marjory Stoneman Douglas, was also on hand for the release of the report.

The new @SecretService report on targeted school violence is out. This will make our nation’s schools safer! https://t.co/uObCscLGMV pic.twitter.com/3wPAJW5DK2

Many of the Parkland families have complained that the killer (who will not be named here) exhibited many warning signs and even violated the law, but that the school district minimized and failed to adequately address his behavioral issues long before the shootings took place. According to the new report, that’s not uncommon.

There’s no clear profile of a school attacker, but some details stand out: Many were absent from school before the attack, often through a school suspension; they were treated poorly by their peers in person, not just online; they felt mistreated; some sought fame, while others were suicidal. They fixated on violence and watched it online, played games featuring it or read about it in books.

While the report doesn’t discuss armed teachers, it does contain some information about how these attacks play out that bolsters the argument for having an armed school staff member to act as a first response against an armed school assailant.

The shootings happened quickly and were usually over within a minute or less. Law enforcement rarely arrived before an attack was over. Attacks generally started during school hours and occurred in one location, such as a cafeteria, bathroom or classroom.

If the shootings are over in less than a minute, then you’re going to need someone on scene to stop it. “Law enforcement rarely arrived before an attack was over.” That means that, unless you leave it up to the shooter to decide to stop shooting, someone’s going to have to stop them. Why wouldn’t we want to give them the tools they need to do that?

Again, though, the report doesn’t get into the issue of armed school staff, or gun control for that matter. What it does do is offer an exhaustive look at these types of mass murders in an attempt to make the real changes necessary to prevent them from occurring. The good news is that the study’s authors believe we absolutely can do that, and they don’t talk about needing to ban guns, magazines, or repealing the Second Amendment to do so. We need to be smart, we need to be serious, and we need to be vigilant in recognizing those in crisis and getting them the help they need before they hurt themselves or others.

You can read the entire report for yourself here, and look for further analysis and a deep dive into the data here at Bearing Arms as well.