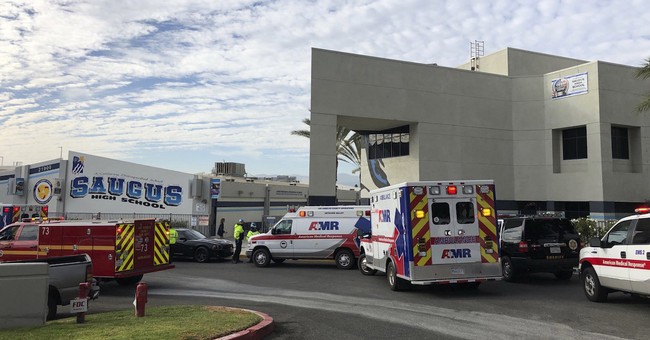 We’re learning more information about the shooting at Saugus High School in Santa Clarita, California today, though anti-gun politicians haven’t waited for facts to emerge before trying to shoehorn the tragedy into their own push for additional gun control laws. We now know that one student, a 16-year old girl, has lost her life in the attack, and four other students are being treated at a local hospital for their injuries.

We’re also learning a little more about the suspect.

Authorities did not release the teen’s name, but said Thursday is his 16th birthday. He is being treated at a hospital for a gunshot wound to the head, said Los Angeles Sheriff’s Department Capt. Kent Wegener.

Wegener said the teen was standing in the quad when he pulled a .45 caliber handgun from his backpack and opened fire at other students, before turning the gun on himself.

Even before these details had emerged, politicians were already weighing in and calling for more gun control. While Senator Richard Blumenthal called colleagues opposed to gun control “complicit” in the attack, Senator Kamala Harris demanded “reasonable gun safety laws” while appearing on CNN, and Pete Buttigieg blamed the NRA.

We don’t yet have all the details of the horrifying events in Santa Clarita. But we do know that in America today, children are scared to go to school. Parents and teachers are terrified. And that can’t stand. It is time to hold the NRA and our leaders in Washington accountable.

Meanwhile, gun control activists like Shannon Watts from Moms Demand Action are trying to pin the blame on Senate Majority Leader Mitch McConnell, with the hashtag #MassacreMitch trending on Twitter. What gun control law passed by the House would have prevented this attack? It doesn’t matter. As long as they can try to blame Republicans or “the gun lobby” for a shooting that happened in a state with the most restrictive gun control laws in the country and a government that’s completely controlled by Democrats, they will.

The truth is, the person responsible for this shooting shot himself in the head after trying to murder his classmates. I don’t know or care what this 16-year old’s political beliefs are. Neither Democrats nor Republicans are to blame for today’s shooting. However, it’s a fact that you can have universal background checks, a ten day waiting period on firearms purchases, background checks on ammunition purchases, an “assault weapons” ban, microstamping, a “high capacity” magazine ban, red flag laws, “safe storage” laws, age restrictions on purchasing firearms, and dozens of other gun control laws and still have an attack like this happen.

For every politician trying to use this tragedy to push their gun control agenda, there should be a dozen reporters asking them why, if all of California’s gun control laws didn’t prevent an attack like this, they claim that a federal universal background check or ban on semi-automatic rifles would?

Kamala Harris said on CNN today to “stop with the nonsense” and pass gun control. I say we need to stop the nonsense and quit pretending that gun control laws offer some sort of magical protection against these types of active assailant attacks. Nobody wants to see these types of attacks happen, but if they’re happening in states like California, with all of its gun control laws on the books, then maybe the answer doesn’t lie in trying to ban our way to safety.

The answers on how to prevent these attacks can’t be found in a gun control bill. Instead, they’re contained in a newly released Secret Service report on active assailant attacks on school grounds, and I think these politicians should give it a good read. In it, they’ll learn that virtually every one of these attacks could have been prevented, and not through more gun control. It’s almost certain that, as more details about the suspect are revealed, we’ll learn about warning signs and issues that went unaddressed.

The answer, as Ryan Petty, whose daughter Alaina was murdered at Marjory Stoneman Douglas High School, told me, is in identifying these few individuals before they act out to harm others and/or themselves, not trying to curtail the Second Amendment rights of law-abiding Americans. The Secret Service and its National Threat Assessment Center is currently training thousands of law enforcement and educators on tools to identify and help the few troubled souls who would ever engage in these heinous acts, and widespread implementation and adoption of these practices will do much more to improve the safety of our schools and students than all of the gun control platforms of all of the Democrats running for president combined.

The California model of banning our way to safety doesn’t work. It’s time to stop the nonsense and start working on things that do.