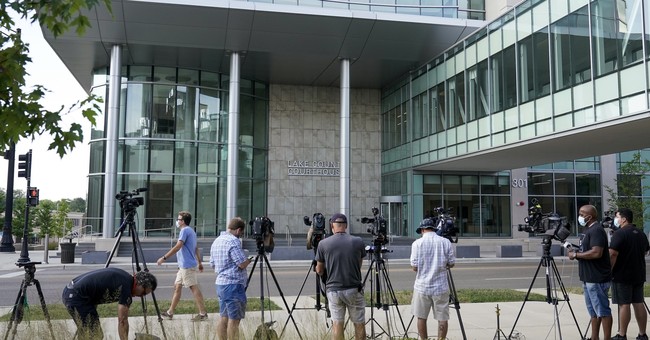 17-year old Kyle Rittenhouse addressed supporters via a phone call from behind bars on Tuesday night, after his attorney John Pierce tweeted out video of a phone call with his client. The Illinois teenager, who’s facing two homicide charges in the shootings of three demonstrators in Kenosha, Wisconsin, thanked “every single one of you from the bottom of my heart for the underlying support,” acknowledging “all the mail” that’s come his way and calling it “really helpful.”

I’m not sure this phone call was all that helpful to his case, however. As I’ve written before, the self-defense claim by Rittenhouse seems very strong. Even the prosecutor’s own charging documents don’t portray the teen as the initial aggressor, yet he’s still facing charges of intentionally killing Anthony Huber and Joseph Rosenbaum. It’s likely that prosecutors will try to make the case that Rittenhouse made the short drive from his home in northern Illinois to southern Wisconsin with the intent of finding trouble, rather than firing the fatal shots as a last-resort means of self-defense.

Rittenhouse’s comments themselves aren’t particularly bad, but there is a jarring moment early in the video released by Rittenhouse’s attorney John Pierce.

“What do you want to say to the fans?”

The fans? Not a good choice of words there. “Supporters” would have been fine. “Those backing you” would have worked. “Fans,” though? Really?

Regardless of how strong Rittenhouse’s claims of self-defense may be (and I think they’re pretty strong), these are incredibly serious charges that he’s facing. If convicted, Rittenhouse could be sentenced to life in prison, and prosecutors will use everything they can to try to portray Rittenhouse as a murderer and an awful person. A jailhouse phone call between an attorney and his client ordinarily wouldn’t be something that prosecutors could bring up in court. A phone call shared on social media, on the other hand, will absolutely be used by those trying to put Rittenhouse in prison.

What about the court of public opinion? Rittenhouse has been called a “white supremacist” by folks like Connecticut Sen. Chris Murphy and Massachusetts Rep. Ayanna Pressley, and his character has been attacked by countless others on the Left, who even circulated a photo of an armed woman at a protest and claimed it was Rittenhouse’s mother, even after the photographer publicly spoke out and said the picture was of another woman taken in another city on another day. Isn’t it important to fight back against these attempts at character assassination?

Of course it is, but not to the detriment of the actual legal defense, and I’m not convinced that Pierce’s tweet is going to do anything to help Rittenhouse in a court of law. It may not have any impact at all, but on balance, I think it’s far more likely to hurt his case than to aid in his defense. This was a message to Rittenhouse’s base of support, but his focus at the moment needs to be laser-focused on prosecutors and a potential jury pool.

There’s a reason why you haven’t heard any public statements from Stephen Baca, who’s accused of aggravated battery for shooting a demonstrator who attacked him in Albuquerque earlier this summer. You haven’t seen any social media featuring phone calls between Daniel Perry and his attorney since Perry shot and killed a protester in Austin, Texas, though Perry’s attorney has spoken to the press about his client and offered up details bolstering his case for self-defense. A defendant typically has far more to lose than gain by talking before a trial, and the best advice their attorney can offer is “Shut up and let me do the talking.”

But what about the McCloskeys? After all, they’re facing felony charges for allegedly pointing guns at protesters outside of their St. Louis home, and they’ve not only spoken out publicly about their case, they gave a speech at the RNC! That’s true, but there are a couple of big differences between the McCloskey case and Rittenhouse’s. First, both Mark and Patricia McCloskey are trial attorneys themselves, not a 17-year old with no legal experience. More importantly, the McCloskey’s have a safety net; Governor Brad Parsons has already said that he’ll pardon the couple if they ultimately are convicted, and Missouri Attorney General Eric Schmitt is trying to get the case thrown out.

Rittenhouse won’t have the backing of Wisconsin Governor Tony Evers, nor can he expect Wisconsin AG Josh Kaul to try to intervene to have the charges dismissed. Rittenhouse has no safety net, and the charges he faces are also far more serious than those leveled against the McCloskeys. As much as he might want to thank his supporters, Rittenhouse would be much better off keeping quiet and letting the lawyers do the talking.

Why Kidnapping Plotters Had “Ghost Guns”

Is 2020 Is Reshaping Californians’ Attitudes Towards 2A

Is 2020 Is Reshaping Californians’ Attitudes Towards 2A