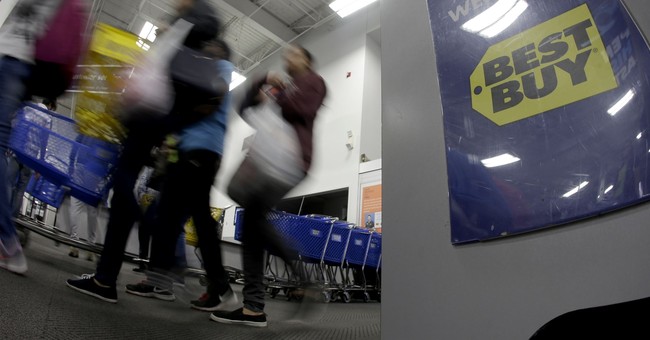 An armed citizen was forced to draw his gun and defend the life of a couple of Best Buy employees in Moore, Oklahoma, and thankfully was able to do so without ever having to pull the trigger.

It all started when three thieves decided to apply a five-fingered discount to thousands of dollars of electronics at that Best Buy. According to authorities, loss prevention employees were able to stop one of the suspects at the door, but two others managed to make it to their getaway car.

Instead of driving away, however, they ended up driving straight towards those employees and the suspect they had pinned to the ground. From KFOR in Oklahoma City:

The bystander said he believed they missed, then reversed, and it looked like they were going to charge again.

That’s when he said he decided to draw his weapon and point it towards the driver.

He said the driver stopped, put his hands up, then drove away from the scene.

Sgt. Lewis said police don’t encourage civilians to draw their weapons because it could result in worsening an already dangerous situation.

However, in this case, he said the bystander was well within the law.

“If an individual feels like they’re doing a service by protecting themselves or someone else that may be injured, then it’s hard to say they did the wrong thing,” Sgt. Lewis said. “In this situation, it turned out for the best.”

Indeed it did. Police say the three suspects are actually residents of Houston, Texas who made the trip to Oklahoma to gamble in some of the state’s casinos. Authorities believe they know who the other two suspects are, and even though they managed to get away, police are hopeful that they’ll be able to take them into custody with help from law enforcement in Texas.

We don’t know how this would have turned out if that armed citizen wasn’t in the parking lot, but it sounds like those suspects were about to make a very bad decision that could have led to injuries or death for the store employees. I doubt the corporation is going to officially thank the armed citizen for his actions, but maybe they’ll quietly slip him a few gift cards as a token of appreciation for putting his own life at risk to save others.

It’s also worth noting that Oklahoma is a permitless carry state, which means no license is required for legal gun owners to lawfully carry their firearms. Gun control advocates claimed that the the law, which went into effect earlier this year, would lead to “Wild West shootouts” across the state, but we haven’t seen anything like that happen. Instead, we’ve mostly seen stories of gun owners acting responsibly to protect themselves or others (with one notable exception being the self-proclaimed “Second Amendment Auditor” who got himself arrested for carrying where it’s not allowed). I fully expect to see more of the same in the future.