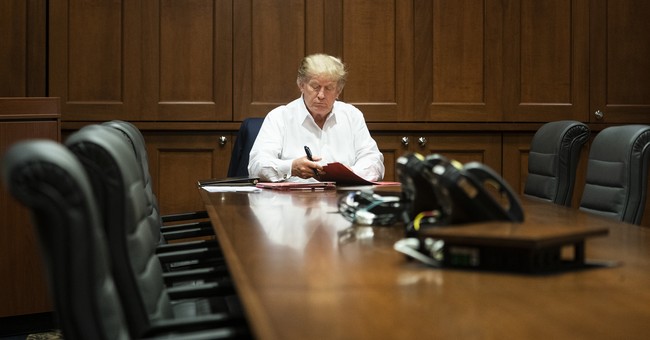 The president must be feeling better, or at least good enough for a old-fashioned tweet storm. Monday morning, Donald Trump issued a series of election-related tweets including one aimed at gun owners in Virginia.

Trump is right that Gov. Ralph Northam wants to obliterate the right to keep and bear arms in Virginia. After the legislature rejected Northam’s sweeping gun, magazine, and suppressor ban earlier this year, the governor vowed to bring the bill back for another vote next year. Northam was also successful in getting a half-dozen gun control laws approved by legislators this year, though many of them were watered-down in the process.

The Cook Political Report currently lists Virginia as “leaning Democrat” in the November elections, and there’ve been long lines of early voters reported in Democratic strongholds like Fairfax County and the city of Richmond. Gun owners and Second Amendment supporters could play an outsized role in this year’s vote, however. We’ve already seen the impact that the 2A community has had on local elections across the state since the passage of Northam’s gun laws, and there’s every reason to believe that gun owners are just as fired up to vote as they were to protest the Democratic gun control agenda when they showed up by the tens of thousands at county supervisors meetings across the state and at the Gun Lobby Day rally in Richmond back in January.

Of course, the threat to the Second Amendment isn’t just relegated to Virginia. The Biden/Harris campaign wants to impose a host of new federal gun control laws aimed at legal gun owners, starting with a ban on the most commonly sold rifles and ammunition magazines in the country. The Biden/Harris plan also includes jacking up taxes on the sales of both firearms and ammunition, giving grant money to states that implement subjective gun licensing laws, and mandating “smart gun” technology for new firearms. Not only would the Biden/Harris anti-gun agenda turn the Second Amendment from a right into a privilege to be exercised by a chosen few, the anti-gun justices that Biden and Harris would place on the Supreme Court would undoubtably give the thumbs up to virtually every gun control law that comes before the Court.

SAVE OUR SECOND AMENDMENT. VOTE!

There’s a lot at stake in this year’s elections, but the Second Amendment is absolutely at risk if Joe Biden and Kamala Harris occupy the White House with Democrats in charge of Congress. While there might be a few Democrats who would object to the heavy-handed enforcement of the proposed gun laws by armed police officers, the financial largesse of gun control sugar daddy Michael Bloomberg, who’s spending hundreds of millions of dollars backing anti-gun lawmakers in local, state, and federal elections almost guarantees that, if in power, Democrats will move swiftly to approve sweeping gun control legislation that would have an impact on tens of millions of legal gun owners around the country.

I’m glad to see the president is feeling good enough to get back on social media, but frankly, the thought of a Biden/Harris administration should be enough to make every Second Amendment supporter feel sick to their stomach.