Pardoned By Chris Christie, But Still Fighting For His Dream Job

Longtime 2nd Amendment supporters may remember Steffon Josey-Davis, the New Jersey man arrested after he revealed during a traffic stop that he had accidentally left his legally owned firearm in his glove compartment. Despite the fact that there was no ill intent, prosecutors came after Steffon with felony charges, and he eventually pled guilty to reduced charges and received probation and a fine. Two years later, in 2015, then-Governor Chris Christie pardoned the young man, restoring his hope for a career in law enforcement.

Josey-Davis, 24, said he is already back on his quest to become a police officer.

“This is just opening up new doors for me,” said Josey-Davis. “I’d just love the chance to fulfill my dream.”

Evan Nappen, Josey-Davis’ attorney, welcomed Christie’s decision, saying his client “made an honest mistake that he’s explained pretty thoroughly. For him to become a felon and have his life and dreams ruined was just absolutely wrong.”

With his record expunged, Steffon achieved that dream by becoming a sworn police officer in the state of Maryland in 2018.

Mission complete. After being arrested in 2013 then being pardoned in 2015 by @ChrisChristie I am thankful to be apart of this #BLUELINE family. Thanks to those who help so much. @CamEdwards @NRA @FoxNews @foxandfrinds @DRUDGE_REPORT @BreitbartNews @AP @NJ2AS @njdotcom pic.twitter.com/r1Qw326GHu

With one goal achieved, Steffon now has another that he’s hoping to accomplish; being hired by his hometown police department.* Given the high scores he received on his civil service exam, Steffon should have been at the top of the hire list for the North Brunswick Police Department, but even after he was pardoned in 2015, the department continued to insist that because of his arrest and guilty plea there in Middlesex County, he wasn’t eligible for employment as a police officer in North Brunswick. Documents reviewed by Bearing Arms reveal the department informed Josey-Davis in 2016 that his name had been “removed from the North Brunswick Municipal Police Officer open competitive list due to an unsatisfactory background investigation” which revealed that Steffon had been “arrested and convicted of unlawful possession of a handgun”, and his name was removed from the list.

Given the fact that Steffon Josey-Davis’s record had been expunged, you might find it odd that the police department was able to use his conviction and ignore his pardon in order to tell him he wasn’t eligible to be hired. Unfortunately, in New Jersey, even after a pardon and expungement has taken place, an individual can still be removed from an eligible hire list if the government job they’re seeking is in law enforcement, corrections, fire fighting, or the judiciary. The only way to have your name restored is by petitioning the chair of the state’s Civil Service Commission, and that’s exactly what Steffon Josey-Davis is doing now. As he wrote in a letter to the state’s Director of the Attorney General’s Division on Civil Rights,

“For as long as I can remember, it has been a dream of mine to be a hometown hero, a protector of and a positive role model to the community in which I was cultivated. There appeared no better way to me than to serve that locality as a Law Enforcement Officer. Over the years, this has proven to be quite an evasive feat for all the wrong reasons.”

Josey-Davis also explained in that letter why he didn’t appeal the decision by the North Brunswick Police Department back in 2016.

After selling all of my most valued possessions and incurring massive amounts of debt to maintain my freedom, coping with the psychological devastation/trauma of possibly having to spend 10 years of my life in prison for a non-violent “crime” and dealing with the humiliation of being defined as a criminal based solely upon the agents’ acting on behalf of the New Jersey State Government’s lack of knowledge and ignorance of the law, I was elated to finally receive a glimmer of relief and hope from the justice system, regardless of the permanent damage dealt to my reputation, confidence, and finances.

The glimmer of hope came in the form of both the Pardon and the Appeal. With this second chance I was motivated more than ever before, and I was able to obtain one of the highest scores for the Civil Service Commission testing for Entry Level Law Enforcement. Despite this, the North Brunswick Police Department denied me for the 4th time on May 2nd, 2016 after being placed back on the list by then Director of the Civil Service Commission Division of Appeals Henry Maurer. They did so in the form of a Notice of Removal Letter, citing an Unsatisfactory Background Check, more specifically citing the Unlawful Possession of a Firearm conviction that had been expunged from my record.

The definitive reason as to why I did not file an additional appeal within the 20 day period is because I was exhausted! Mentally, physically and financially. Mentally due to the energy that went into studying to ensure I placed in the highest percentile (I placed 1st) and the trauma endured over the course of the previous year fighting my case. Physically due to the STRESS incurred from that same trauma stemming from the irreparable damage inflicted on my reputation, the debt I had incurred and the worry of not being able to provide for my family in ways I’ve always dreamed of. Financially due to the tens of thousands of dollars I spent fighting the inevitable conviction of a crime which was then found by the highest authority within the state of New Jersey to have not been a crime in the first place and the inability to be able to find a decent paying job! Overcoming all of that only to be failed by the system once more.

I was embarrassed and financially and emotionally depleted. While I felt that the handling of this entire process was unethical and unprofessional I had nothing left to give at that point and had run short on options as to how I could earn a living whilst continuing to give this energy. I went out of my way to fight to be back on the list for hire as a police officer. Paying 20 dollars to the State of New Jersey Civil Service Commission to appeal a decision to be placed on the list. Testing and placing 1st on the eligibility list with a score of 98.160, then being denied approx. 9 months later because of an unsatisfactory background check when I was assured by State of New Jersey Authorities that my record had been expunged? This followed by the ire of knowing that I would likely not be able to test again for another three years.. Only prolonging the pursuit of my dreams. I had no other option but to seek employment elsewhere.

Steffon Josey-Davis did find that employment in the state of Maryland. He’s a sworn law enforcement officer now. He’s proud to wear the badge, but that hasn’t killed his dream of returning to the town where he grew up and serving on the force.

I spoke to Steffon on the Friday edition of Bearing Arms‘ Cam & Co., where he told me he’s now ready to file a tort claim against the department in an attempt to be placed on the eligible-to-be-hired list. He’s also filed his appeal with the state’s Civil Service Commissioner, and is awaiting the decision. Unfortunately, given the fact that the commissioner is appointed by the governor (in this case, anti-gun governor Phil Murphy), I’m not confident that Steffon will receive a decision in his favor.

I’m rooting for Steffon. I’ve been covering his story since shortly after his arrest, and his perseverance and poise over the years has really impressed me. It would have been very easy to simply give up on his dream, but instead he’s pushed himself time and time again in order to achieve his goals. What a redemption story it would be for the jurisdiction that prosecuted him in 2013 to have him as a police officer, protecting and serving his hometown just a few short years later. Frankly, it be a much better story for North Brunswick Township and Middlesex County than what we have now; a young police officer who is being told that, no matter what he does with his life, it will never be enough to allow him to wear the badge of his hometown police department.

Check out my entire interview with Steffon Josey-Davis below, and we’ll keep following his story in the weeks to come.

*This story originally stated that North Brunswick Township was where Steffon Josey-Davis was arrested in 2013. The arrest took place in Highland Park, New Jersey, also in Middlesex County. The story has been updated with the accurate information. 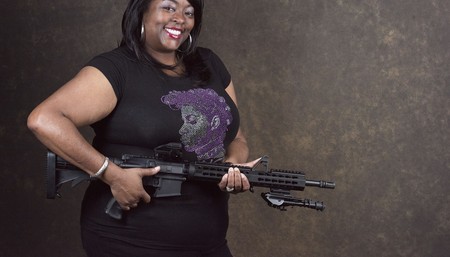