While Robert Francis “Beto” O’Rourke is no longer a presidential candidate, the centerpiece of his failed campaign is still alive in the policy proposals of other Democrats like Cory Booker, and gun owners are still looking at the most hostile group of presidential contenders ever assembled in U.S. history. While it might be reassuring to think that O’Rourke’s campaign tanked because of his call to ban and confiscate the most commonly sold rifle in the country today, the truth is that O’Rourke’s gun control agenda didn’t turn off large numbers of the Democrats’ base. Instead, as Politico notes, his campaign ultimately cratered because it didn’t do the basics.

While other candidates were assembling campaign staffs and volunteer armies in early nominating states, O’Rourke lacked the infrastructure necessary to organize his own supporters. Lawmakers and major Democratic donors could not get calls returned. When the campaign’s skeletal staff promised to reach out, it sometimes forgot.

The signs of disorder were startling. He announced his candidacy before hiring a campaign manager. Two senior officials who had worked on O’Rourke’s Senate run and on Sanders’ 2016 presidential campaign, Becky Bond and Zack Malitz, abruptly left. On the eve of his campaign announcement, O’Rourke was forced to personally apologize to at least one prominent Iowa Democrat for his lack of organization, according to a source familiar with the conversation.

As Politico notes, by the summer O’Rourke had managed to hire some veteran campaign staff and received a huge amount of free media when he re-launched his campaign to focus on gun control efforts like his proposed semi-auto ban and compensated confiscation scheme.

But it was too late. O’Rourke’s fundraising had fallen off almost immediately after he entered the race, and he never recovered. He performed poorly in the first primary debate, appearing shaken when a fellow Texan, Julián Castro, tore into him over his opposition to decriminalizing border crossings. O’Rourke disliked debates and preparing for them, and he felt after the encounter with Castro that he had been stilted and over-prepared, according to a source familiar with the campaign.

By Friday, an adviser said, O’Rourke was running out of money. The campaign explored the possibility of public financing, but abandoned the idea, a campaign adviser said. Layoffs, said Aleigha Cavalier, O’Rourke’s press secretary, “were never an option” O’Rourke considered.

So nobody was laid off. Instead, everyone was let go when the campaign closed down. I’m not sure there’s much of a distinction there, but then, the O’Rourke campaign was never really one to be too precise with its language. O’Rourke said that the government would be coming for people’s guns, but it wasn’t gun confiscation. O’Rourke championed “criminal justice reform” while promising gun control laws that would criminalize virtually every legal gun owner who refused to comply with his gun ban, gun licensing, gun registration, and other anti-gun policies.

I think O’Rourke made a mistake by making gun control the focal point of his campaign. It’s not that he was out of step with the base of the Democrat party. In fact, it’s the opposite. To gun owners, the idea of a compensated confiscation of millions of legally owned firearms is a clear infringement on the right to keep and bear arms. To the voters that O’Rourke was wooing, however, the confiscation scheme is just “common sense.”

Democrats voiced the strongest support for a mandatory buyback program at 82 percent, while 51 percent of independents said the same. Just 39 percent of Republicans agreed.

The sad fact is that every Democrat running for president believes that AR-15’s and other commonly owned semi-automatic firearms should be banned, and there are still candidates out there like Cory Booker who are calling for a mandatory “buyback” or compensated confiscation of firearms. While candidates like Elizabeth Warren, Joe Biden, and Pete Buttigieg may have poo-poohed the idea in favor of a ban on future production of AR-15’s and registration of existing firearms (which comes with its own set of issues), if they are elected next year none of them would veto a gun ban and confiscation scheme if it got to their desk. As anti-gun as Robert Francis “Beto” O’Rourke was, he still wasn’t anti-gun enough to stand out from the crowded field of Democrats.

I tried to tell him that he should go ahead and call for a full repeal of the Second Amendment if he wanted to stand out, but O’Rourke decided to pursue headlines with profanity instead of a pure prohibitionist policy. Don’t get me wrong; I certainly don’t agree with repealing the Second Amendment, but if you’re gonna base your entire campaign around gun control, you better go big or go home.

Beto’s going home, but the remaining candidates are every bit as hostile to the Second Amendment as he is. Some may pay lip service to the idea of that the right to keep and bear arms is a real right, but every candidate on stage at the next debate are pushing policies that would turn your rights into privileges. I wish that wasn’t the case, but unfortunately even without Robert Francis “Beto” O’Rourke in the race, the crop of Democrats running for president is as opposed to the Second Amendment as they are to Donald Trump. 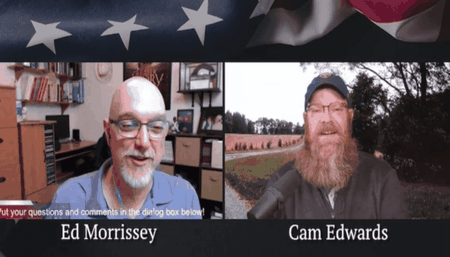