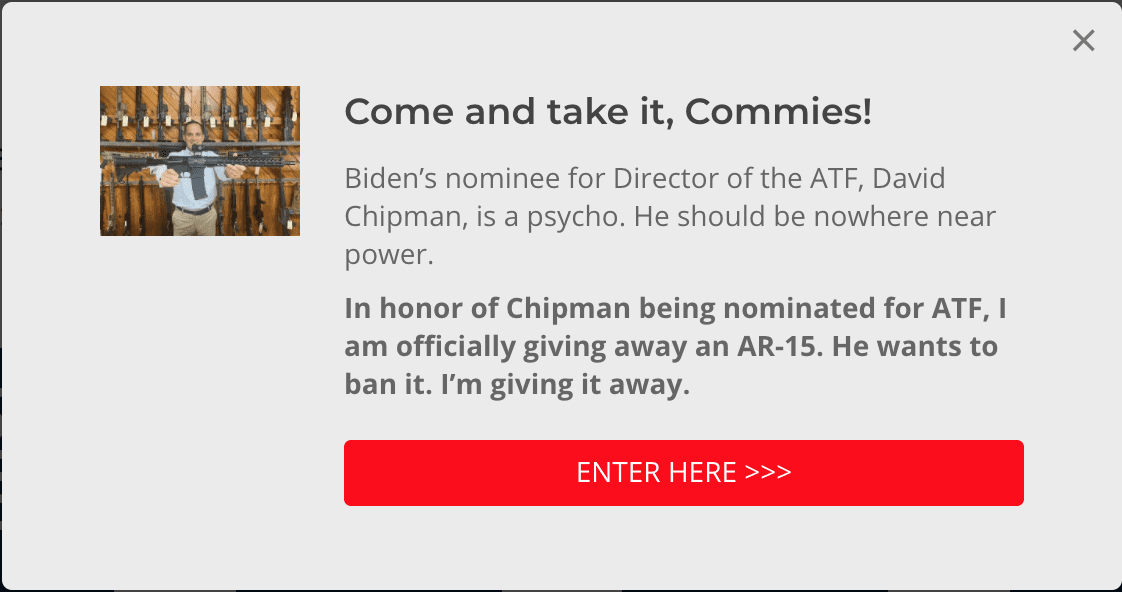 Now, plenty of candidates have offered similar raffles in the past, but Florida Politics columnist Jacob Ogles wonders if Sabatini’s raffle violates state law, given Florida’s current ban on gun sales to those under the age of 21.

Still, the Federal Elections Commission said there’s not a major problem with raffles. It isn’t uncommon for campaigns to sell merchandise or tie donations to a chance to go on a trip with a candidate. “As far as raffles, there’s nothing in FEC rules that prohibits it,” said Miles Martin, a spokesperson for the FEC.

That said, there are other laws at play when it comes to firearms transactions in the state of Florida. Thanks to a law signed by former Gov. Rick Scott in the wake of the Parkland school shooting, gun purchases in Florida must be made by individuals 21 and older.

But the Sabatini raffle allows anyone 18 and older to enter.

That may because the rules seem to simply lift template rules to comply with raffles. That incidentally includes making tickets available even without a purchase of a ticket or donation to the campaign, an option often made available so contests don’t run afoul of gambling prohibitions. Contests often also are limited to adults.

Of note, the prize can be won by anyone living in the U.S. or Puerto Rico, so Florida law doesn’t necessary impact the winner. But there are no guardrails seemingly stopping someone from entering the raffle.

All federal, state, and local laws and regulations regarding the eligibility of entrants apply. Void where prohibited by law. The Promotion is open to citizens and permanent residents (green card holders) of the United States who are legal residents of one of the fifty states, Puerto Rico, or the District of Columbia and are at least 18 years of age or the age of majority as determined by state law.

In addition, the rules state that “in the event the selected Winner fails to respond within the given time period or is ineligible to accept the Prize, another winner will be selected.” So yes, to answer Ogles question, Sabatini’s rifle raffle is in line with Florida’s law. It should also be noted that Florida’s ban on gun sales to under-21s is currently the subject of a legal challenge, and the Fourth Circuit recently declared that such a ban is flat out unconstitutional.

Ogles’s reporting sounds like he was trying to some raise red flags about Sabatini’s rifle giveaway, but the only thing he really accomplished was to give it more publicity. I hadn’t heard about the rifle raffle until I read Ogles’ column but thanks to his story, I’m sure plenty of Second Amendment supporters in Florida (and around the country, for that matter) will be entering the raffle for their chance to win an AR-15.