Of course, they were calling for the same gun control laws when the nation’s homicide rate was steadily declining for years, but they’d prefer you not remember that. With the FBI reporting the biggest one-year spike in homicides since they started keeping track, and since that spike coincides with the biggest one-year increase in gun sales since the start of the NICS system two decades ago, the editors at the Washington Post know that it’s easy, however dishonest, to equate correlation with causation.

The FBI’s annual tabulation of crime data, released on Monday, showed that killings in the United States increased nearly 30 percent last year, the largest annual increase on record. An additional 4,901 people were killed in 2020 compared with 2019, bringing the total to 21,500.Many factors are at play — including an unprecedented pandemic that caused economic and mental stress — but what is most striking is the undeniable role played by guns. Gun homicides accounted for more than two of every three killings; few parts of the country have been spared. In 1990, crime analyst Jeff Asher told the New York Times, New York City and Los Angeles accounted for 13.8 percent of U.S. murders, compared with only 3.8 percent in 2020; a Post analysis of shootings in the first five months of this year found an increase in shooting deaths in suburban and rural areas with experts noting a dramatic increase in gun purchases.

Actually, research has shown that the rise in homicides and shootings cannot be attributed to an increase in gun sales, but the Post‘s editors have no reason to point that out to their readers since it completely undercuts their argument. It’s true that it’s not just New York and Los Angeles experiencing a crime surge, but even the paper’s own data shows that, despite the protests by the editors, big cities have seen a much larger increase than the suburbs and rural areas. 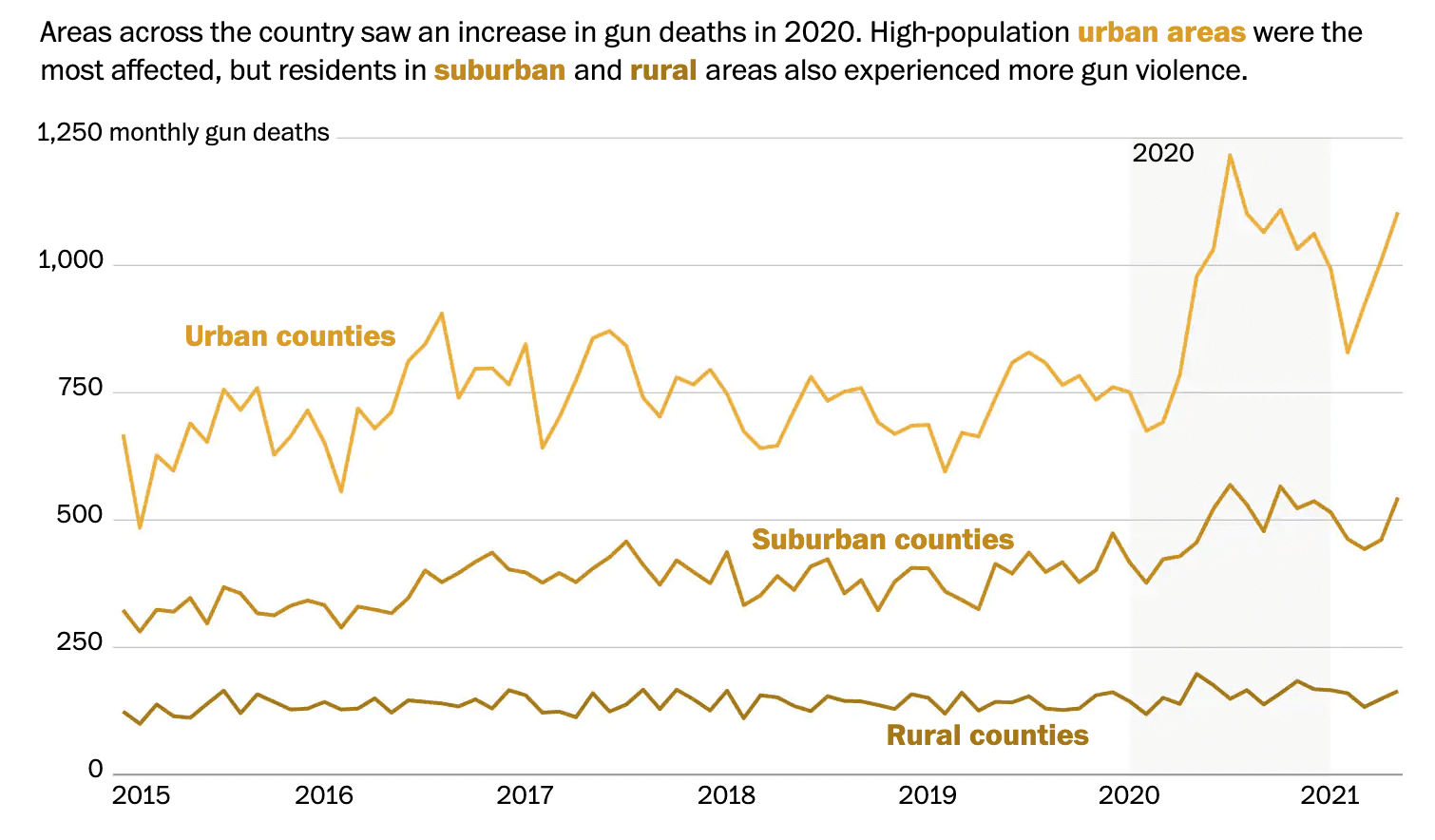 In fact, rural areas, where gun ownership is most common, had an almost imperceptible rise in “gun deaths” since the surge in violent crime began last summer. If guns were the problem, wouldn’t the problem be most acute in the places with most guns?

Apparently that obvious question never crossed the minds of the WaPo editors, who instead repeat their stale demands for more restrictions on the right to keep and bear arms while never once mentioning the individuals who are actually responsible for the increase shootings and murders.

Instead of putting in place sensible gun control — such as bans on assault weapons, universal background checks, safe secure laws with stiff consequences — Congress has remained gridlocked. Meanwhile, Republican-led states have enacted laws — such as the one that went into effect in July in Tennessee that allows most adults to carry, openly or concealed, a handgun without a permit. The rising and spreading murder statistics should raise the alarm that it’s time to stop despairing over the damage done by guns and do something about it.

The Washington Post‘s idea of doing something is creating new crimes out of the right to keep and bear arms. I’ve got a better idea: let’s actually focus on the guys who are committing these violent crimes rather than turn millions of legal gun owners into non-violent offenders. That not only means violence prevention efforts, but improving clearance rates for homicides and non-fatal shootings. A big reason why crime is up right now is because more offenders are getting away with it. In Chicago and many other cities the clearance rate for non-fatal shootings is less than 20%, and in some cases it’s even lower.

And once arrests are made we need to ensure that there are actual consequences, not a slap on the wrist and a couple of years of probation. We need to also have a serious conversation about juvenile justice, given that we’re seeing a growing number of young offenders committing some heinous crimes, and in many cases they’re already well known to the court system. The purpose of juvenile justice is supposedly rehabilitation, and in many states the system is failing miserably.

We should be doing more to address violent crime, but that doesn’t mean going after the right to keep and bear arms; a right, by the way, that millions of Americans have embraced for the first time in their lives over the past couple of years. These new gun owners are not the drivers of “gun violence,” but in the myopic eyes of the Washington Post editors, they and other responsible gun owners are clearly the biggest menace to society.