One of the gun control lobby’s most common tropes is the claim that the vast majority of Americans agree with their agenda, but their “commonsense” policy ideas are constantly thwarted by those awful Republicans who are in the pocket of the NRA. Nevermind the fact that even with Democrats in control of the House and Senate, gun control is going nowhere. Forget that Maine Senator Angus King, who caucuses with Democrats, is the main reason why gun control activist David Chipman isn’t running the ATF right now. Pay no attention to prior voting results that conclusively demonstrated that things like universal background checks aren’t broadly popular at all, at least when people actually cast a vote on the issue.

Nope, we’re just supposed to take anti-gun activists at their word that they’ve got the vast majority of Americans on their side. Well, if all the evidence listed above doesn’t persuade you otherwise, take a look at this brand new Morning Consult/POLITICO poll, because it’s absolutely devastating to gun ban fans.

Morning Consult asked voters who they trusted more on a number of issues, including “gun policy”, and while Democrats still lead Republicans on issues like the environment, climate change, and the coronavirus, it’s the GOP that has the upper hand when it comes to firearms. 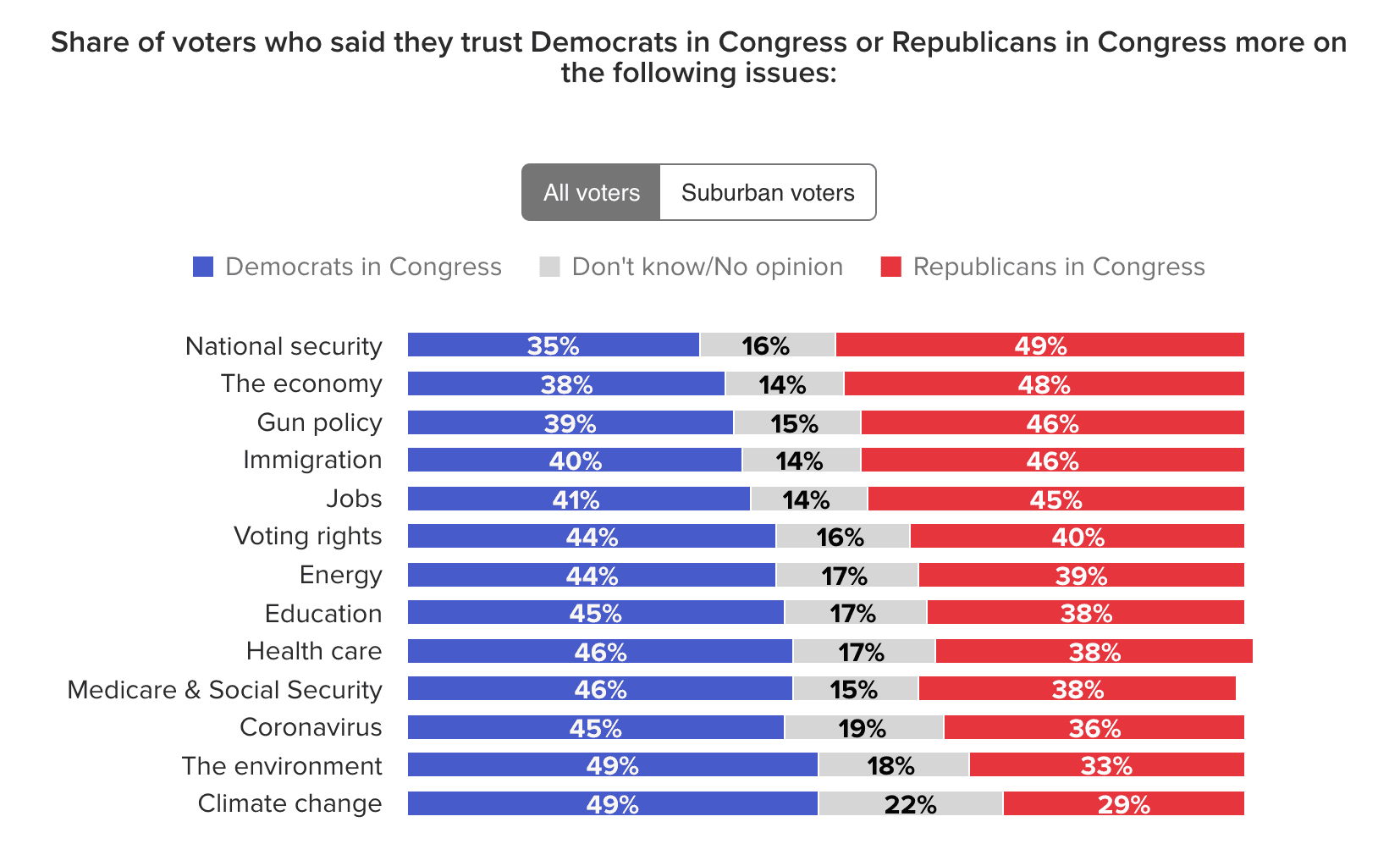 In fact, Republicans lead Democrats by seven points according to the new poll, which is outside the margin of error. And this isn’t just a matter of oversampling rural voters, either. For much of the past decade, the gun control lobby has spent hundreds of millions of dollars wooing suburban voters, particularly women, and the strategy has been been moderately successful over the past couple of election cycles. If this poll is anywhere close to being accurate, however, those days are gone. Check out how suburban voters in particular feel about the Republican and Democratic agendas when it comes to guns.

That’s right, Republicans actually have an even more impressive 10-point lead over Democrats among suburban voters on gun issues. Again, if this poll is close to being an accurate representation of where the suburbs stand a year away from the midterm elections, Democrats should be hitting the panic button and should stop returning calls from Everytown for Gun Safety, Giffords, and the rest.

Of course, we know that’s not going to happen. The deep pockets of anti-gun billionaires like Michael Bloomberg are too important to shy away from backing more restrictions on the right to keep and bear arms, even if more voters are looking for candidates who’ll protect those rights instead.

Democrats may want to avoid making gun control a big part of their 2022 campaigns, but I don’t think circumstances are going to allow them to do that, frankly. The Supreme Court will issue its decision in New York State Rifle & Pistol Association v. Bruen sometime next summer, and if the Court does end up overturning New York’s “may issue” carry permitting scheme, blue-state Democrats are going to be forced to respond. Most of us suspect that states like New York, California, New Jersey, and other “may issue” states that might be directly impacted by the Court’s decision will try to revise their standards to comply with the letter of the Court’s opinion while still doing everything they can to block the average citizen from lawfully bearing arms in self-defense in public.

These poll numbers indicate that would be a very bad idea, but Democrats are too wedded to the gun control lobby to suddenly distance themselves, no matter how unpopular their ideas are with the public at large. Nancy Pelosi herself could announce that she’s the proud owner of a new AR-15 and I don’t think that would sway most voters, who are well aware that Democrats have been touting themselves as the party of gun control for quite some time.

The other problem for Democrats, of course, is that their base is still really interested in the idea of passing Joe Biden’s gun and magazine ban (along with a host of other infringements on the right to keep and bear arms). Try to woo the suburban moms who bought a gun for the first time last summer and they risk angering stalwart Democrats in big blue cities. Appease the urban vote, which is far more supportive of new gun laws, and they’ll drive some of those suburban voters into the arms of the Republicans.

A lot can happen between now and next November, but when it comes to gun policy I’d argue the fundamentals are in Republicans’ favor. And if I were a Democrat up for re-election next year, I’d be calling the White House and demanding they put a halt to Joe Biden’s anti-gun executive actions before they give voters even more reasons to reject the party’s gun control agenda.