The gun control lobby and its supporters are insistent that they’re not opposed to gun ownership or the Second Amendment. Instead, they claim that their only objection is to irresponsible and illegal possession of a firearm. So why were so many gun control supporters hyperventilating over this tweet from a sheriff’s department in Colorado showing a responsible, upstanding citizen applying for his concealed carry license?

Guess who came in to receive his Concealed Handgun Permit today? 🎅

Did you know the El Paso County Sheriff's Office has issued 49,750 Concealed Handgun Permits with another 2,560 awaiting to be issued?

The most obvious explanation is that, contrary to their oft-repeated claims, it’s not “gun safety” that these people really want. It’s an end to gun ownership outright.

And so what was meant to be a light-hearted tweet on the part of the El Paso County Sheriff’s Office turned into yet another opportunity for the online rage mob to vent its collective spleen at the sight of old St. Nick getting his carry license.

Social media users were quick to lash out, slamming the idea that Father Christmas would want a concealed carry permit as his own holiday present.

“So the dude coming through the Chimney to give presents to your kids will be carrying a concealed handgun? Got it!” responded user Russel Schwartz.

“Santa has a fvcking gun is what you’re going with? Should I show my child this pic? Will it comfort them? Will they love Santa more? Who is this tweet for?” said one outraged user, who went by Jane Austen.

“Posting this tells me your professional judgment is impaired,” another user declared. “What is your message to children here? Santa has a legally concealed weapon? For protection against elves, reindeer, children who take a peek on Xmas eve? There is enough anxiety among children already.”

Another criticized the tweet’s poor timing in wake of the deadly school shooting in Michigan that left four students dead this week.

“I’m sitting here in downtown Oxford, MI, waiting for the candlelight vigil to start to pay tribute to 4 students who were murdered by a handgun smuggled into the school. But by all means, tell kids Santa carries a concealed weapon,” Joseph Johnson tweeted.

First off, if your kid is on Twitter, I guarantee that a picture of Santa applying for his concealed carry license isn’t the worst thing they’ve seen on social media.

Secondly, have none of these people heard of the fantastically over-the-top movie Fatman come out last year featuring Santa as a gun owner forced to defend himself against a contract killer hired by a kid who got coal in his stocking? Want to know why jolly old St. Nick needs self-protection? There you go.

Personally, I’d rather see Santa taking steps to lawfully carry a firearm in self-defense than, say, carrying an axe to chop up bad little boys and girls or even hawking his favorite brand of soda, but whatever. I just have a hard time taking these complaints seriously. The outrage seems more performative than anything else.

For its part, the El Paso County Sheriff’s Office hasn’t apologized for the tweet, though it did subsequently post an explanation stating, “EPSO intended to highlight our staff in the Concealed Handgun Permit Office, not to be insensitive. Santa correlates to the month of December and we thought he would help to recognize our hard working staff.”

The most important takeaway from this isn’t that online outrage mobs will fire up their digital torches over the slightest perceived wrong. We’ve known that for years now. It’s the fact that there are almost 50,000 active concealed carry holders in El Paso County, which is about 10% of the adult population in the county. It’s also far more than the number of folks venting their spleen about the photo of Santa applying for his own carry license, most of whom weren’t even local residents. The online rage mob can be loud and obnoxious, but the only power they have is the power we choose to give them, and I’m glad that (at least as of now) the sheriff’s office isn’t backing down or bending a knee to those who’d prefer not only Santa, but the rest of us, be disarmed and deprived of our right to armed self-defense. 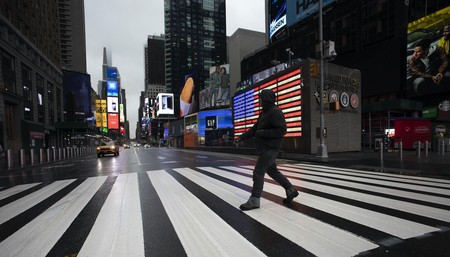 The NYC Second Amendment infringement case you're not hearing about
Jan 26, 2022 3:30 PM ET