If Mobile County, Alabama Sheriff Sam Cochran doesn’t win re-election next year, he’s setting himself up nicely for a future role as a senior advisor to a gun control outfit.

Rep. Shane Stringer wasn’t successful at getting Constitutional Carry turned into law this year, but he’s vowing to bring the bill back next year and Cochran’s been busy trying to drum up opposition. He’s asked the Mobile County Commission to pass a resolution opposing Constitutional Carry, and more recently used the department’s Facebook page to rally opponents to his side in perhaps the dumbest way possible. 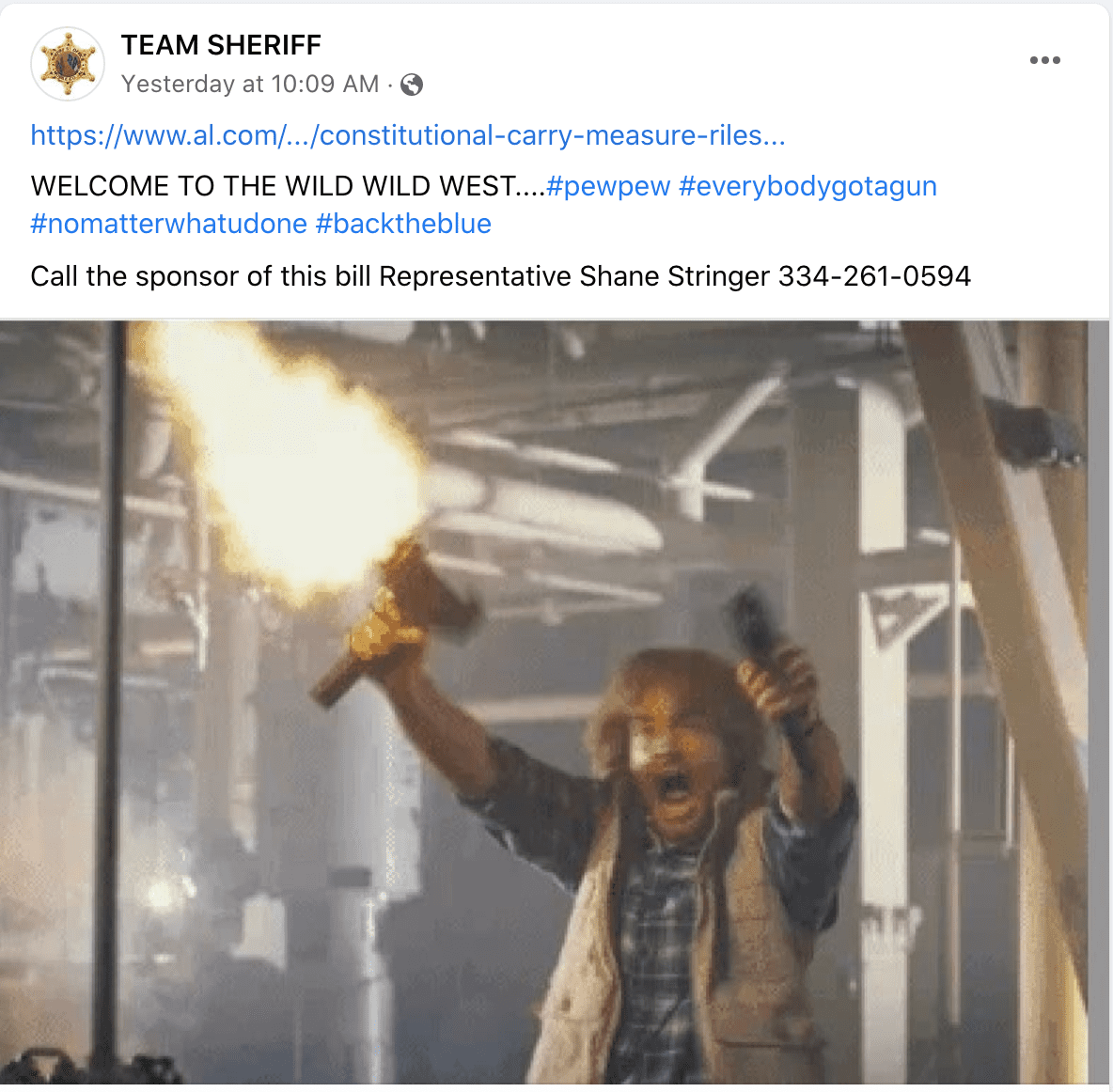 In Second Amendment-friendly Alabama, you can imagine how well that went over.

To be fair, the post did get some feedback in support of the Sheriff’s office. But –and maybe this shouldn’t have come as a surprise — it was the fans of unfettered firearm access who opened fire with fervor.

“I live in Florida, but support y’all. Have a Merry Christmas and be safe!!!”

“We need permits period!!!!!! Grant it, there are mannnny who do not want this. I know there are mannny that do not need a gun at all, and I do know those who do not deserve or need one because of their criminal activity that they are involved in they end up retrieving guns off the streets. However, we need laws and they have to be upheld. Just my opinion so please don’t attack me on it. Merry Christmas.”

“Thanks for the link. I’ll share it with all to gain more support for the bill. Cochran and [County Commissioner Randall] Dueitt have remarks in the article that truly show how out of touch they are with reality. They’d be great additions to Brandon’s administration. Really, thanks.”

“Respecting the 2nd amendment is the wild west? Ok comrade.”

“Thanks for the reminder! We have been in touch with Representative Stringer and we thank him for his efforts on this bill. He is working to protect the rights of Americans as well as the funding for the Sheriff’s office.”

“I predict that this post might suddenly disappear, out of embarrassment. I know I would delete it, if I had posted this BS, but hey, that’s just me. Somehow, I like to hold onto my own dignity and integrity. Maybe those attributes, mixed with honesty and facts means something to me?

When Cochran’s post started getting some attention, the “Team Sheriff” account also decided to make it clear that unless you live in Alabama, #yovoicedontcount.

I think what the sheriff really means is that your voice counts if you choose to live in Mobile County and you agree with him that Constitutional Carry would be a mistake.

Unfortunately for the Cochran, the vast majority of replies to the Facebook post are calling him out for his objections to Constitutional Carry, which range from “we need to vet who’s carrying guns” to “the department is going to lose a lot of money if we’re not getting permitting fees”.

The money issue is a genuine concern, though I don’t think it’s fair or just for gun owners to be singled out as a revenue source for any law enforcement agency. Public safety is a concern of the public at large, and should be funded by the general public and not any specific subset. Republican lawmakers like Stringer, however, are actually looking at ways to replace the permitting funds so that police agencies aren’t “defunded” as a result of the state dropping its mandate that legal gun owners obtain a state-issued permit before they can carry concealed.

As for the idea that police need to give the thumbs up to all those carrying, that’s not happening right now. Plenty of violent criminals are illegally carrying firearms, and it will be just as illegal for them to do so under Constitutional Carry as it is right now.

I suppose we should offer congrats to Sheriff Cochran for going viral, as well as thanking him for helping to get the word out about the push for Constitutional Carry. I know he was really hoping that his post would light a fire under gun control activists, but it seems to have done a lot more to fire up the pro-2A crowd in Alabama and beyond.