Why "getting guns off the street" doesn't stop crime

It’s a tale of two headlines on today’s Bearing Arms’ Cam & Co, both focused on the idea of “getting guns off the street,” but offering up diametrically opposing viewpoints.

In one corner, the “ban-and-arrest-our-way-to-safety” mentality is on full display in this story from WBAL-TV titled “Gun seizures is first step in crime fight in Baltimore, expert says.”

Baltimore police said it is continuing its efforts to crack down on violence in the city. Most recently, the department said officers recovered a number of guns and made several arrests last week. Baltimore City leaders have said in the past that this has a direct effect on public safety.

A “direct effect on public safety.” Oh really? Not according to a new report by the group Battleground Baltimore, which took a look at gun seizure records and other crime data going back to 1990 and concluded “30 years of gun seizures in Baltimore haven’t kept the city safe.”

A close look at the data reveals what more and more people working in the criminal legal system across the country have argued: Seizing “illegal” guns does not reduce violent crime, although gun seizures and gun possession arrests remain metrics frequently cited by police (and praised as a prime example of “proactive policing”).

… Former Baltimore Police Commissioner Frederick Bealefeld told me in 2018 that he began to realize that seizing guns was a bit like fighting the drug war. It felt “endless,” he explained.

“In Baltimore, at the peak of when we were seizing guns—when we were really effective going after guns and trying to get guns off the street—Baltimore PD would take in about 2,500 to 3,000 guns,” Bealefeld said. “Every year in the state of Maryland—every year—30,000 brand-new guns were being sold. We would seize 4,000 and high-five and claim victory and have photographs. But we can’t even keep up with the flow they sold that year.”

It’s important to note here that Bealefeld isn’t what you or I would consider a Second Amendment supporter. When he was commissioner of the Baltimore Police Department, he called for bans on so-called assault weapons and “high capacity” magazines, as well as mandatory gun registration and allowing “licensed medical professionals” to have access to that registration information in order to determine “the danger of harm by their mental health patients.”

But Bealefeld at least paid lip service to the idea of focusing on the most violent offenders rather than simply padding the department statistics by stopping, frisking, and arresting anyone found with a firearm. And as Battleground Baltimore discovered, there’s simply no correlation between the number of gun seizures in any given year in Baltimore and the city’s homicide rate. 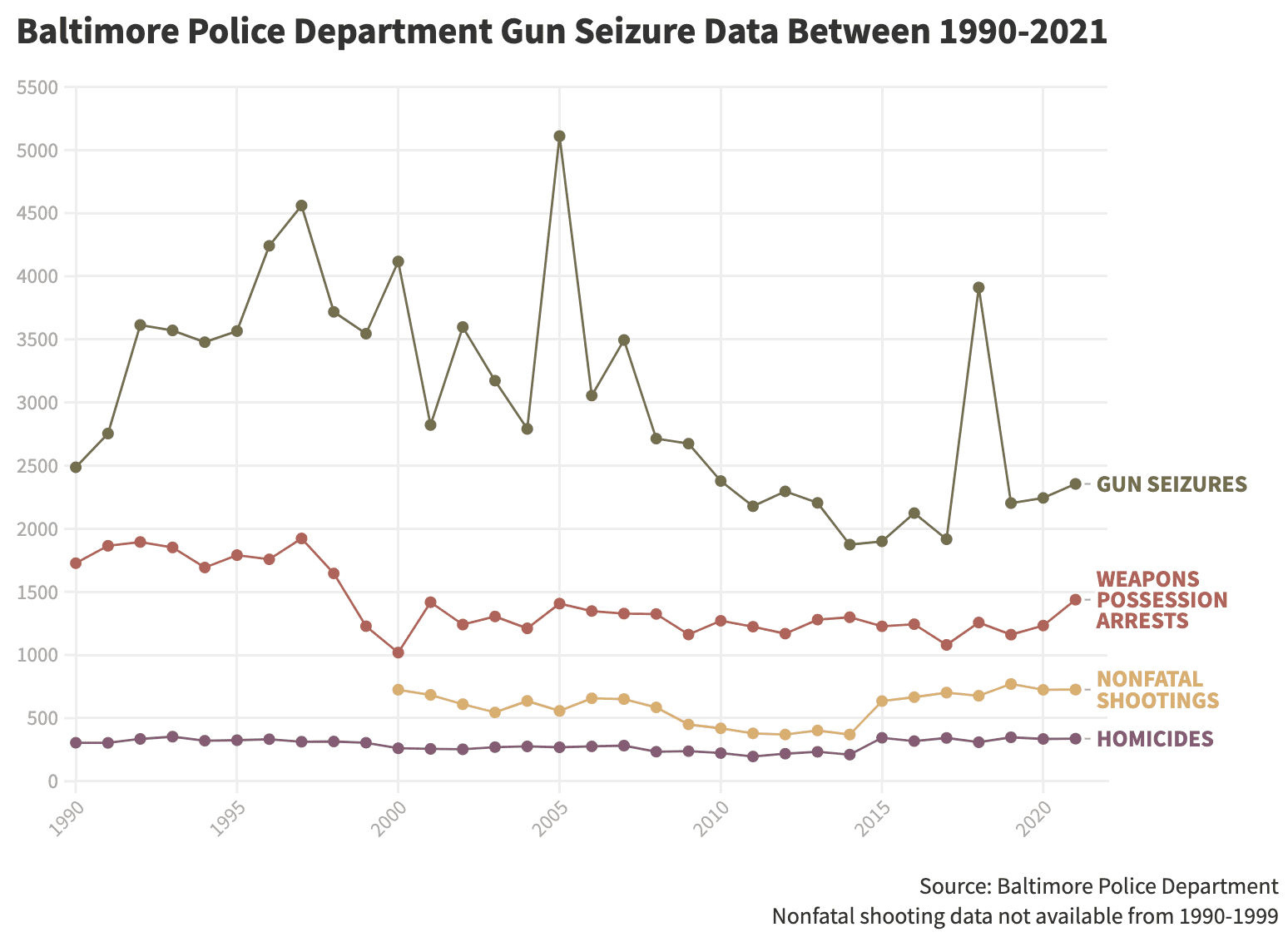 Given the fact that a relative handful of people are driving a majority of violent crime in any given city, it stands to reason that simply arresting and prosecuting anyone found with a gun isn’t going to have the same kind of effect that focusing on the most prolific and violent offenders can have.

Some “progressive” prosecutors like Philadelphia’s Larry Krasner have been willing to admit that prosecuting thousand of people a year for simply carrying a gun without a license isn’t the best way to fight crime, but far too many of them take that same hands-off, root causes approach to dealing with violent criminals as well. And even when guys like Krasner look to minimize arrests and prosecutions for mere possessory offenses, their anti-gun attitudes help to ensure that it remains difficult, if not impossible, for the average citizen to lawfully carry a firearm to protect themselves in many Democratic-controlled cities.

The answer here isn’t to defund the police or to just give more money to law enforcement to lock up anyone carrying a gun without a permit. The smart, effective, practical, and constitutional strategy is to decriminalize our right to keep and bear arms while delivering swift and certain consequences for those who misuse a gun in an act of criminal violence. A “getting guns off the street” strategy may give politicians a positive headline or two, but it doesn’t make life any safer for the good people trying to survive in some of our worst neighborhoods. It simply strips them of their most fundamental civil rights while offering up the empty promise of safety and security.

Minneapolis reeling in aftermath of "defund the police"
Sep 29, 2022