The polling outfit Morning Consult does its best to put a positive spin on the bad news for gun control fans by headlining their write-up about their latest survey “Most Voters Back Stricter Gun Control Measures After Buffalo,” but the real story is that support for new gun control laws is actually declining compared to most surveys conducted by the company over the last eight years.

The latest survey, which polled 2,000 registered voters and asked them whether or not they support or oppose “stricter gun laws”, found 60% of respondents answering in the affirmative, with 32% opposed and another 7% undecided or unresponsive. As you can see in the chart below, however, the survey shows that fewer Americans are supportive of more gun control laws compared to just a few years ago. 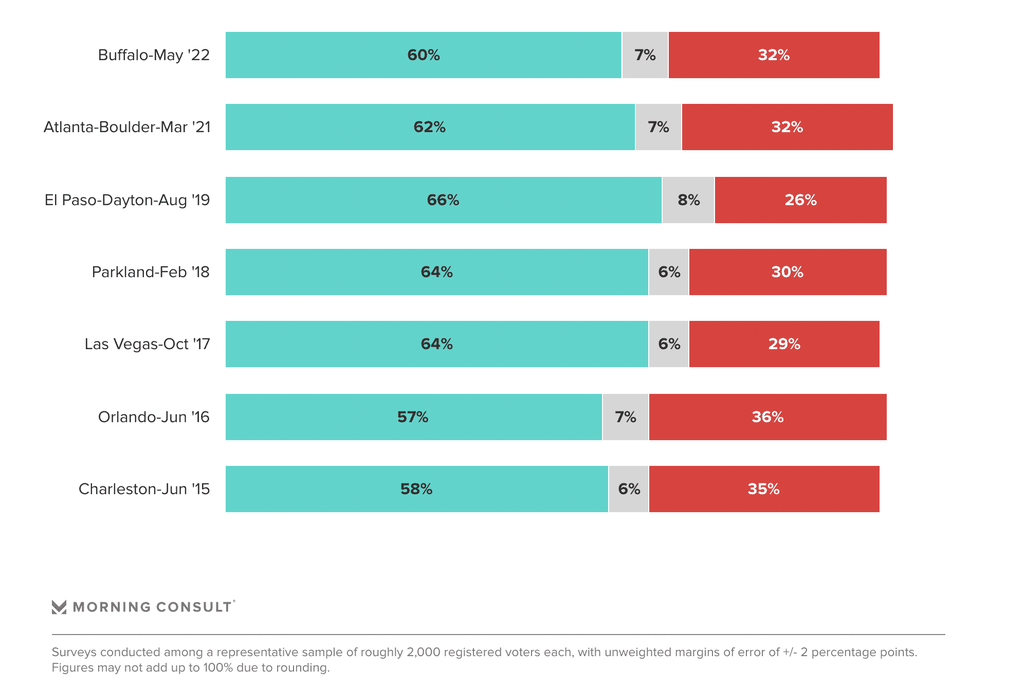 The declining popularity of gun control might explain why Democrats on Capitol Hill aren’t pushing for Senate Majority Leader Chuck Schumer to hold a vote on universal background checks and Joe Biden’s gun ban plan after the Buffalo shooting. It’s not just a matter of them knowing the voters aren’t there; Schumer refused to back off on a vote legalizing abortion at the federal level even though he knew it wouldn’t come close to attracting 60 votes, after all. But if Democrats don’t see gun control as a winning issue among voters they’re less likely to make it a top political priority… at least in the immediate future.

It’s not just a matter of one poll, either. As Dr. John Lott of the Crime Prevention Research Center recently noted in a piece dealing with public perceptions and misinformation about violent crime, even most Americans who falsely believe that most violent crime involves a gun don’t have much confidence that more gun control laws would make a difference.

The new McLaughlin & Associates survey of 1,000 likely voters from April 20 to 26 for the Crime Prevention Research Center shows how misinformed people are. People across the country, of all races and incomes, have wildly inaccurate beliefs about how frequently violent crime involves guns.

Some respondents at least got it right that less than 20% of violent crime involves guns. Just 8% prioritized more gun laws, and 15% focused on stricter enforcement of existing laws. An overwhelming 71% thought the best way of fighting crime was to arrest violent criminals.

Some likely voters thought that more than 80% of the violent crime involved guns. Most supported either more gun control laws (33%) or more strict enforcement of current gun laws (28%). Only 36% of them wanted the focus on arresting violent criminals.

The more misinformed you are about how frequently firearms are used in violent crime, the more likely you are to support new gun control laws. That finding doesn’t surprise me, though again, it’s worth noting that even among those Americans who wildly overestimate the use of firearms in violent crimes, two-thirds of them don’t believe that more gun control laws are the best way to fight violent crime.

Now, these surveys won’t stop Joe Biden from renewing his call to ban the most commonly-sold rifle in the United States, and we’ll soon see blue state legislators use the murders in Buffalo to advance their own anti-gun measures as well. Still, it appears to me that there’s a growing recognition among Americans that criminalizing the right to keep and bear arms is no way to ensure public safety, and that the focus should be on violent criminals, not law-abiding gun owners.