I’ve done a lot of media over the past couple of weeks talking about the Senate’s response to the mass murders in Buffalo, New York and Uvalde, Texas, and one of the questions that inevitably comes up is “what do Republicans get out of this?” The deal doesn’t include any sort of sweeteners for gun owners, after all; no removing suppressors from the National Firearms Act, no national right to carry reciprocity, nothing that any 2A organization could point to and call a win.

My answer all along has been that politics, not policy, is what’s really behind the Senate gun deal. Republican negotiators may have wanted to water down the Democratic gun control proposals (and succeeded in doing so, to be honest), but they weren’t pushing for the inclusion of any actual pro-2A amendments because that wasn’t what this deal was all about. It’s about telling voters, particularly those in the muddled middle, that they “took action” to protect students in school and to reduce mass shootings at a time when support for new restrictions on the right to keep and bear arms is ramping up among the electorate. Yes, we’re looking at a red wave election, but with crime and “gun violence” now one of the top concerns of voters (albeit behind the economy and inflation), guys like Senate Minority Leader Mitch McConnell don’t want to give voters any reason to hold their nose and vote for the Democrat on the ballot this November.

There’s one group of voters in particular that McConnell is targeting with the Senate gun deal: suburbanites.

“It is no secret that we have lost ground in suburban areas,” McConnell said. “We pretty much own rural and small town America, and I think this is a sensible solution to the problem before us, which is school safety and mental health and, yes, I hope it will be viewed favorably by voters in the suburbs we need to regain in order to hopefully be a majority next year.”

Gun owners and Second Amendment advocates are a big part of the Republican base, but we’re not only ones that the GOP is courting this fall, and McConnell has made the political calculation that the Senate gun deal will win Republicans more suburban votes than it will cost them in rural counties like my own. I’m not convinced that bet is going to pay off, but with polling outfits like Gallup reporting that “the latest support for tougher gun laws exceeds readings in the immediate aftermath of massacres in 2017 at a Las Vegas concert and in 2012 at Sandy Hook Elementary School in Newtown, Connecticut,” I can also understand why a politician like McConnell would be concerned that blocking any action supposedly aimed at reducing mass shootings wouldn’t sit well with independent voters.. and even some Republicans. 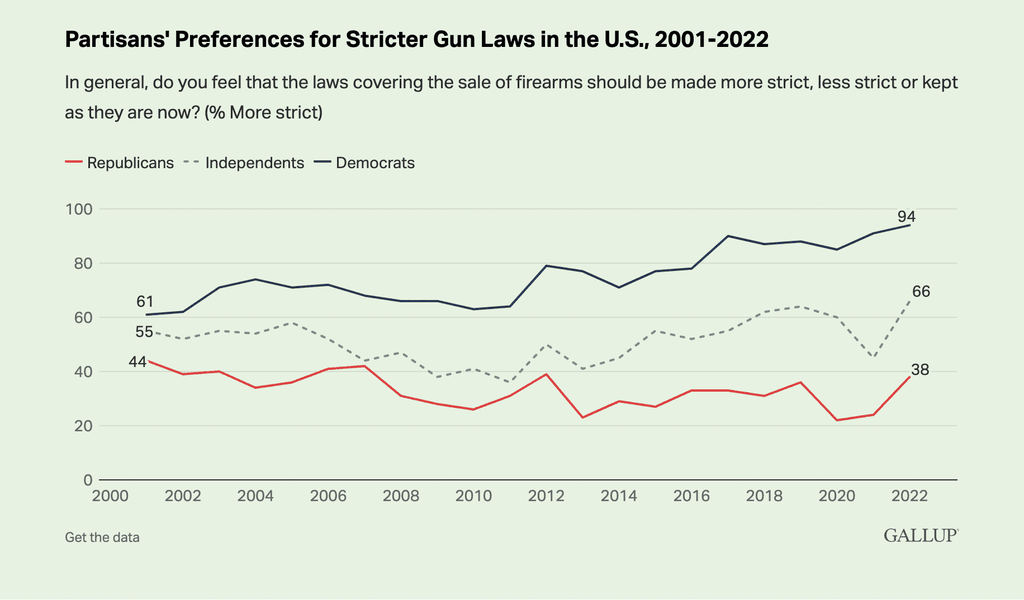 Support for new gun laws among Republicans right now is still six points less than it was 20 years ago, but there’s been a noticeable increase since Gallup last posed the question to survey respondents in 2021. It’s that dotted line in the middle that McConnell and company are really worried about however, especially with Gallup finding that 48% of voters say “gun policy” is “extremely important” to their vote this fall.
Well, McConnell got his wish, and now Republicans can argue they listened to voters and responded to their demands, though that’s not going to stop Democrats from continuing to portray the GOP as a bunch of slackjawed mouthbreathers who care more about their guns than innocent school children.
Speaking of polls, however, I’d be remiss if I didn’t mention this one, because I suspect it largely mirrors what McConnell and other Senate Republicans backing the deal have been hearing from constituents and their own internal surveys.

More than two-thirds of Texas Republican voters approve of Sen. John Cornyn’s (R-Texas) job performance, according to a poll released on Thursday, despite heat he has received from former President Trump and others over his involvement in crafting bipartisan gun safety legislation.

The new Morning Consult survey, conducted June 11-20, found that 68 percent of registered Republican voters in the state approved of Cornyn’s job performance, the same percentage he received when respondents were last polled between May 14 and May 23.

A slightly higher percentage of Texas Republican voters have said they disapprove of the job Cornyn is doing, however — 17 percent give the senator a thumbs down in the latest poll, compared to 11 percent in May.

Cornyn was booed at the Texas GOP convention, but that animosity apparently isn’t shared by many of the less activist and more rank-and-file Republican voters. If Cornyn’s popularity among Texas Republicans isn’t taking a hit after leading the GOP side of the negotiations on the gun deal, McConnell can feel pretty confident that the same is true for the GOP writ large.

Is McConnell taking 2A voters for granted? Absolutely. Am I happy about it? Not at all. Just because I understand his motivations doesn’t mean I agree with them, but then, I’m a Second Amendment advocate, not a partisan politician trying to regain a majority in the Senate with what could be a pretty weak field in some races.
I look at the poll numbers above and think “man, we need to do a much better job of educating non-gun owners about the importance of the Constitution and how these gun control laws work in practice,” but most politicians aren’t nearly as interested in educating voters as they are responding to them, especially with Election Day a little more than four months away. They don’t want to tell voters why they’re wrong, they want to tell them “here’s why you should vote for us.”
For 2A voters, the Republican message is “we kept your Second Amendment rights secure”. For everyone else it’s “we took substantive action to protect our schools and our communities from mass murderers.” It remains to be seen how well those messages will be received by their intended audiences, but the motivation behind the messaging is clear enough, especially after McConnell’s remarks to CNN.
Share
Tweet
Tags: GUN CONTROL VIDEO GUN OWNERS MITCH MCCONNELL GUN VOTE 2022 ELECTIONS