After originally backing away from his full-throated support for gun confiscation in the early days of his gubernatorial campaign, Robert Francis “Beto” O’Rourke has once again leaned in to the idea of a ban on AR-15s and other modern sporting rifles, or at least raising the age to purchase one from 18 to 21. The Texas Democrat has been intent on politicizing the murders at Robb Elementary in Uvalde in the hopes of boosting his candidacy, but a new poll of Texas voters finds that, while majorities are in favor of a special legislative session to address “mass shootings,” that isn’t translating into increased support for O’Rourke himself.

According to a new poll from The Dallas Morning News and the University of Texas at Tyler, Abbott has a 7-point cushion over O’Rourke, unchanged from a similar survey in May.

The poll, conducted Aug. 1-7, surveyed 1,384 registered voters and has a margin of error of plus or minus 2.8 percentage points.

Powering the governor’s lead is his handling of the Texas economy, with 53% favoring his stewardship and 41% who disapprove. Only 9% blamed Abbott or Texas lawmakers for inflation, while 48% blamed higher costs for goods and services on President Joe Biden.

“Regardless of the many things that are happening, Abbott’s standing and trust in the economy is what’s holding that lead,” said Mark Owens, a political scientist at UT-Tyler and director of the poll.
But all is not rosy for Abbott, particularly when it comes to gun control, with 66% of voters saying the two-time incumbent should call a special session on curbing mass shootings.
Could the gun issue be Abbott’s albatross?

Probably not. If it was going to be the secret sauce to invigorate O’Rourke’s campaign, we probably would have seen a bump in the Democrats’ direction in this poll. Instead, Abbott has maintained his 46-39 in the survey despite O’Rourke’s repeated attempts to make the response to Uvalde a centerpiece of his campaign. In fact, the news looks even worse for O’Rourke when it comes to likely voters, with Greg Abbott leading 51-41 over the gun-banning Democrat.
Still, the new survey finds surprisingly strong bipartisan support for a special session to respond to mass shootings, with 80% of Democrats, 58% of independents, and 60% percent of Republicans in favor of the idea. Once the survey began to drill down on specific measures, however, a partisan split emerged; particularly when it comes to bans on so-called assault weapons. 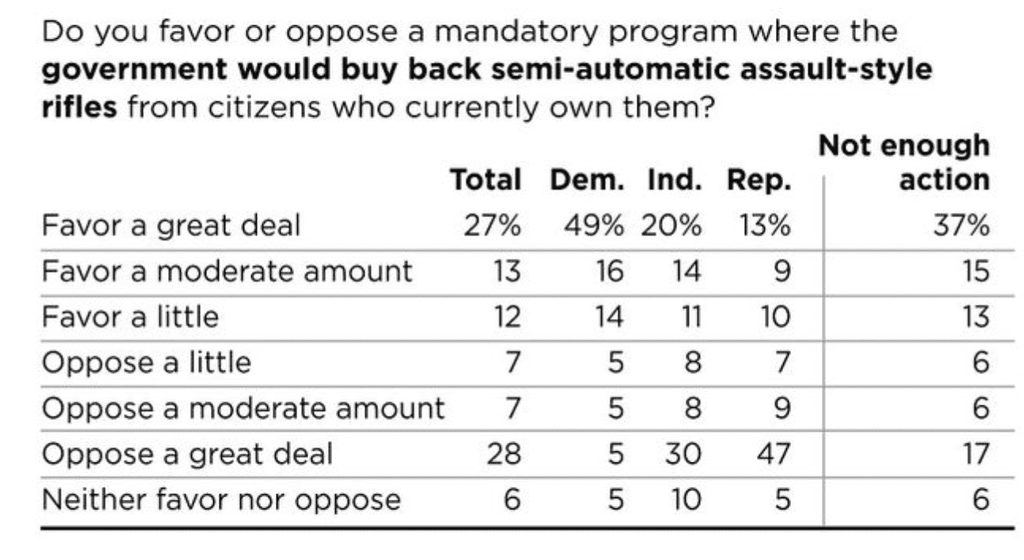 Fully 79% of Democrats are at least somewhat in favor of O’Rourke’s call to ban and “buy back” modern sporting rifles, but support for the idea plunges to 45% among independents and just 32% among Republicans, with 47% of GOP voters greatly opposed to the mass confiscation of lawfully purchased firearms.
Texas voters, however, appear to be more amenable to the idea of raising the age to purchase an AR-15. 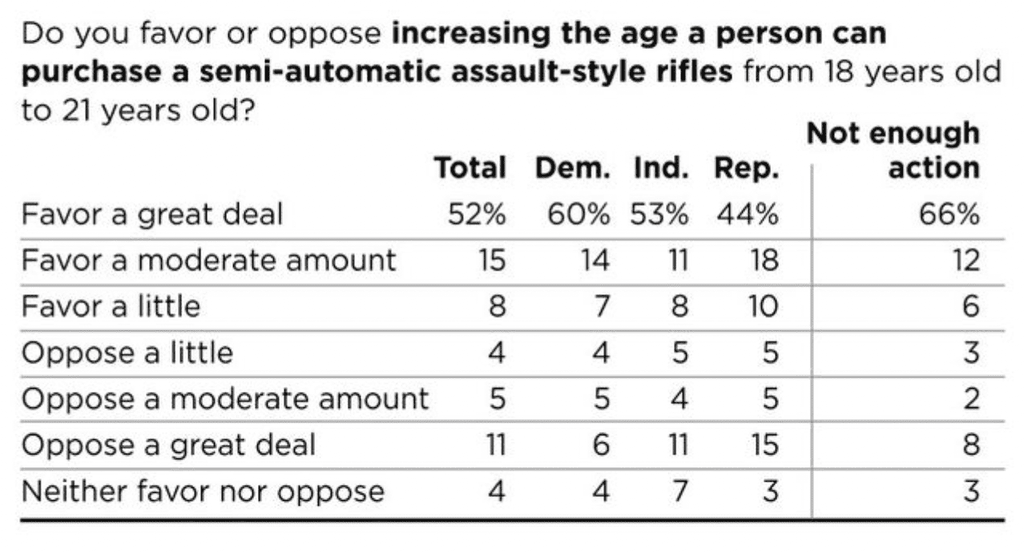 Are nearly 75% of Texas Republicans really on board with raising the age to purchase the most commonly-sold rifle in the United States from 18 to 21? I find that hard to believe, but if that’s the case then we as gun owners have some work to do in terms of educating conservatives about how our constitutional rights work.
Interestingly, the survey also asked about whether or not respondents approve of having armed school staff in place on campuses, and found the idea popular with a majority of independents and Republicans… and almost half of Democrats surveyed as well.

Interestingly, O’Rourke has been quiet on the campaign trail when it comes to armed school staff, choosing instead to focus on AR-15s and pointing to raising the age to purchase one as his starting point for action on the issue. He’s not backing away from his call to ban AR-15s outright, but he’s spending a lot of time talking about what he believes is possible to do in Texas, and this survey will do nothing to disabuse him of the notion that barring young adults from purchasing modern sporting rifles is seen by many Texas voters as an acceptable compromise.
It isn’t anything of the sort, as a three judge panel on the Ninth Circuit Court of Appeals reminded us back in May when it struck down a California law that barred most under-21s from purchasing California-compliant AR-15s. As Judge Ryan Nelson wrote in the majority opinion in Jones v. Bonta:

Our analysis of the historical record reveals several points which inform our exploration of the amendment’s reach.
First, the tradition of young adults keeping and bearing arms is deep-rooted in English law and custom. Going back many centuries, able-bodied English men at least fifteen years old were compelled to possess personal arms and had to take part in both the militia and other institutions that required them to keep and bear personal arms.
Second, the American colonists brought that tradition across the Atlantic: the colonial militias almost always included all men 18 and older, and other institutions involving keeping and bearing arms made it to our shores, too.
Third, at the time of the founding, all states required young adults to serve in the militia, and all states required young adults to acquire and possess their own firearms. Just after the founding, Congress established a federal militia, which included young adults, and required them to acquire and possess their own weapons.
Fourth, both at the founding and later, different states had different ages of majority, and the age of majority also varied depending on the conduct at issue. And finally, turning to the Reconstruction era, some states passed laws that regulated minors’ access to firearms, but most of them only regulated handguns, and only a few banned all sales of firearms to minors.

Remember, we’re not talking about minors here, but young adults. Even so, the Ninth Circuit adopted the reasonable point of view expressed in “constitutional rights were not generally tied to an age of majority, as the First and Fourth Amendments applied to minors at the Founding as they do today,” concluding “[u]ltimately, the Second Amendment protects the right of the people to keep and bear arms and refers to the militia. Young adults were part of the militia and were expected to have their own arms. Thus, young adults have Second Amendment protections as ‘persons who are a part of a national community.'”
Banning the purchase of modern sporting rifles may sound like a “reasonable” middle ground to many voters, but that doesn’t mean it’s any more constitutional than prohibiting under-21s from accessing their freedom of speech or their right to worship as their conscience (and not the government) dictates. The popularity of this unconstitutional idea probably won’t cause too many problems for Greg Abbott’s re-election campaign, but for those of concerned about the long-term security of our Second Amendment rights, the survey’s findings have highlighted an issue that we can’t afford to ignore.
Share
Tweet
Tags: GUN CONTROL VIDEO GUN OWNERS AR-15 GUN BAN GREG ABBOTT

No response from Milwaukee officials over police lawsuit
Oct 05, 2022

Florida teacher in hot water over guns on campus
Oct 05, 2022

Did Team Biden Even Consider the Optics of This Moment During Florida Trip?
Townhall
Tweeter risks wrath of some of America's most privileged lib journos in order to expose their efforts to hide their backgrounds from the public; UPDATED
Twitchy
Supreme Court to Hear Case of Man Who Got Four Days in Jail for Mocking a Police Department on Facebook
Redstate
I Know the Woke Military's Dirty Little Secret
PJ Media