A Kansas law allows adults under-21 to obtain a carry license, but how many are doing so?

Kansas has been a Constitutional Carry state for more than five years, but permitless carry is only allowed for adults over the age of 21. Last year, however, state lawmakers approved a new law allowing adults to obtain a provisional concealed carry license once they turn 18.

This week, Kansas Attorney General Derek Schmidt released a new report detailing the current numbers of concealed carry holders, and there were some surprising figures, including the number of provisional licenses that have been approved over the past twelve months.

Before we get to that, however, we should acknowledge that permitless carry hasn’t put an end to folks applying for and receiving a carry permit. According to Schmidt, there were 4,544 new applications; a substantial decline from the 7,717 applications received in FY 2021 but not a negligible number. And Schmidt says that existing carry holders are largely choosing to renew their licenses rather than let them expire.

Schmidt also said that most Kansans who already have licenses choose to keep them active. He said 15,169 renewal applications were received during the past fiscal year.

While licenses are still required in most states, Schmidt noted that Kansas licenses are currently recognized in 40 of them.

The AG encouraged all Kansans who intend to carry a firearm to pursue the appropriate training opportunities. He also reminded those who choose to carry firearms to comply with properly posted signage and all applicable laws.

There are currently more than 81,000 active concealed carry licenses in Kansas, as well as an unknown number of adults who are lawfully carrying under the state’s permitless carry rules. In fact, the number of new applications has been fairly steady since Constitutional Carry took effect, with last fiscal year being somewhat of an outlier. 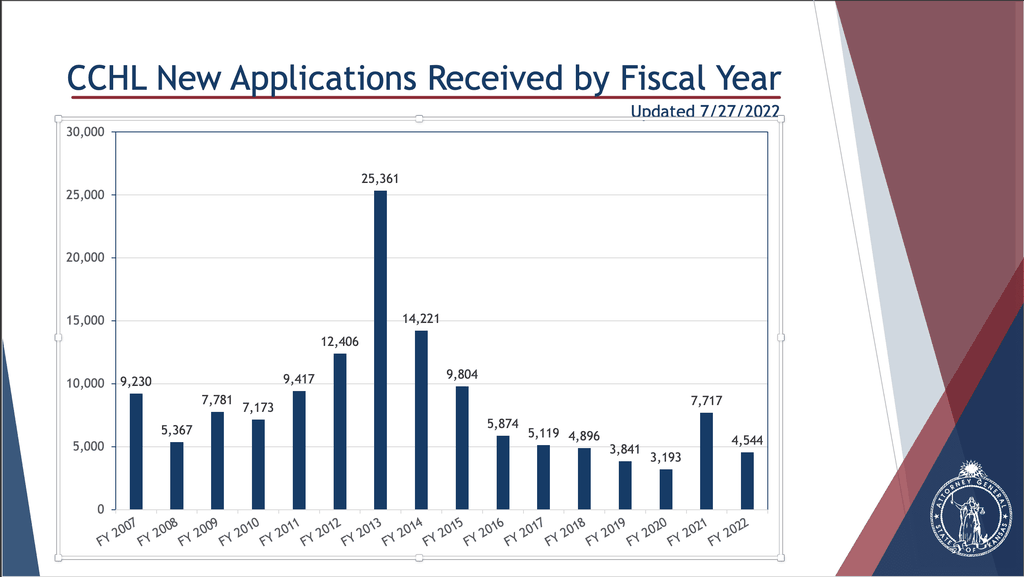 What gives? Well, given that the law just took effect last year, many young adults who might want to carry a concealed firearm may be unaware of the change in Kansas law that allows them to obtain a provisional license. Others may be choosing to simply wait until they turn 21 and can carry without having to go through the permitting process.

The process itself isn’t any more burdensome than applying for a non-provisional license, and the licenses given to under-21s doesn’t include any additional restrictions on where they can carry compared to those over the age of 21, so it is surprising to me that the state has seen so few applicants for the provisional licenses since they became available.

I’m curious to see if next year’s numbers show a significant increase in the number of provisional license applications. If this really is just an artifact of most young adults not knowing about the law, we should see the numbers go up over the next twelve months. If not, there may be deeper issues at play here that might need further addressing from lawmakers.