New York City isn’t exactly the oasis it was in the days after Rudy Giuliani cleaned it up, as a prosecutor and as mayor. Even Nanny Bloomberg managed to keep the Big Apple a habitable and visitable place. I’ve had a few recent trips into the city myself over the last few years, even though I try to avoid it like the plague. Recently I recounted a story in April about trudging through the litter-covered, drug addict oasis, and how much of a pool of filth the city has reverted back to. Well, we can all rest assured that New York’s finest, officers from the NYPD, are working hard at keeping city dwellers and visitors alike safe. A recent social media post illustrates the fine job that’s going on.

On June 25th, ironically just days after the NYSRPA ruling, five officers posed in front of a cache of weapon that was confiscated by the department. 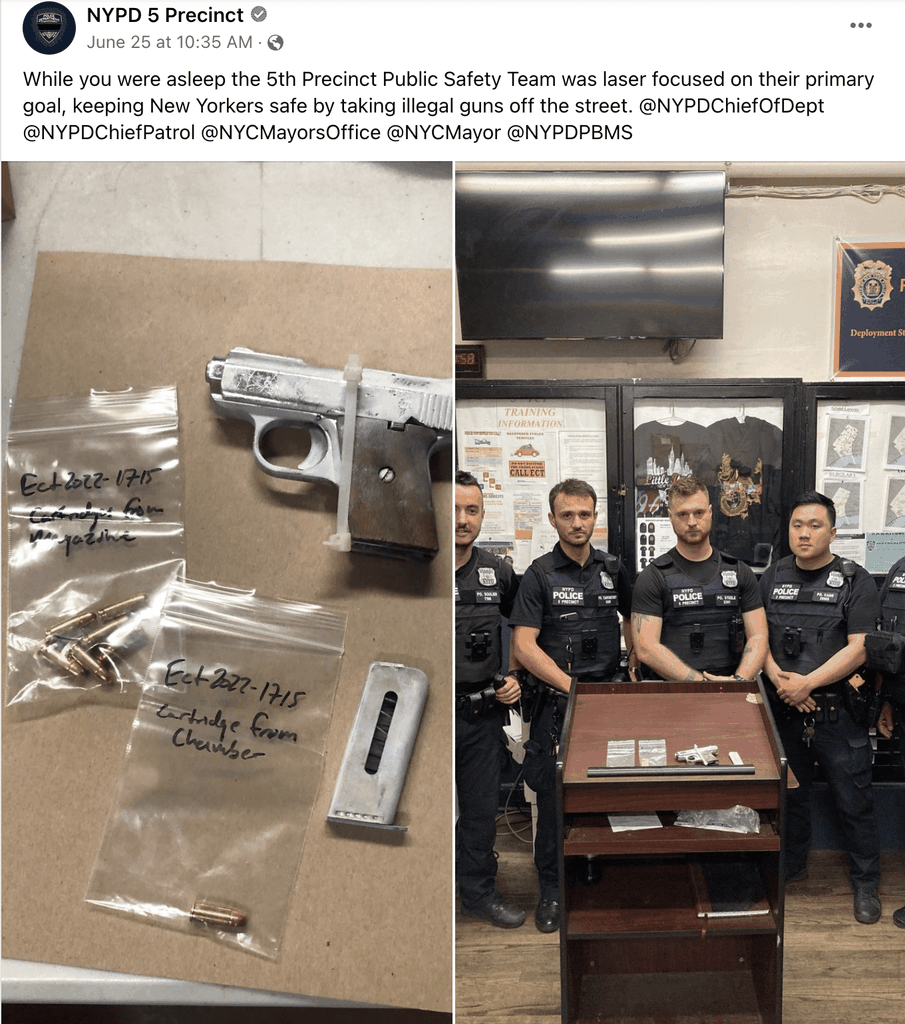 The grandiose trophy these men stood before was what appears to be a tiny .25 ACP vest pistol. It appears no black fedora or black-jack were found with the gat that these stalwart officers of the law were proudly standing by. However the villain or perhaps protagonist of a noir novel is probably lamenting the loss of this incredible piece of firepower, trenchcoat and all.

To say that this trophy picture is insulting to the public at large is an understatement. But for whatever reason, the NYPD thought it was a good idea to parade their booty around the internet for all to see during their #wedidsomething moment. Good thing there were two photos submitted, because the one with the officers is a bit of a Where’s Waldo of sorts, as the pistol in question could be mistaken for a staple remover or paperweight on the podium. You might need to zoom in on the one picture to see this incredible piece of artillery.

Attorney Evan Nappen, the famed gun lawyer from New Jersey, author, and podcast host had the following comment to offer up on the post about New York’s finest’s latest trove of contraband:

Do you guys have any idea how much of an embarrassment this is? Are you really that clueless about how this is received by the public?”

Very well said Evan, I couldn’t agree with you more.

We’re living in a glorious post NYSRPA v. Bruen world and this was the best that the NYPD had to offer? Meanwhile, the rest of the city is crumbling, with crime through the roof, and some administrative wanker thought it was a good idea to have this little photo op. Bravo. Between Mayor Adams and his own hissy fits, and classy choice of wardrobe lashing out against so-called gun violence, this is a city that’s really nailing it when it comes to public safety.

Sadly, even though the prohibitions were supposed to be lifted instantaneously last week, the law abiding in the City That Never Sleeps are not yet allowed to arm themselves for their own self-defense. The Second Amendment enumerates a right that’s becoming more relevant by the day, especially with the faulty leadership and a police force focusing on pageantry over police work.