The Second Amendment Foundation (SAF) has been doing some serious heavy lifting for gun owners and freedom lovers for decades. Founded in 1974 and has hosted 37 annual conferences, known as the Gun Rights Policy Conference (GRPC), in order to disseminate information and bring patriots together. Since the pandemic that shall not be named entered into our lives, the GRPC has been virtual the last two years, but not this year. The weekend of September 3oth, until the 2nd of October GRPC is going to be live and in person!

For the first time since the outbreak of the COVID-19 pandemic, the annual Gun Rights Policy Conference—possibly the most important event of the year for leaders and grassroots activists in the Second Amendment community—will return as an in-person, rather than a virtual, event the weekend of Sept. 30-Oct. 2 at the Westin Dallas-Fort Worth Airport hotel, 4545 W. John Carpenter Freeway, Irving, Texas 75063.

Co-sponsored by the Second Amendment Foundation and Citizens Committee for the Right to Keep and Bear Arms, the 37th annual GRPC will feature a weekend of panel discussions, special reports by leading gun rights advocates, an awards luncheon and more. The event brings together scores of speakers from across the country to offer insights on current and upcoming court cases, the outlook for state and federal elections in November, concealed and Constitutional carry updates and the impact of the Supreme Court ruling in New York State Rifle & Pistol Association v. Bruen, which affirmed the right to legally bear arms in public for personal protection.

Who all is going to be attending and speaking at the event? I tried to coax some of the names of the speakers from Alan Gottlieb, the founder and Executive Vice President of the SAF, but he’s mum on what I’m sure is going to be an all star cast of speakers. However, it was teased in the SAF release about some groups that might be in attendance.

SAF and CCRKBA leaders will be joined by representatives from Gun Owners of America, the National Rifle Association, Doctors for Responsible Gun Ownership, Firearms Policy Coalition and Jews for the Preservation of Firearms Ownership.

The 2022 GRPC will feature some 70 speakers on subjects ranging from the elections, litigation, legislation to personal protection. Expected attendance at this year’s event will be between 600 and 800 Second Amendment activists and experts from across the country. Attendance is free, information and on-line registration is available at www.saf.org/grpc

Who knows, you might even see a writer or two from Bearing Arms at this years event?

I was able to get a small glimpse of some of the names who are scheduled to speak at the conference from a trusted source and they said those names include giants such as; Stephen Halbrook, John Lott, Massad Ayoob, AWR Hawkins, Tom Gresham, Mark Walters, Stephen Gutowski and many more.

When I reached out to Gottlieb he did mention a few things to me he wanted me to relay to readers.

“This years conference will have a great emphasis on the courts as there is so much happening now that SCOTUS has ruled in the New York case. It is very exciting.
“And with Biden declaring that if Democrats keep control of Congress that they will ban semi-auto rifles next year,  legislation will be a hot topic.
“Of course, networking is always a high point. Especially since the last two years we had to be virtual. The gun rights movement leaders  can’t wait to share ideas for victory in person.”

I for one am excited about this year’s event. If you can’t attend, there will be live video of the speeches, as well as it being available after broadcast. I reached out to the Deputy Director of New Media over at the SAF, Paul Lathrop, and he told me that we can catch video of GRPC on the SAF Facebook page, YouTube page, or on the OpsLens app. But if you’re in the mood to get in on the action in person, be sure to visit the GRPC webpage and register! 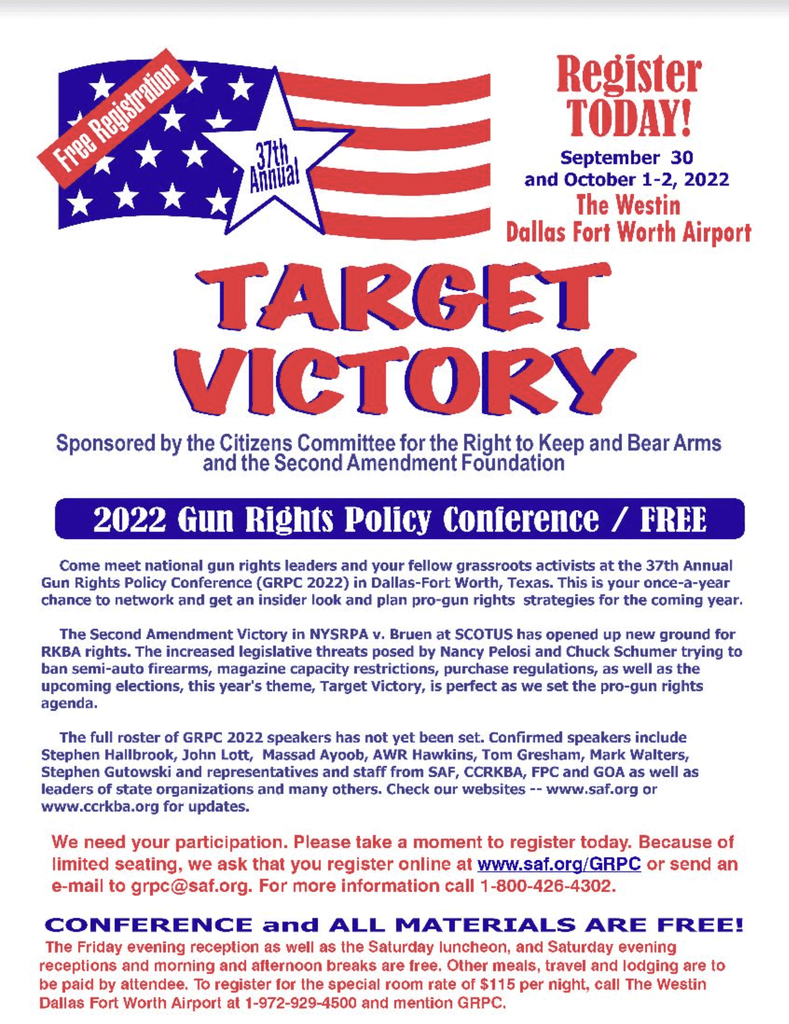