Olympian Gabby Franco and I chatted almost a full year ago, back at the end of January of 2022. It was great to play catch up with the Olympian turned advocate, and competitive shooter. Franco was also a Top Shot competitor and is highly active with the DC Project. Last year’s fiasco included a possible shadow ban from YouTube. The readers of Bearing Arms are not strangers to big tech cracking down on anything freedom or firearm related. In this latest episode, Franco was censored by the networking site Linked in.

Gabby Franco was the first female shooter to represent Venezuela in the Olympics. As an accomplished author, speaker, competitive shooter, and instructor, she is recognized worldwide for her shooting skills and advocacy for the right to own and bear arms. Gabby’s 25 years of experience in Olympic, self-defense, and practical shooting have served as a platform to educate and empower thousands of people through live and virtual training across the United States and Puerto Rico. For over eighteen years, Gabby has shown her commitment to promoting the shooting sports by not only participating and winning medals in various competitions, but also sending a message of dedication, sportsmanship, and positive attitude.

The multitalented Franco is also an author and she engages in volunteerism on the regular.

What did Franco do, or not do this time for her to be back at Bearing Arms? A recent post she made over at LinkedIn, the moderators over there apparently did not like. What was so offensive that LinkedIn had to remove the content? A picture of Franco holding two firearms. Big whoop.

What’s LinkedIn’s policy on firearms and the Second Amendment?

When it comes to advertising, they note firearms are prohibited:

Weapons, Fireworks and Other Violent Products or Services. Ads related to the promotion, use or sale of weapons, ammunition, fireworks or any other violent product or service are prohibited.

Alright, this was not an advertisement, it was a post. Further, it’s kinda laughable that LinkedIn lumps weapons in with “violent products”, as if the inanimate objects are invoking violence.

The “Professional Community” page on LinkedIn has some mention about weapons, but not firearms specifically:

Do not share harmful or shocking material. We don’t allow content that is excessively gruesome or shocking. This includes content that is sadistic or gratuitously graphic, such as the depiction of bodily injury, severe physical or sexual violence. We don’t allow content, activities, or events that promote, organize, depict, or facilitate criminal activity. We also don’t allow content depicting or promoting instructional weapon making, drug abuse, and threats of theft. Do not engage in or promote escort services, prostitution, exploitation of children, or human trafficking. Do not share content or activities that promote or encourage suicide or any type of self-injury, including self-mutilation and eating disorders. If you see signs that someone may be considering self-harm, please report it using our reporting tools and consider also reporting it to your local law enforcement authorities. Do not share material depicting nudity or sexual activity.

Weapon making is about as close as the policy is to getting to firearms. Franco was not giving instructions on making firearms. So what gives?

LinkedIn’s exact policy does not matter, much like all the other websites out there. Somewhere in the fine print in a user agreement in all these site agreements is a clause that says; “We can do what we want. Period.” And that seems to be what happened with Franco.

Not to be deterred, and I have to salute Franco on this one, she did repost the incredibly offensive material (screenshot on Facebook), edited, with the following quote:

LinkedIn took down my latest post, even though I was talking about a sport! So here is a “modified” post suitable for sensitive souls who engage in motivated ignorance on the platform…#BeToughNotWeak 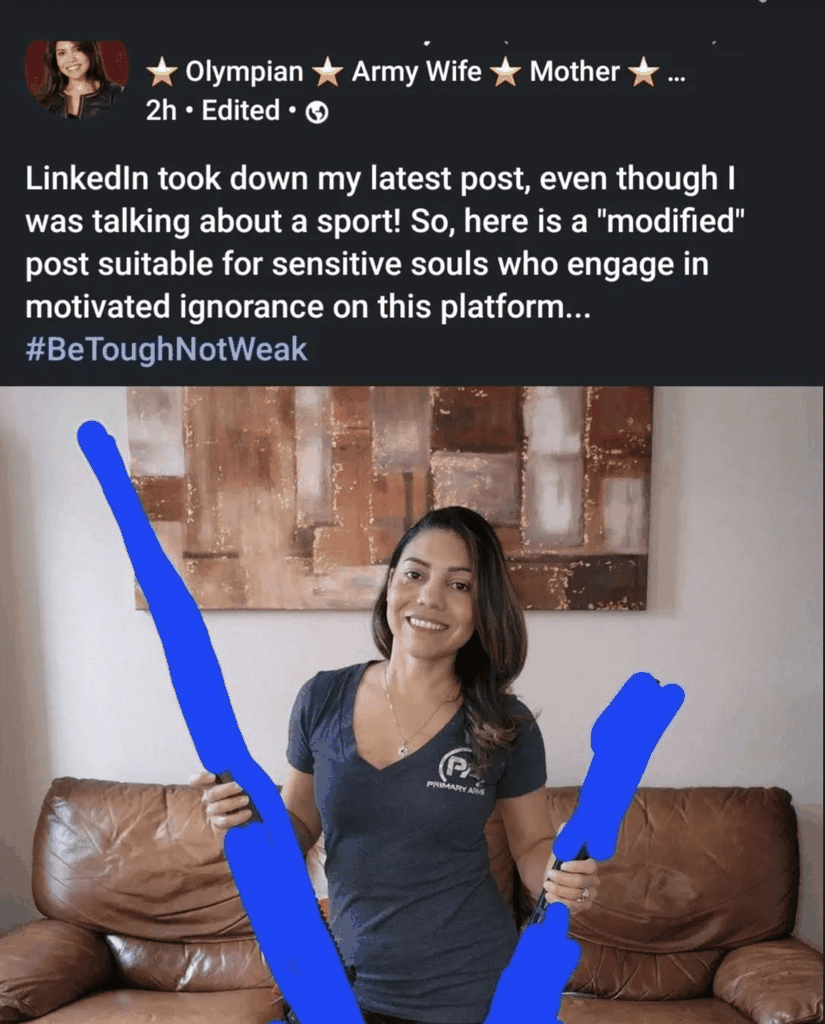 Bravo Gabby Franco! I dig what you’ve done here and applaud your determination to not be silenced. Franco, originally from Venezuela knows a thing or two about censorship, and her work around is a wonderful display of passive resistance. The loophole is just liberty finding a way, and Franco found it. What will come with Franco’s continued friction with big tech not respecting her? Hopefully nothing else. But if they do meddle with this competitive shooter, we’ll be there to report on what the public masters are up to in big tech.

Poll shows how little Californians care about their rights
Feb 03, 2023