Although there is a great amount of misinformation about the origination of “Uncle Sam,” evidence suggests that the figure’s use started during the War of 1812.

Etymologist Barry Popik brought this anniversary to the attention to HUMAN EVENTS with evidence he recently uncovered about Uncle Sam’s origination. The common myth is Uncle Sam is actually Samuel Wilson, an American meat packer from Troy, New York during the War of 1812 who put “E. A. – U. S.” on the side of his meat packages. The tale goes that American soldiers saw this and jokingly referred to the U.S. as “Uncle Sam.”

Popik, however, argues that this story is myth and that name Uncle Sam came from “U.S.” being stamped on military material like ammunition cases and knapsacks. He discovered a Bennington, Vermont News-Letter dated Dec. 23, 1812 that is the first recorded description of Uncle Sam.

The conscripts from this town, amounting to about 40, have been dismissed and sent home, sickness, has made bad work among us—according to the best information I have been able to obtain, about one half of us, are, or have been sick, 3 or 4 are dead. Several are left behind, and not heard from. The expence [sic] to this town, or more properly to the unfortunate individuals who were drafted, cannot be less than from two to three thousand dollars, exclusive of the expence [sic] to the U. States of pay, clothing, rations &c. Now Mr. Editor—pray if you can inform me, what single solitary good thing will, or can acrue [sic] to (Uncle Sam.) the U.S. for all the expence [sic], marching and countermarching, pain, sickness, death &c among us?

This newsletter was printed before Samuel Wilson even began packaging and shipping meat to the military in January of 1813.

Uncle Sam’s real origin is difficult to trace, but the figure has undoubtedly endured through American history. Uncle Sam becomes especially prominent in times of war, when Americans rally for a higher, national cause. The popularity of the Uncle Sam image rose dramatically during the Civil War and it was increasingly seen in Union posters, cartoons and songs. The “Father of the American cartoon,” Thomas Nast, frequently drew images of Uncle Sam during the Civil and perhaps more than anybody else, stamped the image into the American mind. 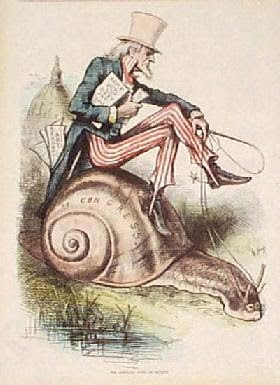 Even the Union’s greatest general, Ulysses S. Grant, had a connection to Uncle Sam. During Grant’s time at West Point students often made nicknames for their fellow cadets. In the book, Grant and Sherman: The Friendship that Won the Civil War, the author, Charles Bracelen Flood quoted William Tecumseh Sherman about how Grant got the nickname “Sam.”

Sherman said, “I remember seeing [Grant’s] name on the bulletin board, where the names of all the newcomers were posted. I ran my eyes down the columns, and saw there, ‘U.S. Grant.’ A lot of us began to make up names to fit the initials. One said, ‘United State Grant.’ Another ‘Uncle Sam Grant.’ A third said ‘Sam Grant.’ That name stuck to him.”

After the Civil War, Uncle Sam continued to grow in prominence.

James Montgomery Flagg produced what is perhaps the most famous portrait of Uncle Sam for WWI in Leslie’s Illustrated Weekly Newspaper. Flagg used a composition of the British Lord Kitchener propaganda poster that points forward and calls for recruitment, and put an American twist on it. He drew Uncle Sam in red, white and blue colors pointing at the viewer and saying “I Want You for U.S. Army”. It became the most widely used propaganda poster of the war and was widely used again in WWII.

Although patriotic recruitment posters may seem antiquated in modern culture, there is no doubt most Americans at least recognize Uncle Sam. After 200 years, he remains alive as a symbol of the American spirit.