David French: 'Give Cowards No Quarter, In Our Culture Or In Our Courts' 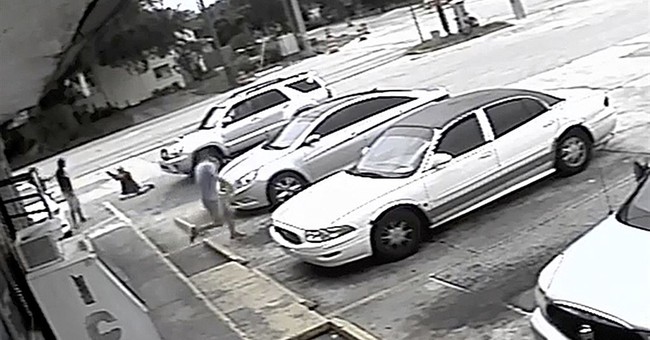 In this Thursday, July 19, 2018 image taken from surveillance video released by the Pinellas County Sheriff’s Office, Markeis McGlockton, far left, is shot by Michael Drejka during an altercation in the parking lot of a convenience store in Clearwater, Fla. The family of McGlockton issued an appeal Tuesday, July 24, 2018, through an attorney for the public to put pressure on State Attorney Bernie McCabe to file charges against Drejka, a white man who fatally shot the black father of three last Thursday upon being pushed to the ground outside a convenience store. (Pinellas County Sheriff’s Office via AP)

Over the years, the country has witnessed several controversial shootings carried out by police officers or armed citizens. After examining the evidence in each case, some were determined to be justified acts of self-defense, while others were horrifying examples of law enforcement abusing their power or armed citizens abusing their Second Amendment right to take a life in cold blood. In some of these cases, people who should now be behind bars are walking free.

In an op-ed in the Washington Post, David French, an Iraq veteran, Senior Fellow at the National Review Institute, and Senior Writer at National Review, addresses these “self-defense” cases. He proceeds to call on gun owners and members of the Second Amendment community to denounce the cowards who wrongly take someone’s life under the guise of “self-defense” and “stand your ground.”

At the beginning of his piece, French references three shootings; the shooting of  “Daniel Shaver while he was crying and crawling on his hands and knees,” the shooting of “Philando Castile in front of his girlfriend and her young child as he tried to follow the officer’s confusing instructions,” and “this week… a civilian named Michael Drejka shooting and killing Markeis McGlockton after McGlockton merely shoved him to the ground.”

The victims of these three shootings have a couple of things in common, according to French.

Cowardice is not an accusation one should make lightly. It is perhaps the ultimate insult, often delivered by people who haven’t faced danger themselves. But when a man panics in the face of risk and wrongly takes a life, cowardice is the explanation.

There is no reason to excuse or justify the cowardice of the gun owner and officers responsible for the deaths of Shaver, Castile, and McGlockton. No one should be defending the indefensible.

However, there are those who will attempt to justify these murders, and the justification is always the same. The officer feared for his or her life; the armed citizen was afraid. Defenders of these shootings may even ask, “How can you, who were not in that situation, judge how they felt or what they thought at that moment?”

The constitution protects the right to bear arms and one’s right to defend life, but the choice to serve as a member of law enforcement or be an armed citizen is left up to every individual. Exercising this God-given right, which allows people to wield great power over their life as well as the lives of others, requires great responsibility and care.

For those who believe that an individual has the right to take another life to protect their own, French says “the fear of imminent death or great bodily harm that justifies lethal force” must be “reasonable.” That, in fact, is the law.

French asks, in the case of the death of Markeis McGlockton, “was it reasonable for Drejka to believe his life was in danger after one shove? How about when McGlockton backed away the instant Drejka brandished his gun?”

The answer is an emphatic no.

If someone faces a confrontation where danger is not immediate–they aren’t staring down the barrel of a gun or another weapon and they aren’t being physically beaten–what should they do?

“Risk it. Risk that next move. Be more certain before you take a life,” French says.

Life has value. Every gun owner knows this. After all, they believe in the right to defend it. If life is worth protecting, taking a life should always give someone pause when a situation isn’t life or death.

Near the end of his piece, French praises two gun owners for a “true act of heroism” that was reported by The Post.

“I’d argue that they represent the true face of lawful American gun ownership,” he explains.

While some may take French’s position as a slight against gun owners, the right to self-defense, and “stand your ground” laws, it is far from it. He believes gun owners and concealed-carriers are good people. He acknowledges as much. What he is asking for is people to take a stand against those who damage that reputation.

This last quote from French sums up the piece nicely:

It is simply a fact that the irresponsible or reckless exercise of any given freedom undermines public support for that liberty… Those who support the Second Amendment should be unrelenting in preaching responsibility, prudence and courage.

Want to defend the Second Amendment? Uphold the original intent of the Constitution, yes. But you must do more. Give cowards no quarter, in our culture or in our courts.

The whole article is worth the read.