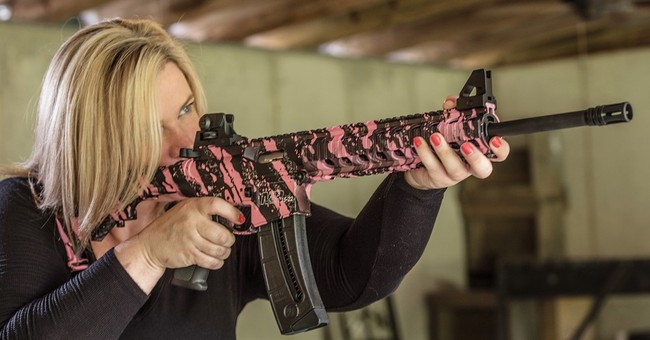 In her latest column for National Review, Bethany Mandel, an editor at Ricochet and columnist at The Forward, explains why “women need guns.”

As Mandel writes in her piece, members of the political left tend to hold two conflicting worldviews. One view is that women in the United States are living in constant danger, that one of the greatest countries in the world is a bigger threat to women than a country like Iran. The other view is that the Second Amendment, or gun rights in general, “should be repealed or, at the very least, drastically curtailed.”

According to a report Mandel cites in her piece, America is “apparently one of the ten most dangerous countries in the world for women.” Now this report, as Mandel notes, is not based on any statistical evidence. The findings come from interviews conducted with supposed “women’s experts.” While the U.S. cracks the top ten, as noted previously, Iran didn’t make the cut.

Mandel goes on to expose the hypocrisy of the left:

The notion that women are so at risk in the U.S. becomes particularly interesting when one considers that the same liberal ideologues promoting it are also diametrically opposed to gun rights.

Even under constant threat, women, if gun-rights opponents got their way, would not have the ability to protect themselves with the best defenses available. If women were really so threatened, so at risk of rape or assault at any given moment in the workplace and on the streets, what would we want them to have on their persons and in their homes to protect themselves?

She hit the nail right on the head.

Here at Bearing Arms, we’ve covered several stories where women have needed to use a firearm to defend themselves and their families. As Tom has noted on more than one occasion, men are, on average, much larger than women. To ask women to protect themselves without a firearm against a significantly bigger attacker is nonsensical.

For women, owning a firearm and knowing how to use it gives them a significant advantage if dangerous situations arise. As Mandel says, a gun levels the playing field for women; it’s called the great equalizer for a reason.

So, if the goal of feminism is to level that playing field throughout society, why do so many feminists oppose arming women to do just that when it comes to violence?

“To most feminists, feminism means eliminating power imbalances between men and women. A physical power imbalance between the sexes will always exist. But guns can level the playing field, potentially saving women’s lives in the process,” Mandel states.

Her piece also touches on the fact that women don’t need a firearm only to protect themselves from people who are outside of the home. Sometimes women need access to a gun to protect them from their spouse or another family member.

“Would we want the strongest defense available to women to be pepper spray or a gun?” Mandel asks.

The answer is the gun, no question.

You can check out Bethany Mandel’s full article here. It’s worth the read.