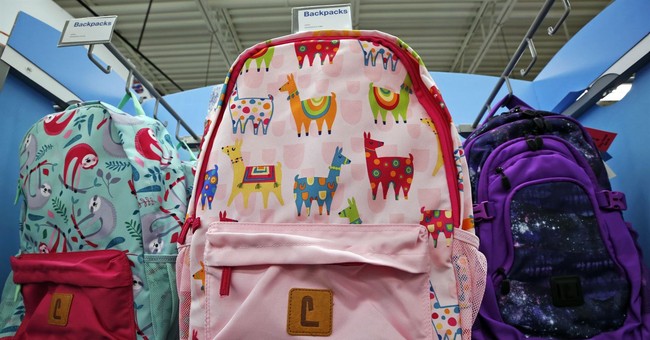 Students across the country are getting ready to head back to school. For some, the school year has already started. Like every year, as summer winds down, parents set out to buy their kids’ school supplies, picking up notebooks and binders, lunchboxes, and new backpacks. But more than knowing their child is prepared for their classes, at the forefront of many parents’ minds is the issue of school security and the potential for mass shootings. For parents who are concerned for their child’s safety, there’s a new backpack that can help protect their kid if the unimaginable were to happen.

The backpack just so happens to be bulletproof.

In an interview with Fox 13 in Memphis, Chip Holland, the Vice President of Training and Education at Gun Range USA in Memphis, put the bulletproof backpack to the test. After placing a textbook and a few notebooks into the bag, Holland strapped it to the back of a dummy down range.

After opening the backpack, the bullets are shown to have passed through the front and lodged themselves into the thick textbook. It did its job. But Holland shoots at it again, this time without the school materials in the bag.

After firing more rounds into the backpack, he rechecks it. Impressively, the bullets pass through the front of the backpack but are stopped by the bulletproof material in its backing.

When asked if the backpack is worth the buy, Holland says it does what it’s designed to do.

During the interview, Holland also shoots the backpack with an AR-15. The rounds pass through the entire bag without a problem. While that may give one pause, the backpack is designed to stop 9mm rounds, as most mass shootings have been carried out with handguns (despite what the mainstream media may have you think).

A graphic by Fox 13 Memphis shows that between 1982 and 2018, 81 mass shootings involved the use of a handgun. Shooters used a rifle in 41 instances.

As Fox 13 Memphis notes, “The National Institute of Justice certified this backpack to defeat a 9-millimeter round, but not that of a AR 15. That weapon was no match.”

Nearly four years ago, Florida State University experienced a school shooting. One student, because of a bunch of books in his backpack, had his life saved. Imagine for a moment if his bag was empty, or had a lesser amount of books in it. Would the then 21-year-old student be alive? This incident is just one example of how a backpack has unintentionally saved a life.

So, what do you think of the bulletproof backpack? Would you buy one for your kid or even for yourself? Is it worth the investment?

If considering a purchase, Fox 13 Memphis states, “We bought our backpack online. A Google search will give you plenty of options. But if you’re going to buy one, make sure it is certified by the National Institute of Justice. If you want to purchase the one we did, you can find it here.”

Watch the full video below.