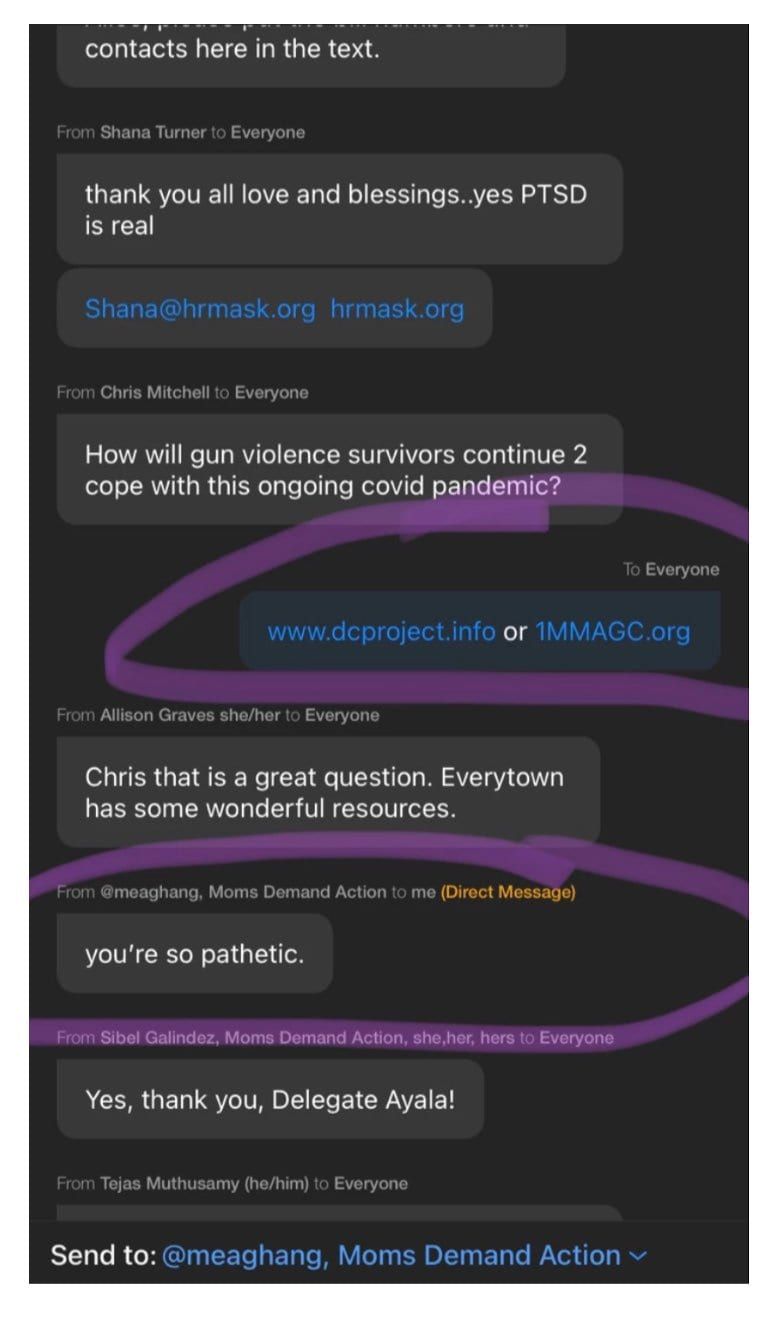 Granted, I get this type of thing often from Moms Demand Action for Gun Sense In America members. Instead of having a civil and open conversation, either my questions are ignored, I’m blocked, or I’m belittled. You’d think that someone who advocates for things like “gun safety,” all for the sake of keeping people safe from gun violence, would know better than to insult a supposed gun “extremist.” I mean, that doesn’t even make sense. I’m supposed to be the one lashing out calling people pathetic at random, right? (Cause I’m so-called “extreme” and stuff.)
If I’m afraid and allergic to bees, why the heck would I poke a nest with a stick? Fortunately, I carry an EpiPen around for interactions with bees (and members of Moms Demand Action for Gun Sense in America), but what I find even more concerning than Meagan’s intolerance is that there is no way for the public to view this public National Gun Violence Survivors Week Roundtable hosted by Delegate Hala Ayala anymore. In my several screenshots from the actual meeting, I took note that the event was being recorded, but if you want to go back and catch the replay, tough luck. Since the event was also shared through Facebook Live, you could go to Delegate Hala Ayala’s campaign page and catch it there, but now even the post for it has been deleted. WHY?
Anyway. Other than a few technical difficulties, lack of subject matter, and the bias displayed in the chat room, the meeting was very informative, especially for us on “the other side.”
As I said to the chat room as Delegate Hala Ayala closed the Zoom, “Thanks for the open forum.”
It came in handy.
Share
Tweet

Here’s the Alarming Phrase in the Order About the Trump Raid Affidavit
Townhall
Sam Harris clarifies that clip where he says he wouldn't have cared if Hunter Biden had children's bodies in his basement
Twitchy
Harriet Hageman Accused of Lying About Liz Cheney Concession, Then She Released the Voicemail
Redstate
Feds Swear Trump Investigation Was in 'EARLY STAGES' When FBI Stormed Mar-a-Lago. Oh, Really?
PJ Media