Everytown's Hypocrisy On Display In Oregon 2A Sanctuary Case

By Mom at Arms | May 17, 2021 7:30 PM ET
Share Tweet
Share
Tweet
Earlier today, we reported on a new challenge to an Oregon County’s Second Amendment Sanctuary ordinance, but let’s revisit the issue and dig into the fact that Everytown for Gun Safety is all in on using the courts to try to strike down this law.

The group Everytown for Gun Safety is pushing for the measure to be overturned. Managing director Eric Tirschwell said it would be the nation’s first court test of a Second Amendment sanctuary law.
Everytown argues that the ordinance violates the U.S. Constitution, which says federal law supersedes state law, as well as the state Constitution and an Oregon law that gives the state power to regulate firearms.
The decision won’t have a direct effect outside Oregon but could send a message.
“This case is important and should send the message that where state or local jurisdictions attempt to unconstitutionally or unlawfully nullify gun safety laws, we are prepared to and will go to court,” Tirschwell said.

Eric Tirschwell is the “director of Litigation and National Enforcement Policy at Everytown for Gun Safety.” A former Assistant U.S. Attorney for the Eastern District of New York, Tirschwell has been seen in random articles, voicing his Bloomberg bought, stance on how states throughout the nation handle “gun violence.” Back in 2019, when a Florida court struck down a 2011 state law that threatened the state’s locally elected officials with a $5,000 fine if they passed local regulations on firearms, Tirschwell was front and center.

The lawsuit was filed by the group Everytown for Gun Safety and representatives from more than two dozen local governments following the 2018 mass shooting at Marjory Stoneman Douglas High School in Parkland, where 17 people were killed.

“This ruling is particularly significant because it is the first time any court has found that the gun lobby’s preferred extreme form of firearms presumption is unconstitutional,” said Eric Tirschwell, managing director of Everytown Law, the litigation arm of Everytown for Gun Safety. “The decision is welcome news for cities trying to respond with action, even if their ability to act continues to be limited by gun lobby-backed presumption laws.”

So, as 2021 brings forth new avenues for gun control extremists to present themselves, Eric Tirschwall of Everytown says that they’re going to fight/support this court action using the argument that “Federal Law Supersedes State Law.” If the court rules in favor of that, then it could have much more far reaching consequences for residents of Oregon, such as opening the door to get rid of legalized cannabis.
Cannabis is illegal at the federal level, so states that legalize it are giving federal law the middle finger, much like 2A sanctuaries are positioning to do. If courts rule that “no, if states and municipalities must adhere to federal laws, they don’t get the right to oppose them,” then the door is open for anti-cannabis groups (in this case, specifically in Oregon) to sue the state and municipalities and have recent case law on the books to wipe out the state’s law regarding cannabis, all thanks to Everytown for Gun Safety and their allies.
What will happen?
Well, the “war on drugs” will be back in terms of cannabis being at the same level as cocaine or meth. Meaning… MORE criminal charges and arrests.
It’s also worth pointing out Tirshwell’s (and Everytown’s) hypocrisy when it comes to ignoring state laws. The gun control group has helped local municipalities like Pittsburgh, Pennsylvania defy state laws regarding firearms preemption. 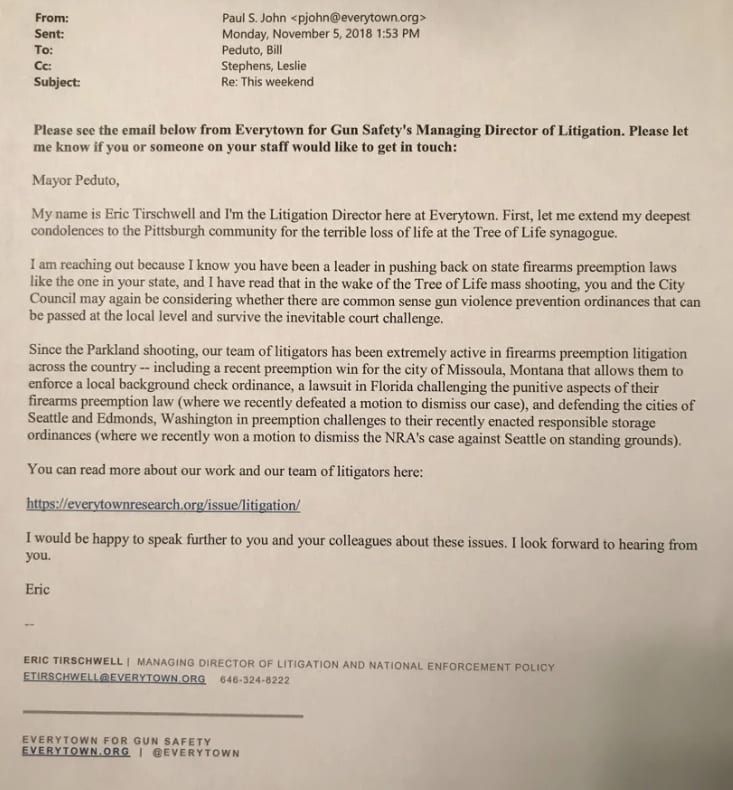 Yep. That’s an email (obtained by Mom-at-Arms researchers in 2019) sent by Tirschwell himself to Pittsburgh mayor Bill Peduto, days after the 2018 Tree of Life Synagogue Shooting in Pittsburgh. He was recruiting Peduto to push back against PA’s preemption laws, much like how on the opposite side, many counties and municipalities are pushing back against state level and federal gun control laws.
It’s clear Tirschwell will take any position, including those that directly contradict his own previous statements, as long as it helps to pave the way for more restrictions on our Second Amendment rights. The blatant hypocrisy of anti-gun activists may not be breaking news, but it’s at least worth pointing out.
Share
Tweet
Tags: GUN CONTROL GUNS VIDEO OREGON EVERYTOWN FOR GUN SAFETY FIREARMS PREEMPTION

How a California cop killer "slipped through the cracks" of supervised probation
Aug 14, 2022 12:30 PM ET

Afghanistan and the Collapse of Normals’ Faith in the System
Townhall
So First Lady Jill Biden is not a fashion doctor and the internet has noticed, let the pouncing commence
Twitchy
Report: Surprising Private Message Trump Sent to Merrick Garland After Mar-a-Lago Raid Revealed
Redstate
Yes, They're Going to Arrest Donald Trump. Deal With It.
PJ Media