ROCHESTER, N.Y. (WROC) — Gov. Andrew Cuomo announced Wednesday $16 million to reduce gun violence across New York State and Rochester will be receiving $2.25 million. Earlier this month, the governor declared a disaster emergency on gun violence for the state of New York Tuesday, a first-of-its-kind disaster emergency for the country. In addition to each area’s existing network of community groups, youth will be referred by trusted community service providers with priority given to referrals from gun violence interveners and other anti-gun violence advocacy organizations.

Now, why is this crooked? Let’s look at what JUST HAPPENED to the Mayor of Rochester, NY:

Rochester, New York, Mayor Lovely Warren (D) will be arraigned on weapons charges Wednesday morning.
WHEC reports Warren and her husband “have been charged with criminal possession of a firearm, which is a Class E felony.”
They also face “two counts of failure to lock/secure firearms in a dwelling.”
The Monroe County District Attorney indicates the Warren home was searched by New York State Police on May 19 and officers discovered a “Standard Manufacturing STD-15 rifle and a Kal-Tec P-40 pistol.” Neither weapon was registered to Warren or her husband.
Additionally, Warren and her husband face charges of “endangering the welfare of a child” because a 10-year-old child was found in the home alone when officers arrived.

And shocking! She’s aligned with a prominent “anti-gun violence advocacy organization“ that can be part of this program and get state funds. 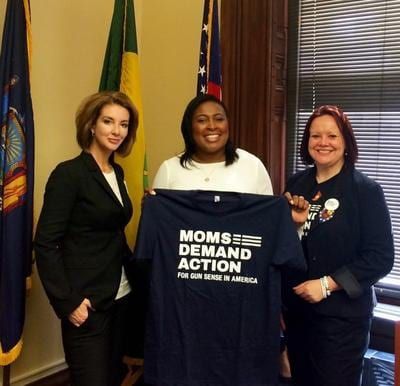 We covered her previous relationship with Moms Demand Action/ Everytown, which is based in New York, here. The group and the mayor have ties dating back to at least 2015.

On Tuesday the Mayor met with one advocacy group, Moms Demand Action, which formed in response to the Sandy Hook Shooting in 2012.

Janina Bandi is an organizer. She says local politicians have a lot of power to address gun violence.

Oh, Lovely Warren’s having an impact on this issue for sure. She’s helped to once again demonstrate the hypocrisy of gun control activists and anti-gun politicians, as well as their allies in the media. Forget the money for a second. If there was a photo of a Second Amendment activist like Wayne LaPierre or Alan Gottlieb smiling and presenting a branded t-shirt to a mayor who ended up arrested on gun charges, don’t you think the Washington Post and MSNBC would have a field day pressing them for comment?
To the best of my knowledge, not a single news outlet has asked Shannon Watts what she thinks about of a Moms Demand Action-supporting mayor being charged with felony gun possession. They haven’t showed that picture up above. And they won’t, because most reporters and editors don’t want to do anything to hurt the cause, even if that means sacrificing their supposed objectivity.
Now consider the fact that this same media is supposed to be a watchdog ensuring that this influx of federal cash gets spent appropriately. Think that’s going to happen? Think they’ll raise any questions if Lovely Warren cuts a large check to Moms Demand Action/Everytown? If that check is cut do you think Shannon Watts will be asked about the appropriateness of taking money from someone facing felony gun charges?
Me either.
Once again, we see the dirty tricks involved with the gun control movement and their allies. It all revolves around money and access to power, even when their own are caught breaking the very gun laws they cherish so much.
Share
Tweet
Tags: GUN CONTROL GUNS VIDEO NEW YORK SAFE ACT MOM'S DEMAND ACTION

Does the Salt Lake Tribune want a civil war?

What happened to San Jose's insurance mandate for gun owners?