It’s hypocritical to advocate for more gun control repackaged as “gun safety,” while failing to practice actual gun safety yourself. From Iowa we have this report:

A Democratic Iowa House candidate has been charged with reckless use of a firearm after police say she shot a gun through a sliding glass door in her home last week.

Heitshusen, a former WHO-TV news anchor, said in a statement that she has received a variety of threats over the years due to her role as a journalist and now a candidate for office. Because of that, and because her partner is a police officer “there are firearms in our home for personal protection,” she said.

“I’ve received ongoing threatening messages on social media,” she said in the statement. “Knowing my partner was leaving town for an extended period of time, I checked one of the firearms, and while checking it, an accidental discharge of the firearm occurred.”

West Des Moines police say in a criminal complaint that Heitshusen pulled the trigger of a black Glock 21 handgun while inside her home sometime around 11 p.m. on June 27. The bullet went through the glass of Heitshusen’s sliding glass door, police said.

This looks like a negligent, not an accidental, discharge, because of a failure to follow the Four Rules of Gun Safety.

Heitshusen has pleaded not guilty. Her attorney, Grant Woodard, said she would vigorously defend herself in court.

“We believe that this is utterly baseless,” he said. “No crime was committed and Ms. Heitshusen will be exonerated, ultimately.”

The police complaint states that Heitshusen told law enforcement officers “that as she was placing the handgun onto the kitchen table, she pulled the trigger, discharging it.”

There was no safety on the gun, and the gun did not belong to Heitshusen, according to the criminal complaint, which was filed Tuesday in Dallas County.

Guns don’t go off on their own, and the Glock 21 is a reliable weapon that has a “Safe Action System” and won’t fire without deliberate human action on it. This looks like a mess-up on her part, and the claim that there was no safety on the gun sounds like baloney unless the gun was somehow modified.

There’s another angle to this story, originally reported by Iowa Field Report:

The report also indicated that alcohol was a factor in the event.

It turns out that the candidate has a prior history with mismanaging her alcohol consumption:

In the summer of 2014, Heitshusen was arrested for drunk driving. She later pled guilty to the charge that Fall.

The source also questioned the delay in filing charges against Heitshusen. The criminal complaint says the incident happened on June 27 and that a West Des Moines police officer responded to the scene. But Heitshusen wasn’t charged until July 5.

“Why the delay?” the source asked, noting that Heitshusen’s boyfriend is a Des Moines police officer. “Was this his duty gun? Was there any effort to involve State Auditor Rob Sand? This is something that should have been handled right away on scene.”

The source pointed out that the physical evidence at the scene should be carefully examined to ensure that Heitshusen’s description of how the gun fired is true.

“If the gun fired, as she says, when she placed it on the kitchen table, the bullet hole in the glass should be at the same height as the table” the source said.  Of course, if the physical evidence doesn’t match her description it leads to the question of whether this was an accident or deliberate, something that would be far more serious.

Heitshusen has been charged with 724.30(3) Reckless use of a firearm – Property Damage, which is an aggravated misdemeanor and, according to the Des Moines Register, could carry a sentence of up to two years if convicted.

Heitshusen has talked about “gun safety” and “common sense gun laws” in the past on social media, so the contrast between her rhetoric and what happened isn’t flattering. 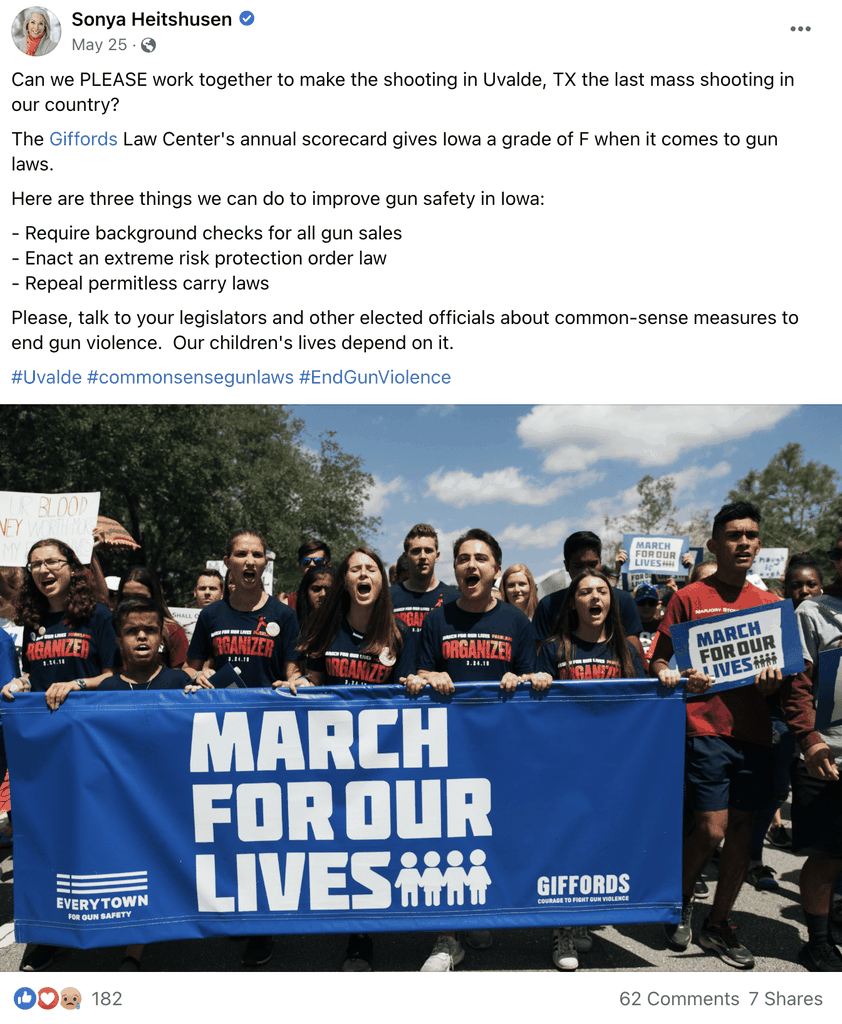 Another point I’d like to note is that various new outlets covering this story – Des Moines Register, Axios Des Moines, and KCCI – have not mentioned the alcohol angle that was originally reported by Iowa Field Report. Maybe in the end it will turn out to be nothing, but when the affidavit mentions “POSSESSED ALCOHOLIC BEVERAGES/CONTAINERS” as a General Probable Cause, that’s a detail that ought not to be swept under the rug. Time will tell where this case ends up heading.

Latest 'Gold Standard' Review Puts The Final Nail In The Coffin For Masks
Townhall
Jerome Adams' attempted swipe at DeSantis over 'health decisions' BACKFIRES in a most spectacular way
Twitchy
There Are Big Problems With Biden Team's Evolving Story About Prior Chinese Balloons
Redstate
Biden's Story About the Spy Balloon Doesn't Add Up; Here's What Most Likely Happened
PJ Media