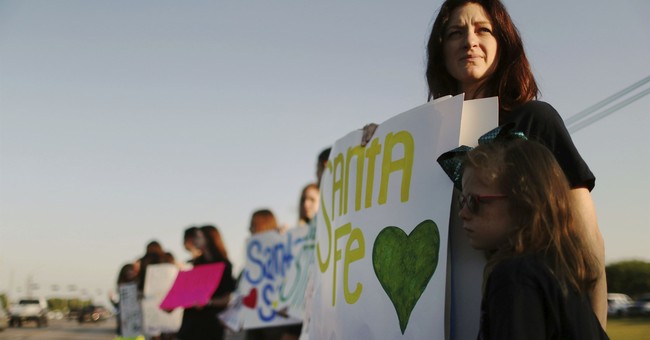 School shootings are horrible events. It’s awful to think of young lives snuffed out so quickly and for no reason. Despite what anti-gun activists might think, we’re not oblivious to the horrors here. We just know there are different, and better, solutions that won’t punish people who did nothing wrong.

But as awful as it is for us, it’s infinitely worse for the parents who lose children to these tragedies. As bad as that is, though, how would it be if you lost your child while they were in a completely different country?

That’s the reality for the parents of one of the victims of the Santa Fe school shooting, and now they’re suing the people they think are at least partially responsible: The gunman’s parents.

Sabika Sheikh was one of 10 people killed in May after [the killer] allegedly opened fire inside Santa Fe High School.

Her parents, Abdul Aziz and Farah Naz, filed suit against [the killer’s] parents, alleging they “negligently and irresponsibly stored their firearms so their son could access them.”

The lawsuit also claims that [the killer’s] family ignored warning signs showing their teenager was a risk to others, including his fascination with the Columbine High School shooting.

Aziz and Naz are being represented by the litigation team from gun control group Everytown for Gun Safety.

“Like all gun owners, gun-owning parents have a responsibility to securely store their firearms,” Molly Thomas-Jensen, counsel for Everytown for Gun Safety, said in a statement.“What happened at Santa Fe High School is a tragic reminder of why responsible gun storage is so critical. We’ll do all we can to deliver some measure of justice for Sabika’s family — and to prevent future tragedies by highlighting the deadly risks of irresponsible gun storage.”

Well, I have to give it to Everytown this time. At least now the organization’s not blaming the people who made the guns for what happened.

That’s about where this ends.

Keep in mind that the parents of the shooter have already been impacted negatively by this event. They’ve taken a significant emotional toll. I’m pretty sure they’re already asking if they should have done more and if so, what? Their son was fascinated with a mass shooting, sure, but kids are sometimes into some weird crap.

How bad were these warning signs? Were they so bad that there should have been more done? Well, we’ll find out in the court case, I suppose.

But I somehow doubt this is going to court. I suspect the killer’s family will try to get this over with as soon as possible, if for no other reason than to minimize the expense.

Court cases are expensive, so while a group like Everytown can shoulder the burden for the victim’s parents, not everyone has that option. And Everytown knows it. They’re using their resources to slam these parents who are already suffering (though not as much as the victim’s family, to be sure) as an object lesson.

They’re not going for justice here. Everytown wants to punish people. They want to make us all terrified of having guns in any way that someone might access them without our permission.

That’s the goal here. Nothing else.