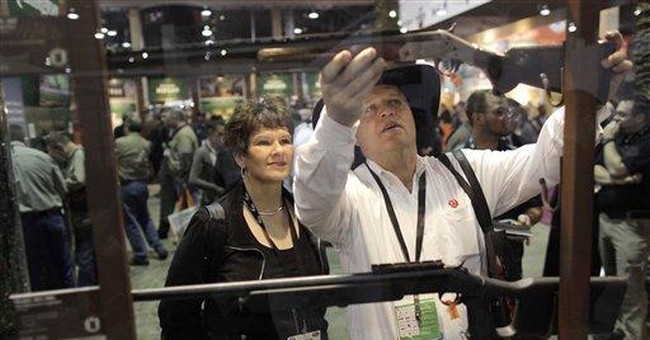 There’s been a lot of recent unpleasantness regarding gun shows in California. The state has a universal background check law in place, so it can’t reasonably expect the “gun show loophole” crap to fly in its arguments, but it still has done plenty to try and make gun shows a thing of the past.

Now, one site that banned gun shows is finding out the hard way that gun people don’t just roll over.

A group of firearm dealers and Second Amendment advocates is suing a California county fair board, alleging that its decision last year to ban gun shows restricts the Constitutional rights of gun owners.

The lawsuit against the Del Mar Fairgrounds of San Diego County was filed Monday in the U.S. District Court for the Southern District of California.

The primary plaintiff is B & L Productions, which claims to be the largest vendor of gun show events in California. It has hosted gun shows at Del Mar Fairgrounds for more than 30 years.

Other plaintiffs include a number of gun show attendees and vendors, who alleged the closure would force them to travel hundreds of miles to attend a similar events. Several Second Amendment advocacy groups, including the California Rifle and Pistol Association, also joined the lawsuit.

“Gun shows have been held at the Del Mar venue for more than 30 years, with no safety issues raised by local law enforcement or the fair board,” the rifle and pistol association said in a statement. “Nonetheless, the Del Mar Fair Board bowed to the political pressure of anti-gun activists and gave in to those board members with particularly strong bias against the tens of thousands of individuals who attend these shows.”

The board put a one-year suspension on gun shows, then seems to want to look at alternatives like gun safety shows or educational events.

They fail to understand that what tends to attract people to gun shows are, well, guns.

Oh, but the board feels perfectly justified in doing this. Why? Because some bad guys got caught trying to circumvent the process.

“We’ve had actually two meetings with DOJ and there have been a number of arrests of felons in the possession here on the fairgrounds,” Board President Steven Shewmaker said in the meeting, according to KPBS. “Sending their wives and girlfriends in to buy ammunition and guns here at the fairgrounds. A number of arrests, in fact, I think he said one particular Saturday — a year or two ago — there was four such arrests in the parking lot. Is that safe? I don’t think so.”

Holy crap on a cracker.

Those are illegal straw purchases and guess what? If they hadn’t had the gun show to go to, they’d have walked into a regular gun store. The difference is that then they probably would have pulled it off.

Gun shows get a lot more attention from law enforcement. There’s a greater need for security. Those arrests only happened because they tried to buy at a gun show, for crying out loud.

The truth is, they were looking for an excuse. They didn’t want guns there, and now they were able to push them out.

Unfortunately for them, gun people aren’t the “roll over and die” sort of people. We fight.

I’m glad to see this lawsuit happen. The anti-gun nitwits need to learn that there are consequences for their actions. They need to start understanding that this is what they’ll face every time they pull this stuff. It needs to become part of their decision-making matrix. “Will there be a lawsuit?” needs to change to, “There will be a lawsuit. Can we afford it?”