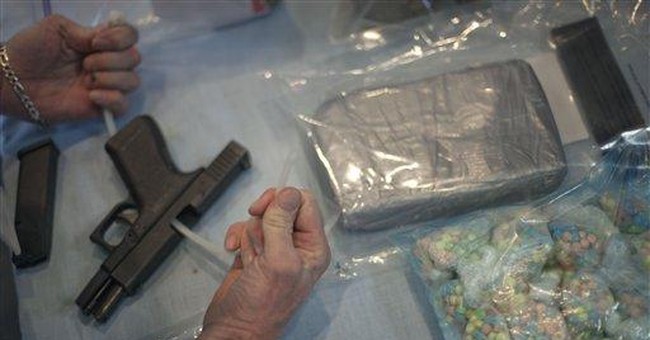 More than once, I’ve commented about how policing is a tough job. On the best of days, you’re probably pissing someone off by enforcing the law. It’s not a job for the conflict-averse by any stretch of the imagination.

However, it’s also a dangerous job. Thus far, 2019 has illustrated the risks to a significant degree.

Monday evening in Houston, we got yet another reminder.

About a dozen narcotics officers, along with several patrol officers, had responded to a residence where police suspected drugs were being sold, Acevedo told reporters late Monday night. The narcotics officers announced themselves as they breached the front door shortly before 5 p.m. Then, the gunfire started, Acevedo said.

“Immediately upon breaching the door, the officers came under fire from one or two suspects inside the house,” Acevedo said.

One suspect retreated to the back of the room, the police chief said, then re-emerged and again returned fire.

Four undercover narcotics officers were struck by gunfire, police said. A fifth officer suffered a knee injury, according to Acevedo.

Initial reports claimed that five officers were shot. Apparently, this was because a fifth was injured and in the chaos immediately surrounding such things, it was assumed by someone that the officer in question was shot as well.

Two of the officers were in critical condition Monday night, yet officials say both men are stable. Another has already been released following treatment. The fourth officer is reportedly listed as being in good condition.

The suspects’ names haven’t been released, so we know absolutely nothing about them. That includes their criminal history. Though it’s likely that both have a lengthy one. It’s highly likely that neither could own a firearm legally and were using black market weapons to shoot at the officers in question.

It’s also likely that some enterprising anti-gunner will try to use this to push for more gun control in Texas and claim it’s about officer safety or something like that.

Unfortunately for everyone, there’s not any real way to keep guns out of these people’s hands. Don’t believe me? They were drug dealers. We’ve banned drugs of all kinds in this country, yet they keep pouring in. Let’s ignore marijuana for a moment since it’s in a weird area right now. Instead, let’s look at drugs like heroin and cocaine. Both of those require being smuggled into the country, even if they’re somehow manufactured here in the United States.

We’ve been at war with drugs for most of my lifetime.

If we can’t stop this despite an entire agency being devoted to combatting the drug trade, what makes these people think we can stop criminals from getting guns?

Those guys weren’t likely to be National Rifle Association members who purchased their guns legally by any stretch of the imagination and we all know it.