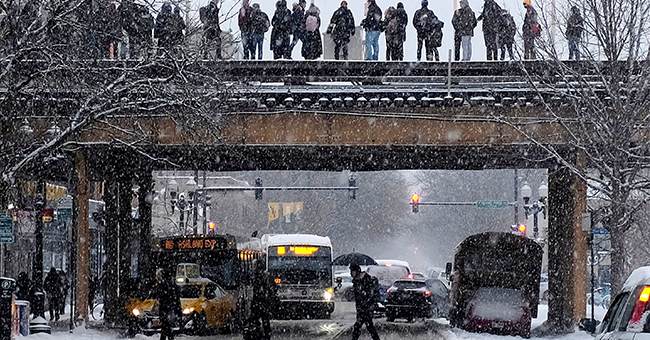 If you live in rural America, you probably get frustrated when self-appointed urban elites decide they know what’s best for you and your community. In most cases, that means gun control. But these elites don’t understand how gun control could be a disaster for rural communities.

In fairness, the elites don’t understand how gun control can be a disaster for their cities either.

But a recent video has surfaced that shows a man in Chicago using a firearm to defend himself after being attacked by two younger men.

As Brandon Morse over at our sister site RedState notes:

As the older man came into view, he could be seen holding a gun at the youth attacking him.

Up until that point, hardly anyone had murmured a peep about the man being assaulted. It was only when he drew his firearms that people began to panic. Screams could suddenly be heard from women within the McDonald’s with one screaming “NO!” as the man pushed forward with his pistol raised.

Thankfully, no one was seriously hurt as after the pistol was drawn, the incident deescalated. The young men seemingly moved off, no longer interested in assaulting the older man.

Morse argues that we can take two things away from the video. One is that a good guy with a gun does end violence and the other is that people watching didn’t have an issue with what was happening until the gun appeared.

I want to expand on that second point a bit.

You see, my view is that it becomes clear that the issue isn’t violence. If it were, people would have been upset at what they saw. Especially as two attackers pushed the man against a brick wall while one started grasping at the man’s head. Bricks plus head can equal dead. The older man was in fear of his life. Of that, I have no doubt. He was outnumbered by young, aggressive males who were grabbing his head in what anyone can assume was an attempt to bash his skull in.

And none of that was an issue.

The gun was the problem. At that moment, we suddenly had an issue.

The truth is, no one in Chicago cares about violence as a whole. That video makes it clear. Two young males can beat an older man senseless, and no one seems to notice. The moment the older man pulls a gun, suddenly it’s a problem.

Unfortunately for Chicago, that proves that the issue isn’t guns. The issue is a population that doesn’t give a damn about their fellow man. Like we’ve been saying for ages, it’s a people problem, not a gun problem. People in Chicago are fine with violence. They don’t get outraged over it until it’s someone they care about who is attacked. It’s downright tribalistic.

But it’s no wonder Chicago seeks to impose limits on rural Illinois. It’s no wonder that urban centers, in general, try to impose their will on small communities throughout their states. For them, violence isn’t the issue. It’s guns and nothing else.