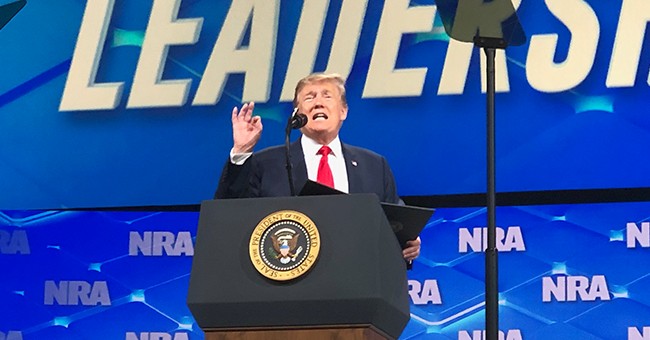 If there is anything state officials in New York dislike more than the NRA, it’s probably President Donald Trump. The progressive state officials are part of the Democratic Party, and it’s part and parcel for the party to despise everything the president does just because it’s him doing it.

While the state has been a thorn in the NRA’s side, it has stepped it up as the state’s attorney general is calling for the IRS to yank the NRA’s non-profit status.

President Trump has thrown his lot in with the NRA, however, and that infuriates officials in New York.

New York’s governor assailed President Donald Trump on Monday for backing the National Rifle Association in its dispute with the state, accusing the U.S. leader of being afraid of the powerful gun lobby.

In a statement directed at the president, Cuomo said 74,600 Americans had died from gun violence since Trump was elected in November 2016.

“You have done nothing but tweet about it,” Cuomo said. “Unlike you, President Trump, New York is not afraid to stand up to the NRA.”

Ever notice how people like Cuomo seem to believe people like President Trump would back gun control if they weren’t afraid? They can’t imagine anyone disagreeing with them about the solution to gun violence.

Then again, this is someone who spouts numbers that include suicides committed with a firearm as if they’re the same as murders. They’re not.

State Attorney General Letitia James on Saturday confirmed her office had issued subpoenas as part of an investigation related to the NRA. The New York Times reported the probe involved the group’s tax-exempt status.

Trump, a Republican, shifted the spotlight on Monday to Cuomo and James, Democratic officials in his home state, after divisions within NRA leadership surfaced.

“The NRA is under siege by Cuomo and the New York State A.G., who are illegally using the State’s legal apparatus to take down and destroy this very important organization, & others,” Trump wrote on Twitter without providing evidence.

“It must get its act together quickly, stop the internal fighting,” Trump said of the NRA.

And he’s right. This isn’t a good time to battle one another.

But how was Trump out of line on this?

The truth is that Cuomo has set himself in opposition to the president in pretty much every way. If Trump personally discovered a cure for cancer, Cuomo and folks like him would lash out at all the oncology department jobs that would be lost as a result of his discovery. Trump siding with a political ally isn’t exactly unconscionable, especially since it’s not like Cuomo is unbiased in this debate.

Cuomo’s so far up the posterior of groups like Everytown For Gun Safety that he doesn’t need to cast aspersions on anyone being beholden to any organization. He can pretend his motives are pure all he wants, but I’m not buying it. For him, it’s personal.