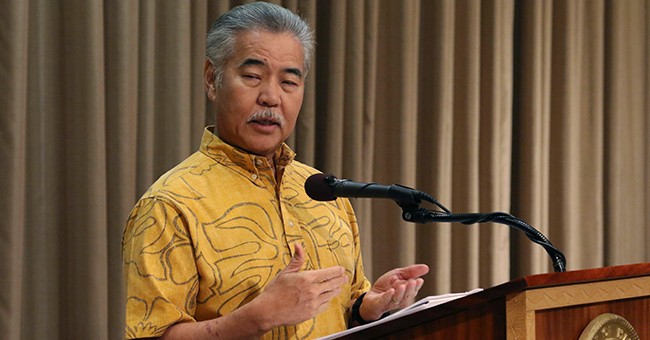 Hawaii sure looks like a beautiful place, but there’s no way in hell I’d live there.

After all, why would I want to live somewhere where gun owners are treated like criminals? That’s just how Hawaii rolls when it comes to firearms and the Second Amendment. It seems they don’t consider the right to keep and bear arms as anything beyond a suggestion – at best.

As if to prove that, local lawmakers have now implemented some new draconian rules for their state.

Hawaii Gov. David Ig has signed new laws forbidding those under age 21 from bringing guns into the state and made it easier for authorities to seize firearms without a trial. The bills included SB 600 and SB 1466, both of which passed the deep blue state legislature with ease.

Designed to prohibit individuals who are less than 21 years of age from bringing any firearm into the state, SB600 sets a minimum age threshold for those who wish to take their guns with them on a move to Hawaii. Currently, there is no minimum age for those who wish to bring guns into the state and even aliens can visit with firearms for the purpose of target shooting and hunting.

Police in Hawaii, under SB 1466, will be given a new tool in the form of “Gun Violence Protective Orders” which can be used to temporarily seize the firearms of someone that a third party has petitioned the court to consider possibly dangerous.

The new orders, part of a nationwide push for so-called “red flag laws” by national anti-gun organizations such as Everytown and the Brady Campaign, would allow for co-workers, educators, medical professionals or family members of an individual thought to be at risk of hurting themselves or others to ask a family court in the state for a GVPO. If granted in a hearing that doesn’t require the subject of the order to be present, the individual would have their gun rights suspended for a year.

While the subject of the order could request a further hearing to get their guns back — with the burden of proving they do not pose a significant danger by possessing firearms — the individual that applied for the order can also ask to have it extended for more than a year.

Neither of these bills represents a good thing for the citizens of Hawaii, though most would be hardpressed to recognize that fact.

In particular, their red flag law is particularly problematic. Frankly, denying someone their rights without due process should be something we universally uphold as wrong, and that’s precisely what this law does. It takes away a person’s guns because someone says they think that person poses some kind of a risk. Then the onus is on the individual to prove that assessment is wrong.

I’m sorry, but that’s not how our rights are supposed to work. Especially since many of those who can make the request are laymen and women who may not understand who actually represents a threat and who just makes them uncomfortable. For some, knowing a person owns a firearm is enough of a reason for them to label that person a risk. Meanwhile, that person would then have to prove they’re not one, which goes against the idea of being innocent until proven guilty. If they fail, the individual who initiated the order could ask for it to be extended to more than a year.

Are you freaking kidding me?

Hawaii sure is a beautiful state, but they’ve got an ugly core that can’t be ignored.