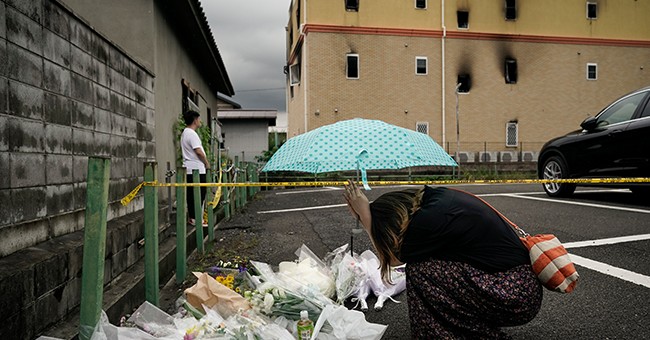 Last week, many of us noted with horror the fire that took place at a Japanese animation studio. Dozens died and did so in one of the most horrific manners possible.

However, despite it still being a mass murder–one more lethal than Parkland or Sandy Hook and a death toll on par with Virginia Tech if you include the slain killer–it got remarkably little play in the American media. It was reported as arson, then promptly forgotten.

A USA Today op-ed notes just why that is.

In terms of the death toll, this was Japan’s worst mass killing in nearly two decades, sending shock waves throughout the island nation. Globally, the impact was deeply felt within the anime community, including those attending an international anime convention held in San Diego. Beyond that, the reaction was hardly commensurate with the horrific nature of the crime.

All mass killings deserve US attention

The limited attention here in the United States cannot be explained away on account of distance. Compare the coverage with that of the mosque shootings last March in Christchurch, New Zealand, a location even farther from our shores. U.S. newspapers and wire services featured the Christchurch massacre five times as much as the Kyoto mass murder.

Sure, there are some differences between the two tragedies in term of victim count and motive. Thursday’s attack involved a personal agenda rather than a political one — never raising the dreadful specter of terrorism. The Kyoto massacre may not have been an act of terror, but the young victims undoubtedly experienced tremendous terror as the flames swelled around them and smoke invaded their lungs.

Writer James Allen Fox makes a valid point that we ignore mass killings from anything except for guns, with one exception. That’s terrorism, which tends to draw our attention quite well. I’ll add that if it’s terrorism with guns, well, that’s too addictive for the media to ignore.

He also goes on to note that we even tend to forget about American mass murders that don’t involve guns.

It would be hard to find adults anywhere in this country who do not remember when 12 victims were gunned down at a cinema in Aurora, Colorado, in 2012. It would be equally difficult to find folks outside of Nevada who do recall when 12 victims succumbed to smoke inhalation at a Reno hotel in 2006, when an irate resident set fire to a stack of old mattress and caused the building to become engulfed in flames.

Few outside of New York City likely recall the 87 killed in 1990 at the Happy Land nightclub in a fire deliberately set by a ex-boyfriend of an employee. The death toll was nearly twice as high as Orlando’s Pulse nightclub massacre in 2016, a crime that remains fresh in our collective memories.

He’s not wrong. I only barely recollect the Happy Land fire, enough to recognize that it happened if someone mentions it to me, but damned if I remember any details.

The truth is, few in the media care about fires. They don’t drive political agendas and make people vote for restrictions of their own civil liberties. People accept fire as a force of nature, even if it was intentionally started.

Shooters, on the other hand, they can spin. They can frame it as evidence we need to advance gun control. Mass shootings trigger (no pun intended) that part of their psyche that has to “Do Something (TM)” so they start writing stories. They start filming interviews and other such things. They delve deep into the morass that is the aftermath of a mass killing and provide wall-to-wall coverage.

They never bother to think if these people would use something else to commit these horrific crimes. They never ask, “Was this person so deeply disturbed that had it not been a gun, it would have been a fire or a van?”

They don’t ask because they don’t care.

The reason the fire in Japan doesn’t get more play is that it doesn’t do anything for them. They can’t spin it, make it a bigger story, so they don’t devote the coverage to it. They’ll save that for when they can push to take away our right to keep and bear arms.

Prosecutor Made The Right Call In Dropping Charges Against Kenneth Walker