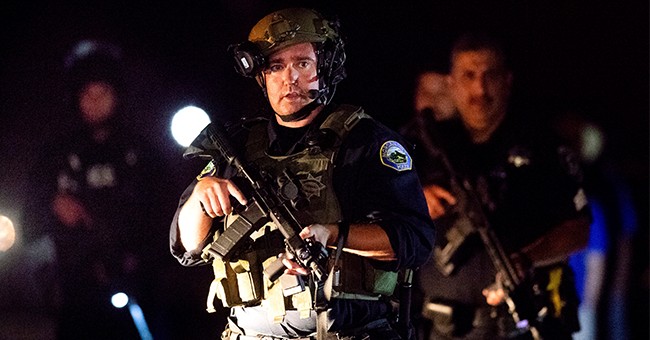 Just about every time we see a mass shooting, such as the one in Gilroy, we find that it took place in a gun-free zone. By that, since it seems some people don’t actually understand what the term means, we are talking about locations that prohibit private citizens from carrying guns. This does not and has never applied to places where the police can go armed because, well, the police can go armed pretty much anywhere.

But gun-free zones are likely to have a minimum of armed opposition for the gunmen, which is why a lot of them pick them as targets.

How many? Almost 90 percent of them.

A study from the Crime Prevention Research Center (CPRC) shows 89 percent of mass shootings between 1998 and June 2019 occurred in gun-free zones.

CPRC reports 21st mass shooters are not typically religious, “80 percent are at least 21 years of age,” and the majority of them–56 percent–views handguns as the weapon of choice for an attack.

In other words, the entire narrative falls down about how gun-free zones work.

With regard to Gilroy, since Media Matters wants to point argue that it wasn’t a gun-free zone at all, let’s address their points one by one and how it applies to this study.

Less than one day after a gunman opened fire at a California food festival, killing three people and injuring at least 12 others, conservative media ran with the tired and false claim that the festival was a “gun-free zone” because event attendees were prohibited from bringing guns and other weapons.

That’s precisely what the term means. The phrase “gun-free zone” is a legal term in many states, meaning a location where private citizens are legally barred from carrying a firearm, even with a concealed carry permit. Some of these are legally mandated, such as schools, while others are at the discretion of the owners, like some restaurants.

In reality, the event reportedly had “very tight” security including armed police officers who were able to engage and neutralize the gunman in less than a minute. Despite the popularity of the pro-gun “good guy with a gun” myth, civilian gun owners typically do not take down mass shooters and can actually contribute to the overall chaos.

That’s because police have official duties. In Gilroy, that included providing that “very tight” security, which meant most of those police were likely near the entrance. You know, the place the killer bypassed?

Anyway, because they have official duties to perform, they aren’t everywhere. That’s why claiming their existence somehow makes a place something other than a gun-free zone is beyond ridiculous.

So why the Orwellian effort to redefine the term?

Probably because on some level, they suspect that we’re right, that mass killers target places were private citizens can’t carry guns. They may disagree about the effectiveness of armed citizens–they’re wrong, mostly because when an armed citizen is on hand, such event rarely turn into mass shootings–but it doesn’t matter what the progressive media thinks. What matters is what the gunmen think.

And, as we know, 89 percent of all mass shootings take place in gun-free zones.

So by shifting the term to mean places where no one has a gun at all, places like Media Matters want to reframe it so that the public will be misled. Meanwhile, Snopes wants to accuse a satire site of doing that while giving Media Matters a pass.

I don’t care what a progressive website that exists to silence the opposition media wants to claim, gun-free zones kill. That’s just plain and simple.

Ralph Northam And Liberal Hypocrisy On Guns And Race

Ralph Northam And Liberal Hypocrisy On Guns And Race