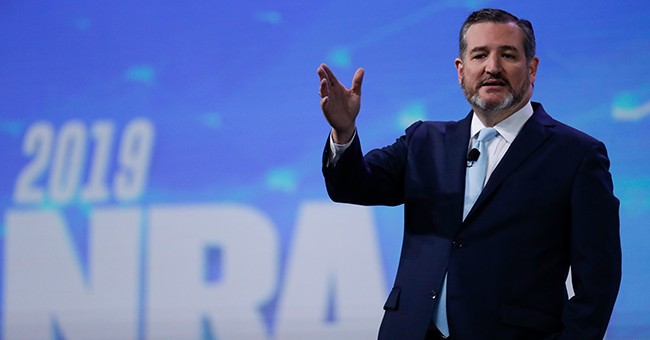 As Cam noted earlier this week, a number of CEOs have decided to throw their collective hat into the political arena, not as potential candidates but as advocates pushing gun control. It’s an odd strategy to take, to be honest.

While corporate honchos have long intersected with politics, it’s usually been in regard to things that directly impact the companies they run. Auto safety would call for the CEOs of the Big Three to head to offer their thoughts. Banking regulations would spark comments from Financial CEOs. Things like that make sense in the grand scheme of things.

Make a stand on gun control, not so much.

Sen. Ted Cruz, however, had some thoughts on this development.

Sen. Ted Cruz (R-Texas) on Thursday warned that corporate CEOs are making a mistake by wading in the charged political debate over gun control in Washington.

“I don’t think it’s a positive thing to see big corporations shifting their focus from their customers and actually doing what they were created to do into trying to become political players on divisive social issues,” Cruz said at a breakfast sponsored by the Christian Science Monitor.

Cruz said he thinks the CEOs are more motivated by a desire to win approval from their “country club” friends than a full understanding of gun violence and public policy.

The problem is, none of these proposals have been shown to really make anyone safer, except maybe from themselves.

Universal background checks don’t stop the vast majority of criminals from getting guns and there’s not a single mass shooting that would have been stopped by them either. The only potential case was the Odessa shooting, and that was a gun built for sale by an unlicensed manufacturer. He was breaking the law just by selling the gun. Does anyone really think a background check would have been conducted even if required?

The thing is, most of the CEOs don’t even seem to understand what they’re talking about. Cruz knows. He’s spoken to them.

“I will note with at least one of those banks that came out with one of those oh-so-brave corporate letters, when I sat down with their leadership and actually asked them about it, the people who wrote the letter didn’t know the first thing about the substance,” Cruz said.

Cruz recalled that when he asked a bank engaged in a business boycott of companies that manufacture certain types of semi-automatic rifles to explain its action, the executives he met with couldn’t even define what made a firearm an “assault rifle.”

“I asked what seemed like a fairly reasonable follow-up question … I said, ‘Can you tell me what’s an assault weapon?’ I tell you the people who wrote the letter had absolutely no idea,” Cruz said.

Cruz said he’s highly skeptical whether the CEOs who signed Thursday’s letter to the Senate have a strong grasp of the issues being debated.

Recently, I wrote about how a lot of people seem to like various propositions until the rubber meets the road. They love universal background checks until it’s time to actually vote on them, then they see all the ways the legislation is a complete trainwreck.

These CEOs aren’t immune to that by any stretch of the imagination.

Further, there are a couple of other facts that I think we should reflect on. For one, these CEOs have a broad knowledge base on how to run a company. I’ll give them that. However, that doesn’t mean they have any particular knowledge on anything outside of it. To be sure, some probably do, but not necessarily. There’s absolutely nothing about them that warrants us giving them any more attention than if 145 auto mechanics or 145 bus drivers asked for the same thing. Their status doesn’t imply expertise beyond the business world.

Another point worth remembering is that while they say they’re taking this action on behalf of their employees, and effort to keep those employees safe, not all of those employees are going to agree with that. Many are Second Amendment supporters who would prefer not be drawn into this in such a way. Pretty much every company in the nation has a fair number of Second Amendment advocates employed there to some degree or another. These CEOs don’t need to try and speak for them. They don’t have that kind of authority.

Plus, as Cruz points out, most of them don’t know what the hell they’re talking about anyway.

Prosecutor Made The Right Call In Dropping Charges Against Kenneth Walker