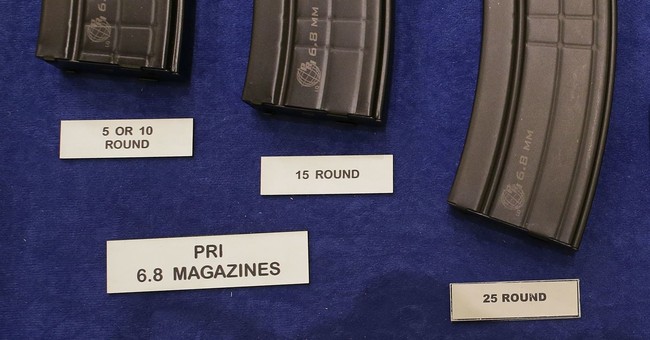 It’s easy to get into a very binary kind of thinking when it comes to politics and guns. We tend to think of Democrats as being anti-gun and Republicans being pro-gun.

To be fair, the Democrats that have been elected at the federal level in recent years really do seem to buy into that stereotype. More than that, they seem to outright revel in it. They’re anti-gun and they love that fact about themselves.

But the flip side isn’t always true. While most allies of the Second Amendment within the halls of Congress are Republican, that doesn’t mean it’s universal within the party.

For example, there’s at least one candidate for the Virginia House of Delegates who seems to disagree with that stance.

A Republican running for the Virginia House of Delegates is calling for stricter gun control, a message at odds with GOP leadership and virtually every Republican officeholder in the state.

In a TV ad that begins airing Tuesday, Mary Margaret Kastelberg calls for more background checks, limits on magazine size and a “red flag” law that would allow authorities to temporarily take guns away from people deemed a danger to themselves or others.

“Nobody needs a 100-round magazine,” said the first-time candidate who is running for a suburban Richmond seat.

Her positions, she said, are “all grounded and rooted in where I am personally, my cumulative life experience.”

By that, she doesn’t just mean the mass shootings like Virginia Beach or the 2007 massacre that killed 32 at Virginia Tech, where her two children are enrolled today. She also means the murder two years ago of a young man who played in Tuckahoe Little League with her son when they were little — and all the suicides that involve guns.

“I’m coming from — just looking at things that might” be helpful, Kastelberg said. “Unfortunately, this is a really complex issue and it’s highly emotionally charged. I don’t believe . . . that any one thing is going to fix all of this. One of the perils that I see is rushing into something with the expectation that, ‘Oh, now we’ve solved the problem and can move on.’ ”

In the ad, Kastelberg looks at the camera and says, “I’ll do what’s right to keep our communities safe. We’ve got to work together to reduce gun violence. That starts with comprehensive background checks and closing the gun show loophole. And nobody needs a 100-round magazine. ‘Red flag’ laws will help take guns out of the hands of the mentally ill before they do harm. As a mother and a delegate, I’ll work to stop gun violence to keep our loved ones safe.”

No one needs internet access, social media, or a cell phone. Are we going to restrict those next? No one needs to own a car. Is that on the agenda for banning too?

That’s the problem with the argument of “no one needs.” Rights don’t begin and end with need.

However, it’s also worth discussing the fact that she’s not in any position to judge whether or not someone needs a given item or not. While I’m not a fan of 100-round magazines for personal reasons, I don’t want to see them get restricted, either. There are cases I can see when having 100 round ready to roll should you need it can come in handy. A case in point.

Kastelberg is free to have any opinions she wants, but I will say that there’s no way in hell she supports the Second Amendment. Then again, she’s running to replace a Democrat, so if she won, it’s unlikely anyone in her district would recognize a difference.