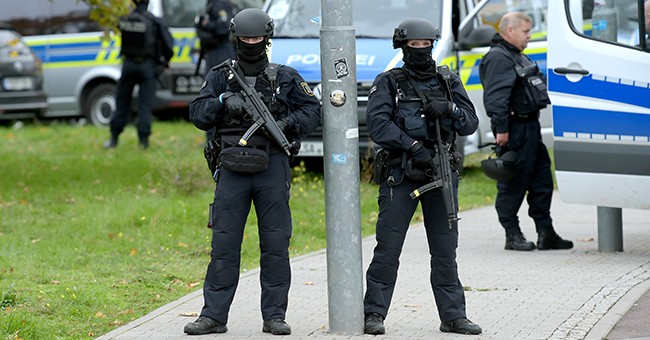 The anti-Semitic terrorist attack yesterday in Halle, Germany didn’t result in as many deaths as we usually require to be considered a “mass shooting.” The FBI’s definition of mass murder is four or more people killed in a single location. For a mass shooting, most of us take that same definition but require those killed to be shot.

Halle only resulted in two deaths. However, it also sounds like it could have been much, much worse.

Streaming live from a camera mounted on his helmet, a gunman pushed on the doors of a synagogue, fired several shots at a lock on the door, stuck an explosive in a door jam and lit it.

But he couldn’t get in.
The fact that the door held likely spared the lives of the dozens of people inside the synagogue on Yom Kippur, the holiest day in the Jewish calendar.

It just goes to show that physical barriers can do a lot to help prevent a mass shooting. It wouldn’t have helped if the gunman had gotten past it, obviously, but it’s evidence that hardening a target can save lives.

However, we do know more about the weapon the killer used. More importantly, we know how he circumvented gun control laws which are supposed to prevent things like this in Germany.

It seems he built his gun himself.

The deadly attack carried out by a masked gunman in eastern Germany would have ended with many more victims if his homemade firearms had not malfunctioned, footage broadcast on a livestreaming platform suggests.

The gunman, who tried to force his way into a synagogue in the town of Halle on Wednesday before killing two people, broadcast his rampage on the Twitch platform.

The footage shows the suspect becoming increasingly frustrated as his homemade weapons repeatedly malfunction. In at least three instances the video shows the suspect pointing a gun directly at a victim only for the weapon to jam.

Calling himself a “loser”, at one point he says: “I have certainly managed to prove how absurd improvised weapons are.”

A mission statement that he uploaded to Kohlchan – the German message board equivalent of 4chan – where it was later found by researchers at the International Centre for the Study of Extremism at King’s College, London, appears to confirm the use of homemade firearms built according to plans released by a British pro-gun activist from West Yorkshire.

Now, let’s be clear, these homemade firearms have been manufactured all over the world and actually do work when made correctly. The shooter failed to test his weapon and make any required fixes prior to his attack. Thankfully.

Some may argue that this proves gun control works, but it actually proves the opposite.

In a world where people can make guns at home–a condition that predated the 3D printer by decades–attempting to keep guns out of the hands of criminals is a fool’s errand. People like this can build their own if they so desire. There’s no reason these guns haven’t been used in more attacks except for the fact that no one has bothered to do so just yet. That’s it.

Maybe the best answer Germany can make is to deregulate firearm ownership so people would be free to fight back should another such attack take place.

Anyone taking odds on that happening?