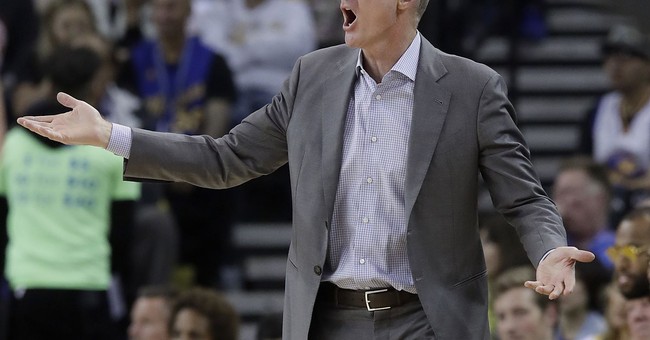 Last week, I took Golden State Warriors’ coach Steve Kerr to task over his anti-gun remarks. Honestly, I’d given the guy a pass for a while because his father had been shot to death and he’s a basketball coach, not someone who really has a say over our lives.

However, he was also trying to deflect after being questioned about China, an ongoing scandal within the NBA circle.

As Washington Free Beacon‘s Steven Gutowski notes, this is a pattern among leftists in the midst of a scandal.

Kerr did not elaborate on why he believes the civilian right to own certain rifles or the criminal use of firearms constitutes a human rights abuse, but his pivot to the issue as he and his league sought to defuse a mounting scandal is just the latest example of progressive figures touting their support for gun control as they seek to defuse scandals that have supporters across party lines.

In the midst of a scandal sparked by revelations that he had dressed in blackface in his late 20s, Trudeau said he would institute a new gun ban if reelected later this month.

Virginia governor Ralph Northam (D.) and attorney general Mark Herring (D.) followed a similar strategy in their first major policy remarks after their own blackface scandals. Northam apologized earlier this year for appearing in a picture found in one of his yearbooks that featured a man in blackface and another in a KKK robe. In the subsequent uproar, Herring admitted that he too had worn blackface.

Lt. Governor Justin Fairfax, also a Democrat, appeared alongside Northam and Herring in their first major post-scandal press conference. It was also Fairfax’s first significant political appearance since being accused of sexual assault by two women.

As Gutowski noted, even #MeToo catalyst Harvey Weinstein tried this trick shortly after revelations surfaced of his nefarious deeds.

It didn’t work out nearly as well for Weinstein.

Yet the question is, why is this the issue they pivot to when faced with a scandal? Especially since Weinstein did it first and it didn’t work out worth a damn for him.

The question really boils down to two things. One is the perception of one’s ability to do anything about guns. Weinstein’s gambit didn’t work particularly well because he was part of Hollywood, not Washington. All he could do is try to raise money and pressure politicians. Since he was already accused of pressuring people to do things, it didn’t play well for him.

The other is timing. Weinstein tried this in the pre-Parkland world.

Trudeau, Northam, and Fairfax, however, get a pass in part because their misdeeds came after Parkland and all three are involved in passing legislation to some degree. They can deflect the scandal because they can, in theory, have an impact on gun laws in their states or nations.

Anti-gun voices in the media are like ADHD squirrels. They see gun control as a shiny object and immediately become distracted with whatever there was before, so they ignore the very real scandal and focus on the new effort.

It worked quite well for Northam who went from barely holding onto his seat to having the media be so sympathetic over the evil Republicans thwarting his sincere gun control efforts following Virginia Beach that weren’t motivated by him having paraded around in black face back in the day.

So what good has it done Kerr? Probably not much. Kerr’s saving grace right now is that LeBron James stepped deeper into the crap than he did. When the league’s biggest star says something this stupid, someone like Kerr gets more of a pass.

Again, the media is an ADHD squirrel and King James just pulled out the shiny object.

Something Is Very Wrong With Minneapolis Police