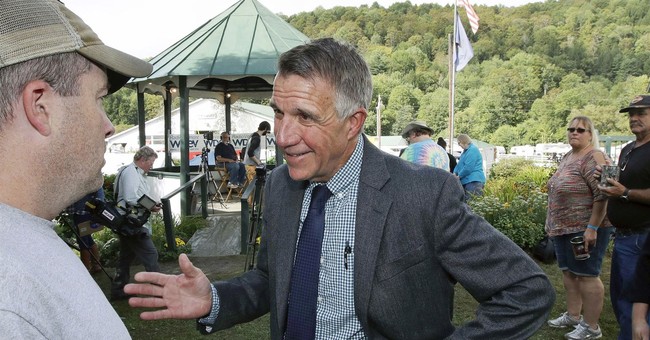 However, what happens when a Republican backs gun control? Much of the time, they find themselves facing a primary challenge, something an incumbent would really rather not have to endure. That’s what’s happening to Scott now.

Klar is a farmer and lawyer from Brookfield who describes himself as an ‘Agripublican.’ He says he wants to shrink taxes and regulations, claiming that Vermont’s bureaucracy has grown out of control.

“Government has grown like a bloated tick off the blood of working Vermonters. It’s time to pop it, make sure we get the head out to make sure there’s not an ongoing infection,” Klar said.

While his driving issues don’t seem to be about guns, the topic did come up. He told WCAX that he wasn’t going to try to repeal the laws Scott passed, but he also wasn’t going to pass anything new, either. “I don’t have a gun agenda. I’m not proposing any new freedoms for guns. We’ve already lost sadly, thanks to Phil Scott,” he said.

That may well be true, and while Klar may not be driven by gun control, let’s not fool ourselves. Klar stands a better shot in the primary because Scott stabbed gun owners in the back, and I think he knows it.

Realistically, repealing those laws would be far trickier than some might like to think. Democrats hold a majority in both chambers and are pretty unlikely to backtrack on key party issues this soon after passing them. It would take something major to force their hand and Vermont hasn’t had anything that qualifies.

Klar taking a step back from that should keep the gun control crowd from jumping on him during the primary, which makes a good bit of sense. Yet he’s also laid the fault for Vermont’s current gun control woes as Scott’s feet, which is pretty accurate.

The big question is whether or not Klar has a chance, and that remains to be seen. Scott still enjoys the power of the incumbency, after all. He’s got the edge in the long run just because of that. Plus, I suspect the state party won’t be pushing Klar too much. The last thing they want to do is back a challenger and he end up losing, thus alienating that incumbent. Not a good look.

Still, it means that Vermont’s gubernatorial primary season might end up becoming something worth watching for gun rights advocates. At least Second Amendment supporters in the state will have a candidate who doesn’t seem interested in screwing them over to back. That’s got to count for something, right?

For what it’s worth, I’ll be keeping an eye on this race going forward. I’d love to see Scott bounced and he be replaced by someone who at least shows the Second Amendment some respect.

VA Delegate Proves He Knows Nothing About Guns, Still Wants To Ban Them

What The Trace Misses On Gun Industry Protections

What The Trace Misses On Gun Industry Protections