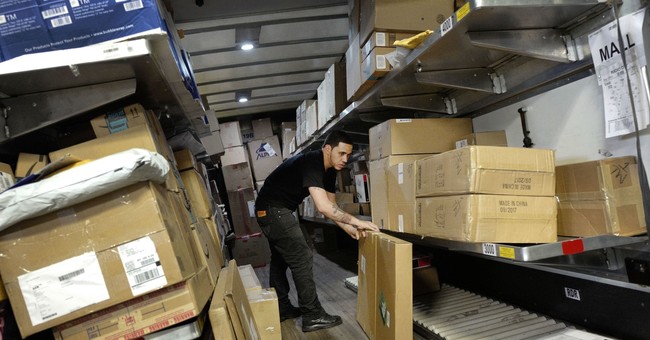 Guns have to be shipped all over the country. You either buy them from somewhere else and ship them to your FFL or your gun store buys them and has them shipped to their store. Either way, they have to go on a truck.

For many guns, that means using a commercial carrier like UPS or FedEx.

Unfortunately, it seems that such a method isn’t the most secure.

Kinney and Peters also have been charged with criminal conspiracy, according to the sheriff’s department.

Now, I’m not going to dog on UPS. They’re not responsible for the illegal acts of their employees and there’s no reason to believe there was anything in those employees’ backgrounds to suggest they shouldn’t have been hired.

It’s a case of “stuff happens.”

Unfortunately, any guns stolen in this manner simply end up in the black market.

Yet, I’ll also point out that this is going to happen when guns can’t be shipped to individual people’s homes.

You see, when people buy guns from out of state, they have to go to an FFL holder. That usually means a gun store. So, when the return address might be a gun store or firearm manufacturer and the recipient is a gun store, the bad guys have a pretty good idea of what’s in the box. They know it’s probably a firearm, especially if it’s over a certain weight.

But if those guns were shipped to someone’s home, that wouldn’t be the case. Then there’s an element of doubt in the bad guys’ minds. It might stop some of this, especially if the shipper gets creative with their name somehow.

Until we can have guns shipped directly to our house, though, we’re likely to see plenty more of these kinds of things. Luckily, they’re still fairly rare, but only because most people who are inclined to steal like this get caught stealing long before they can get in a position to pull this kind of crap. They’ll fail the background check and not get the job.

Yet some make it through, and that’s yet another way these guns end up on the black market. Plus, they deprive law-abiding gun owners of the firearms they purchased by have never even gotten the chance to shoot. That makes it just that much worse, in my opinion.

Luckily, we have an idea how to curb this. Sure, background checks by companies like UPS help, but maybe some tougher sentencing will do the trick. I mean, this guy got 42 years for his gun thefts. Lower the boom like that a few thousand more times and you’ll see this kind of thing come to an abrupt halt.